Pakachoag was one of the three major villages of the Nipmuc Indians in Worcester County in the seventeenth century [2; 5]. The Nipmuc (which translates to "fresh water people") called the area Quinsigamond (or "pickerel fishing place"). A settlement and plantation by the same name was created in 1674 by around thirty English settlers, after a survey and purchase of eight square miles of land by Daniel Gookin. Gookin was deeded the property by Sagamore John, who later joined King Philip's Wampanoag in their uprising against the English [4]. Though nothing remains of the Pakachoag Village except the freshwater spring, Professor Thomas L. Doughton of College of the Holy Cross recently established the New England Native Preservation Trust with the goal of preserving the site [3]. 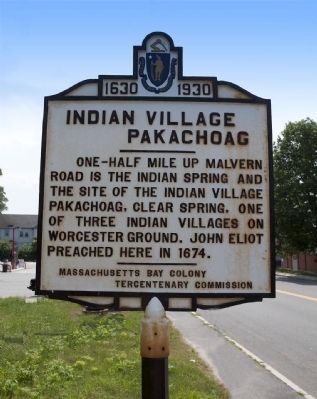 A group of Nipmuc Indians (image from Go Local Worcester) 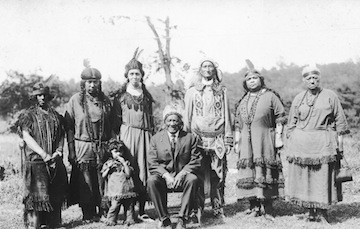 Pakachoag was one of the three major villages of the Nipmuc Indians in Worcester County in the seventeenth century. The other two were Tataesset (Tatnuck) and Wigwam Hill (North Lake Avenue) [2; 5]. The Nipmuc (which translates to "fresh water people") called the area Quinsigamond (or "pickerel fishing place"). A settlement and plantation by the same name was created in 1674 by around thirty English settlers, after a survey and purchase of eight square miles of land by Daniel Gookin. Gookin was deeded the property by Hoorawannonit (also known as Sagamore John, Woonaskocha, or Sagamore Solomon) for only twelve New England pounds and a down payment of two coats and four yards of cloth. That September, Reverend John Eliot (translator of the first Bible in the Algonquin language) visited the village of Pakachoag, along with two Christianized Nipmucs: Wattasacompanum, the tribal leader, and Minister James Speen. The visit resulted in the conversion of Pakachoag to a "praying town" [1; 2]. Unfortunately, Christianity was not the only thing the settlers spread—80% of the American Indian population of New England had been killed by smallpox and other European diseases between 1620 and the time of Pakachoag's conversion, and conflicts resulted as the settlers encroached on Nipmuc territory [5].

From June of 1675-August 1676, Metacom (nicknamed King Philip by the English), leader of the Pokanoket tribe of the Wampanoag Indian Federation, led the Wampanoag and Nipmuc Indians against the English in what became known as King Philip's War, Metacom's Rebellion, or the First Indian War. As the son of Massasoit, who had helped the Pilgrims survive their first winter at Plymouth, Metacom had subsequently watched the spread of the English and their diseases while his own people died and lost their land. When an English farmer's cattle destroyed a native corn crop, a group of Wampanoag killed the livestock responsible; the farmer retaliated by killing one of the Indians [4]. Conflict erupted, and the Wampanoag were joined by the Nipmuc of central Massachusetts under Sagamore John, as well as the Agawam, Pocomtucks, Squakheags, and Norwottocks of the Connecticut River Valley (also known as Pioneer Valley). The town of Brookfield was razed to ashes, the town of Deerfield abandoned, 71 soldiers killed at Bloody Brook, and most villages between Marlboro and Grafton destroyed [2; 4; 5]. A company under Captains Henchman and Sill, believing the village at Pakachoag to be deserted, slept in the empty wigwams there while the inhabitants hid, returning only after the soldiers departed. The Quinsigamond Plantation had been abandoned by the English, and the empty buildings were burned by the Nipmucs on December 2, 1675 [2]. The English settlers responded by destroying Indian villages indiscriminately, even the Christianized "praying" villages, kidnapped the children of tribes who had not yet joined the attack in order to coerce them into neutrality, and preemptively attacked the neutral Narragansett tribe in the Great Swamp Massacre. The Puritan New Englanders claimed unorthodox beliefs had brought on the attacks as a punishment from God, and hung many Quakers and Christian Indians. The main Indian camp was attacked by Captains Turner and Holyoke in May, after a hard, hungry winter for both sides; though Turner was killed in the counterattack and fighting continued through the summer until King Philip's death in August, the tribal alliance fell apart after the destruction of the camp [4].

Afterward, less than 1,000 American Indians remained in the Worcester area, the rest having been killed, having fled to the north or west, or been sent to Deer Island Reservation, where many died of starvation and exposure [2; 5]. When it had become clear that the English would triumph, Sagamore John had allied against King Philip's forces, proving his loyalty in Boston by capturing and executing Matoonas and his son Nehemiah. The English were unconvinced and arrested John and his men, executing eleven on Boston Common, selling thirty as slaves in the West Indies, and interring the rest at Deer Island. Some of the Nipmucs, including Sagamore John, escaped back to Pakachoag in July of 1676 [2]. When the English tried to resettle Quinsigamond, John led raids against them until the town was abandoned for a second time. Eventually, the town was settled a third time, this time peacefully, with Nipmuc (especially women, as the war had left a shortage of Nipmuc men) intermarrying with English and African American residents of Worcester and building English style homes of their own, later fighting in the Revolutionary and Civil Wars. The Hassanamisco Reservation became the center of Nipmuc tribal activity, though many settled in the Beaver Brook and Laurel-Clayton areas of Worcester [2; 5]. The Nipmuc tribe at Hassanamisco has been led since the 1920s by the Cisco family, who created the Mohawk Club for tribal education, culture, and social events. The Nipmuc Indian Chapter of Worcester was established during the 1950s, the Hassanamisco Indian Museum was founded in 1962 by Sarah Coscoe Brough, and in 2004 the tribe became federally recognized as the Nipmuc Nation [5].

Though nothing remains of the Pakachoag Village except the freshwater spring, Professor Thomas L. Doughton of College of the Holy Cross recently established the New England Native Preservation Trust with the goal of preserving the site [3].

One-half mile up Malvern Road is the Indian spring and the site of the Indian village Pakachoag, clear spring, one of the three Indian villages on Worcester ground. John Eliot preached here in 1674. / Erected 1930 by Massachusetts Bay Colony-Tercentenary Commission [1]