The Hubert H. Humphrey Metrodome was a domed sports stadium located in Minneapolis, Minnesota from 1982 until it was torn down in 2014. It opened in 1982 as a replacement for Metropolitan Stadium, the former home of the National Football League's (NFL) Minnesota Vikings and Major League Baseball's (MLB) Minnesota Twins, and Memorial Stadium, the former home of the Minnesota Golden Gophers football and baseball teams. The Metrodome was replaced by the newly built U.S. Bank Stadium.

The Hubert H. Humphrey Metrodome was built in 1982 and torn down in 2014 to make way for the U.S. Bank Stadium. 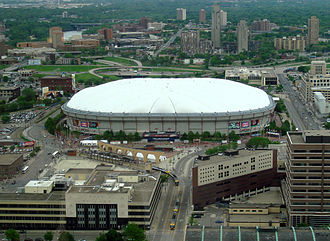 Vikings Football Field in the Metrodome 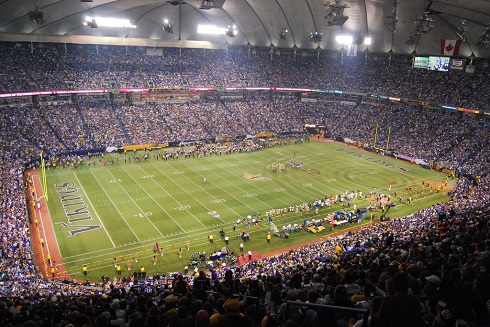 Minnesota Twins Field in the Metrodome 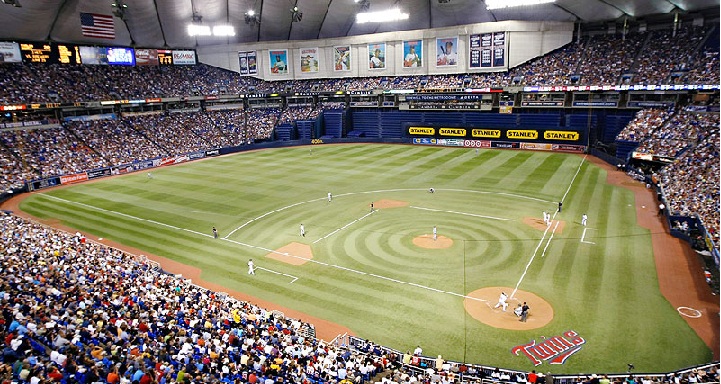 The Metrodome was built because by the 1970’s the Vikings were relatively unhappy with the small seating capacity of the old Metropolitan Stadium, which had a seating capacity of just just under 48,500. Before the AFL-NFL merger, the NFL had declared that stadiums with a capacity smaller than 50,000 were not adequate for their needs. The biggest stadium in the area was the University of Minnesota's Memorial Stadium, but the Vikings were not willing to be tenants in a college football stadium and demanded a new venue.

Construction on the Metrodome began on December 20, 1979, and was funded by a limited hotel-motel and liquor tax, local business donations, and payments established within a special tax district near the stadium site. Construction lasted for nearly 10 years and the stadium was named in honor of former mayor of Minneapolis, U.S. Senator, and U.S. Vice President, Hubert Humphrey, who died in 1978.

The roof of the Metrodome was one of the most remarkable aspects of the building. The Metrodome's air-supported roof was designed by the inventor of air-supported structures, David H. Geiger. An air-supported structure supported by positive air pressure in order to keep it inflated. The air pressure was supplied by twenty 90-horsepower fans. The roof was made of two layers. By design, the dead air space between the layers insulated the roof; in winter, warm air was blown into the space between layers to help melt snow that had accumulated on top. At the time it was built, the 10 acres of fabric made the roof the largest expanse ever done in that manner. The entire roof weighed roughly 580,000 pounds. It reached 195 feet, or about 16 stories, at its highest point.

Because it was unusually low to the playing field, the air-inflated dome occasionally figured into game action. Major League Baseball had specific ground rules for the Metrodome. Any ball which struck the Dome roof, or objects hanging from it, remained in play; if it landed in foul territory it became a foul ball, if it landed in fair territory it became a fair ball. Any ball which became caught in the roof over fair ground was a ground rule double. That has only happened three times in its history – Dave Kingman for the Oakland Athletics on May 4, 1984, University of Minnesota Gophers player George Behr and Corey Koskie in 2004.

In 2009, Mall of America purchased naming rights for the field at Metrodome. The contract stated that the field would be called "Mall of America Field at Hubert H. Humphrey Metrodome" for a three-year period, beginning October 5, 2009, and ending February 28, 2012. The name was still used for the 2012 and 2013 seasons.

On December 12, 2010 a severe snowstorm hit the Minneapolis area with 17 inches of snow. The snow and strong winds made it unsafe for the snow removal crew to clear the roof. The roof started to "sag" and a Fox Sports film crew started rolling their cameras because they noticed water leaking from the roof. The roof collapsed which caused the Vikings game against the Giants to be postponed which was then later played in Detroit. The rest of the Vikings home games this season were played at TCF Bank Stadium.

With the approval of the new Vikings stadium at the Dome site by the Minnesota legislature, the fate of the Metrodome was sealed. The Vikings played their final game at the Metrodome on December 29, 2013, beating the Detroit Lions 14-13. The following day, a local company began removal of seats for sale to the public and various charities and nonprofits. Individual chairs went for $40/each to charities, $60/each to the public, and $80 apiece for specific seat requests. The dome was completely demolished by April 11, 2014.