Robertson Stadium was built in 1941 and grew to a capacity of 32,000 prior to its demolition in 2012 and the construction of the new TDECU stadium. Robertson Stadium was home to the teams in the Houston Independent School district upon its creation. It woud later be expanded and hold a number of games for several professional and collegiate teams such as the Houston Oilers (American Football League), Houston Cougars (University of Houston), Houston Dynamo (Major League Soccer), and hosted a scrimmage between the Houston Texans and the Dallas Cowboys (National Football League). The stadium was the center of football and soccer in Houston for many of its 71-years, from its construction to 1941 to its demolition in 2012. TDECU Stadium is now located where Robertson Stadium once stood.

Robertson Stadium stood at this location from 1941 to 2012 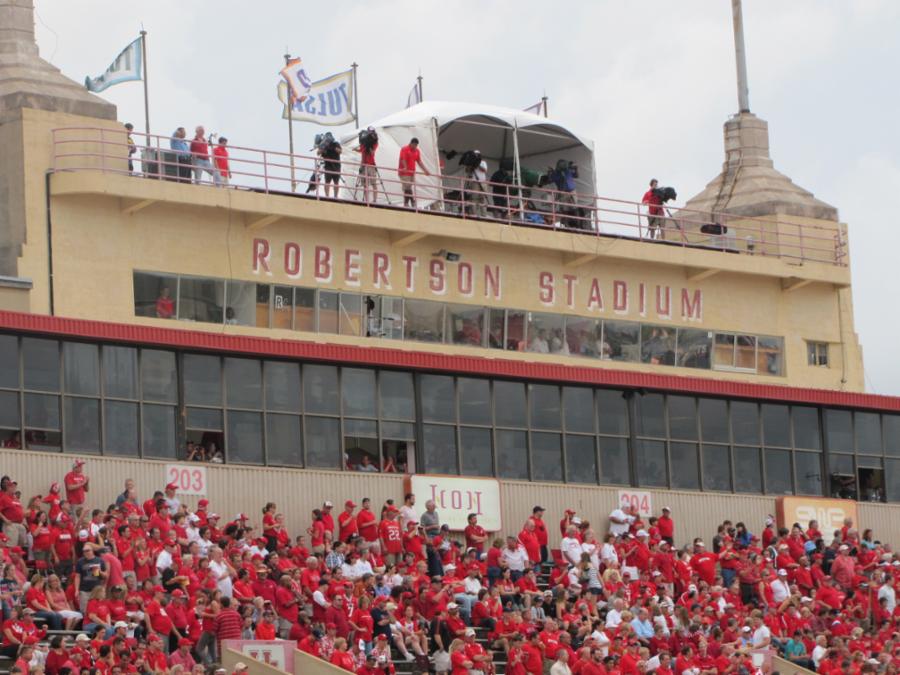 An aerial view of Robertson Stadium 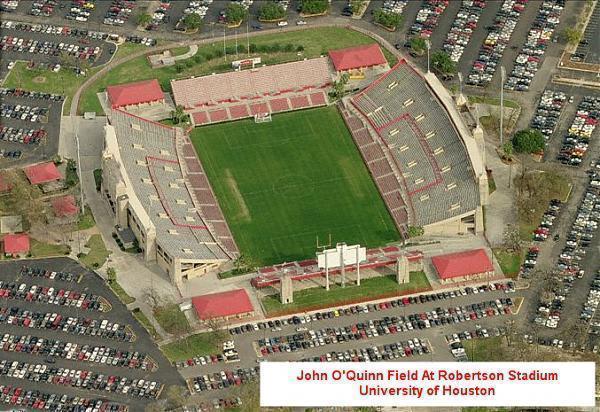 Robertson Stadium began it's life as "The Public School Stadium" for the Houston Independent School District (HISD), with a seating capacity of 14,500. It was built as a partnership between the HISD and the Works Progress Administration-a federal agency that provided funding for public works projects during the Great Depression. Construction of the stadium was completed by the Fretz Construction Company.

The first game to be played in the stadium was Lamar High School vs. W.H. Adamson High School. Eventually, the Houston Cougars would begin to share the field with the HISD as it was built near their new campus. The Houston Cougars would continue to share this field until the end of 1950. In 1958, the stadium was renamed to Jeppesen Stadium. In 1960, The Houston Oilers joined the American Football League, and leased the field to use as its home stadium.

In 1957, the HISD decided to create a policy to ban any and all Black players from playing on the field. Up until this date, there was no ruling although it appears that the teams that played here did not include Black athletes. The local NAACP led a protest against the discriminatory rule against Black players in 1961. The NAACP formally requested that the Oakland Raiders join their protest by refusing to play Houston unless they changed venues or pressured management to rescind the ban. The Raiders declined the NAACP's request and players and fans harassed civil rights leaders and supporters outside the stadium prior tot he game.

In 1964, the Oilers left the stadium for Rice Stadium. In 1966, the University of Houston would start to create a plan that would allow for the purchase of Jeppesen Stadium. It was finally purchased in 1970 for 6.8 million dollars and was renamed Robertson Stadium in 1980. The stadium underwent two million dollars of additional renovations in 1983 in order to prepare for hosting he NCAA Track and Field Championships. More updates and a new scoreboard was added in 1995. Although the stadium was purchased in 1970, and several upgrades took place, Houston would not play a regular home game there until 25 years later in 1995, when Houston split it's home games with Robertson Stadium and The Astrodome. In 1998, Robertson became the permanent home for the University of Houston, which invested more money to renovations in 1999 that increased its capacity to 32,000.

2006 brought the Houston Dynamo soccer team of Major League Soccer into the picture, and they would perform more renovations. These renovations included a new scoreboard, and new stadium lights. This was their home field through the 2011 season, after which they departed for BBVA Compass Stadium, which is a soccer-only facility.

In 2009, a plan was introduced to alter the stadium dramatically by building a new upper deck which would increase capacity to 50,00. Before this renovation could take place, the athletic department of Houston changed leadership, and the new leaders conducted a feasibility study that determined the lifetime cost of renovating and restoring the stadium was greater than the estimated cost of building a new facility. At the end of the 2012 season the stadium was demolished and construction began on the new TDECU Stadium.