St. Louis' baseball roots begin at this location, home to the Grand Avenue Ball Grounds in the 1860s and 1870s, two different ballparks that were both known as Sportsman's Park from the late 19th century to the 1950s, and Busch Stadium during the 1950s and 1960s. Baseball was played at a park at this location at least as early as 1867. Bleachers were added in 1881 and the park became the home of the St. Louis Brown Stockings. The Browns created a new stadium in 1892 a few blocks from this location. (This wooden stadium was destroyed by fire twice, rebuilt twice, and eventually became Robinson Field). During these years, the team changed their colors from brown to red and changed their name to the St. Louis Cardinals in 1900. The following year, the Milwaukee Brewers franchise relocated to St. Louis, changed their name to the St. Louis Browns, and built a new park at this location using the former name of Robinson Park. This second Sportsman's Park was made of wood and soon replaced with a third Sportsman's Park made of concrete which opened in 1909. In 1920, the Cardinals moved back to Sportsman’s Park, paying rent to the Browns as both teams shared the stadium. The park was expanded and renamed Busch Stadium and was used until 1966, when the Cardinals moved to a new park downtown.

An aerial view of the park 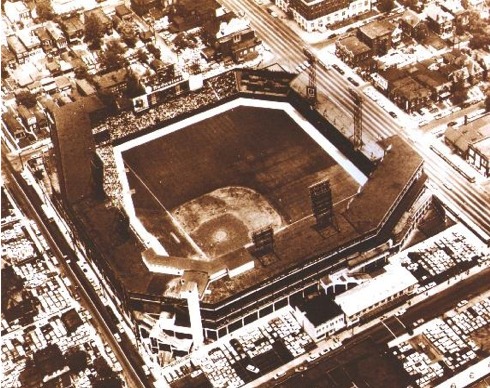 Several ballparks were located here prior to 1909, when the third and final Sportsman's Park was completed. The Browns played at Sportsman's Park from 1909 to 1953. The Cardinals also played here from 1920 to 1966. 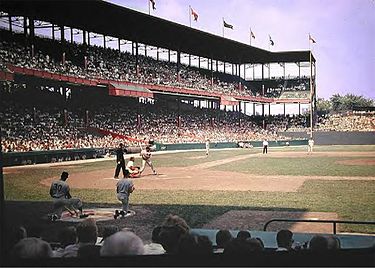 This sign marks the former site of Sportsmans Park. 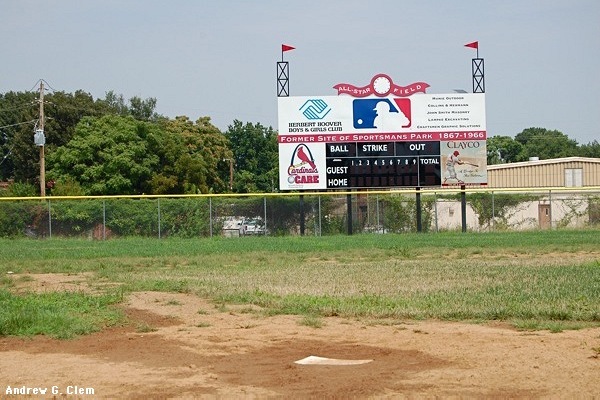 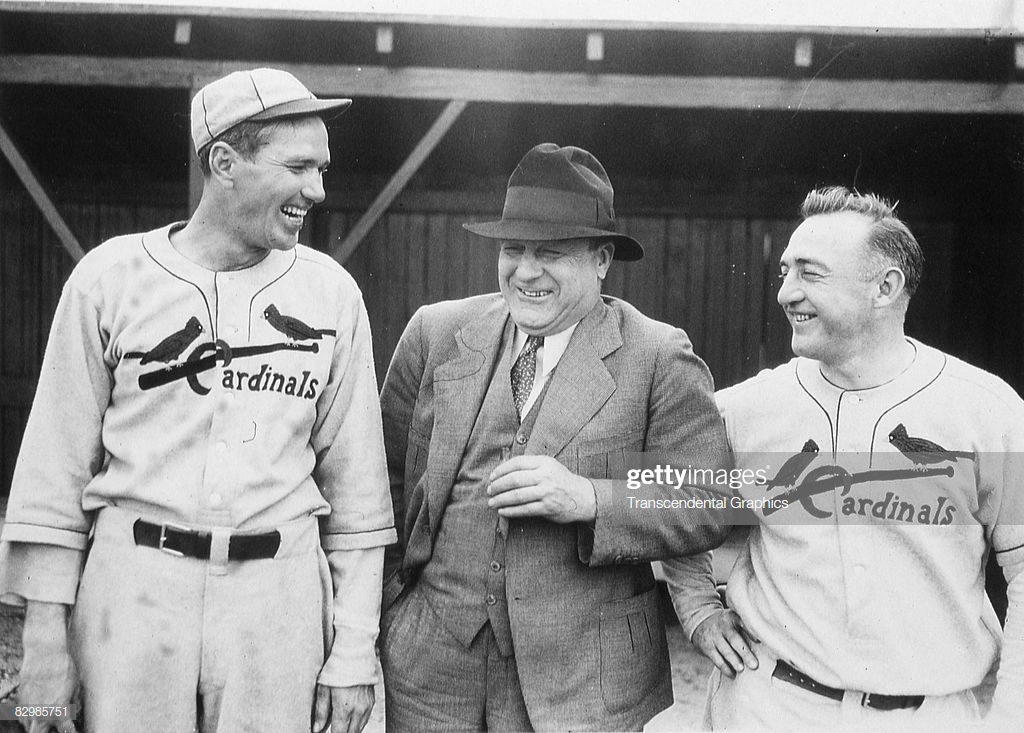 The first wooden stands were built at this location in 1881. In 1892, the team moved a few blocks to the New Sportsman's Park. That new ballpark opened April, 27 1893 with a a game against the Louisville Colonels. This new ballpark was partially destroyed by fire in 1898 and again in 1901. The ballpark was rebuilt each time and renamed League Park in 1899-the same year that the Browns were renamed the Perfectos. The name reflected the creation of a new team in 1900, the St. Louis Cardinals. In 1911, the field was renamed Robinson Field in honor of Frank Robinson who was the former owner of the team. However with new technology in building and architecture the stadiums wood frame was becoming obsolete. The Cardinals played their last game at the original Sportsman's Park in 1920 against the Cubs. The property was sold and a high school was built where old the original Sportsman's Park was built.

Meanwhile at this location, a new stadium built of concrete and steel was was constructed which allowed the creation of double-deck grandstand from first to third base with lower level seating down the line. Along the left field line was the original wooden stands for some years but was eventually replaced with the updated materials. This new park, named Sportsman's Park as the original Sportsman's Park had changed its name to Robinson Field, was only the third to be built with steel and concrete in America. In 1909 the Browns played their first game in the new Sportsman's Park against Cleveland. The Cardinals ended up moving back from Robinson Field to Sportsman's Park in 1920 becoming tenants of the Browns and sharing a stadium with them. After nearly winning a pennant in 1922, Browns owner Phil Ball predicted that they would host a World Series in the coming years so he expanded the seating from 18,000 to somewhere around 30,000. The prediction came true but it was the Cardinals, not the Browns that participated in it and ended up beating the Yankees in an exciting game 7.

The Cardinals became a premier team in St. Louis thanks to coach and general manager Branch Rickey. He was able to change baseball forever by implementing the farm system. Rickey was the first in baseball to purchase minor league teams to develop talent. Prior to the Cardinals and Rickey, teams would have tryouts or acquire players in trades. Rickey discovered players such as Pepper Martin, Joe Medwick and brothers Dizzy and Daffy Dean, along with Hall of Famers Enos Slaughter and Stan Musial. After winning six World Series titles from 1926 to 1946, the Cardinals were perennial contenders into the late 40's and early 50's, After the St. Louis Cardinals were sold to the owner of Anheuser-Busch, August Busch, from Fred Saigh, Busch went on to purchase the stadium itself in 1953 for $800,000. They briefly named the ballpark Budweiser Stadium until it was permanently changed to Busch Stadium. With the Cardinals being the dominant team in St. Louis and with the Browns in their championship shadows, the Browns decided to move their team to Baltimore, Maryland. The Browns became the Baltimore Orioles after the 1953 season.

Recognizing the possibility of increased attendance as the only MLB team in the city, the 54 the Cardinals renovated the stadium completely in preparation for the 1954 season. A new field was put in, new dugouts, clubhouse, seating was updated, and the center field seats were removed and replaced with shrubbery. Also all advertisements were removed with the exception of ads for Budweiser.

After the 1966 season the team moved to a new ballpark and this site was demolished shortly after. A sign commemorating the park stands next to a Boys and Girls Club.