The Boston Fire Museum serves to “preserve and display fire fighting memorabilia from the Greater Boston Area, educate and inform the general public on fire safety, restore and maintain the ‘Landmark’ building [they] occupy and to support the fire service in general” (“History”). The museum displays several old fire fighting machines, fire alarms, photographs, and firefighting equipment. Some of the antique fire fighting machines on display include the American LaFrance Ladder Truck and the Amosleag Steam Pumper. Some of the various fire alarm systems visitors can see include 2 “Gamewell” fire box systems and “marble mounted fire box circuit boards” (“Exhibits”). The photographs on display illuminate the history of fire service in the Boston Area and several items from different engines are on display. The museum also displays several different pieces of fire fighting uniforms and equipment, such as boots, gloves, and coats. 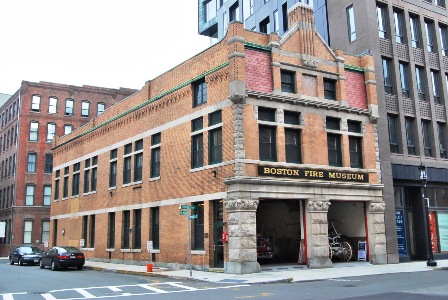 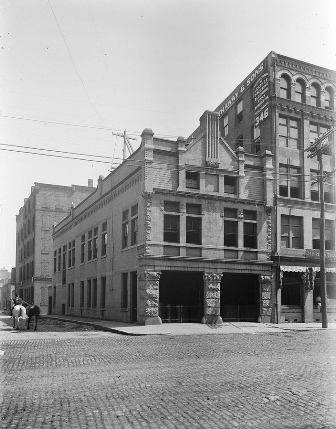 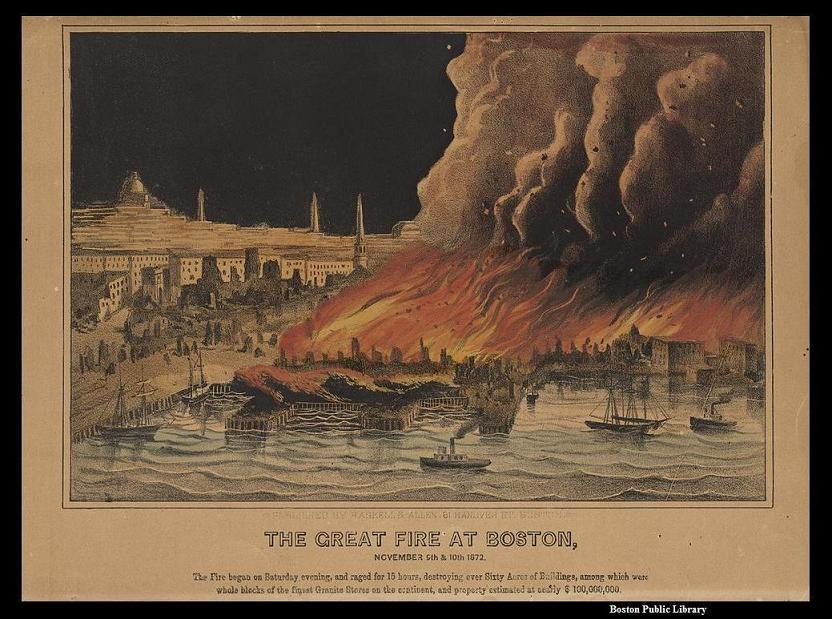 After the 1872 fire (image from Wikimedia) 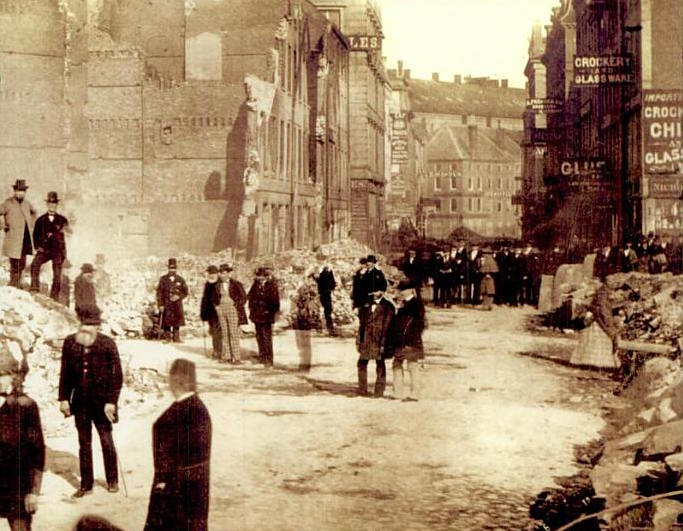 Downtown Boston after the Great Fire of 1872 (image from Wikimedia) 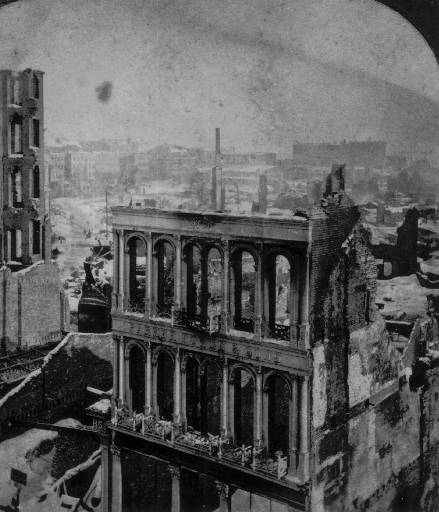 The Boston Sparks Association has operated the Boston Fire Museum since 1983. The museum is located in a former firehouse dating to 1891 and listed on the National Register of Historic Places. The firehouse originally stood on land sold to the city by the Boston Wharf Company, specifically in order to provide protection to the wool warehouse district. Once home to Engine Companies 38 & 39, and later Engine 39 and Ladder 18, the firehouse at 344 Congress Street was designed by city architect Harrison H. Atwood, and operated until 1977. In its history as a station, seven firefighters died in the line of duty, including five who died fighting the Merrimac Street Fire on February 5, 1898. The museum, dedicated as the Arthur Fielder Fire Museum (in honor of the so-called "fire buff" whose collection makes up part of the exhibits) features antique fire apparatus, fire alarms, firefighting equipment, and historic photographs.

A Brief History of the Boston Fire Department

Boston's first fire prevention ordinance was passed in 1631, prohibiting thatched roofs and wooden chimneys. In 1678, the first paid, municipal fire department was created, with Thomas Atkins as chief and twelve firemen under him. A fire engine was imported from England, and housed on town property in a shed on Queen (now Court) Street.

On October 2, 1711, the first Great Boston Fire began at the Ship Tavern (239 Washington Street), destroying the Town House, the first Meeting House, and the homes of 110 families. While attempting to save the church bell, four sailors were crushed to death when the roof fell in. Although the fire department had at least thirteen engines by 1860, on March 20th a second Great Fire of Boston broke out along Washington Street, Long Wharf and Fort Hill, and Congress Street. Nine or ten ships were burned, along with 349 buildings including businesses, homes, and the Quaker Meeting House, leaving 220 families homeless. By 1798, at least 25 fire societies existed in Boston, as well as two fire insurance companies—one of which, the Massachusetts Mutual Fire Insurance Company, included Paul Revere among its incorporators.

The present Boston Fire Department was organized in 1837, and the first municipal fire alarm telegraph system was installed in 1851. Eight years later, hand engines were replaced by steamers, with permanent engineers, drivers, and firemen appointed, ushering in the "modern" fire department. The most famous of Boston's Great Fires occurred in 1872, when 776 buildings were destroyed in a fire which started in a warehouse at Kingston and Summer Streets on November 9. Thirty people (including firemen) were killed as firefighters from all over New England struggled against the spreading blaze, hampered by a shortage of water in the hydrant system, the height of the buildings and narrowness of the streets, and the fact that the Boston fire department's horses had been stricken by an epidemic. Attempts to create fire breaks via explosions only served to spread the fire, which destroyed most of the downtown area by the following morning, at a loss of $75,000,000 in property damages. The destruction prompted city officials to revise fire laws and institute an inspection system.

The 1880s saw improvements and a focus on increased efficiency in the Boston Fire Department, including pensions and relief funds for firemen, sliding poles and bunkrooms in stations, and fire alarm boxes in schools, theaters, and stores. The Thanksgiving Day Fire in 1889 claimed the lives of two firemen, and in 1895 a major fire destroyed 216 buildings, including a fire station, during the Roxbury Conflagration. Horses were retired from the department in 1917, and in 1925 radios were installed in fireboats, chief's cars, and stations.