Formed in 1859, the Richmond Howitzers constituted one of Richmond's most elite antebellum militia units. During the Civil War, the Howitzers three companies served in the Confederate army. Following the war, the Howitzers were reformed and eventually became a unit within the Virginia National Guard. In 1892, the Richmond Howitzers Monument was dedicated to the unit. The dedication ceremonies reveled in the glory of the Howitzers Confederate service, with veterans parading and Confederate flags flying. The dedication's keynote speech by Howitzer veteran Leigh Robinson was infused with Lost Cause ideology; Robinson denied slavery's central role in sparking the Civil War and praised white supremacy as the natural order. In 1989, Virginia Commonwealth University took possession of the monument. In June 2020, following nationwide protests over systemic racism and Confederate iconography, protestors toppled the Howitzer Monument. Other Confederate monuments have come down in Richmond as well. Only the monument's granite pedestal remains.

The Richmond Howitzers Monument, near the VCU campus 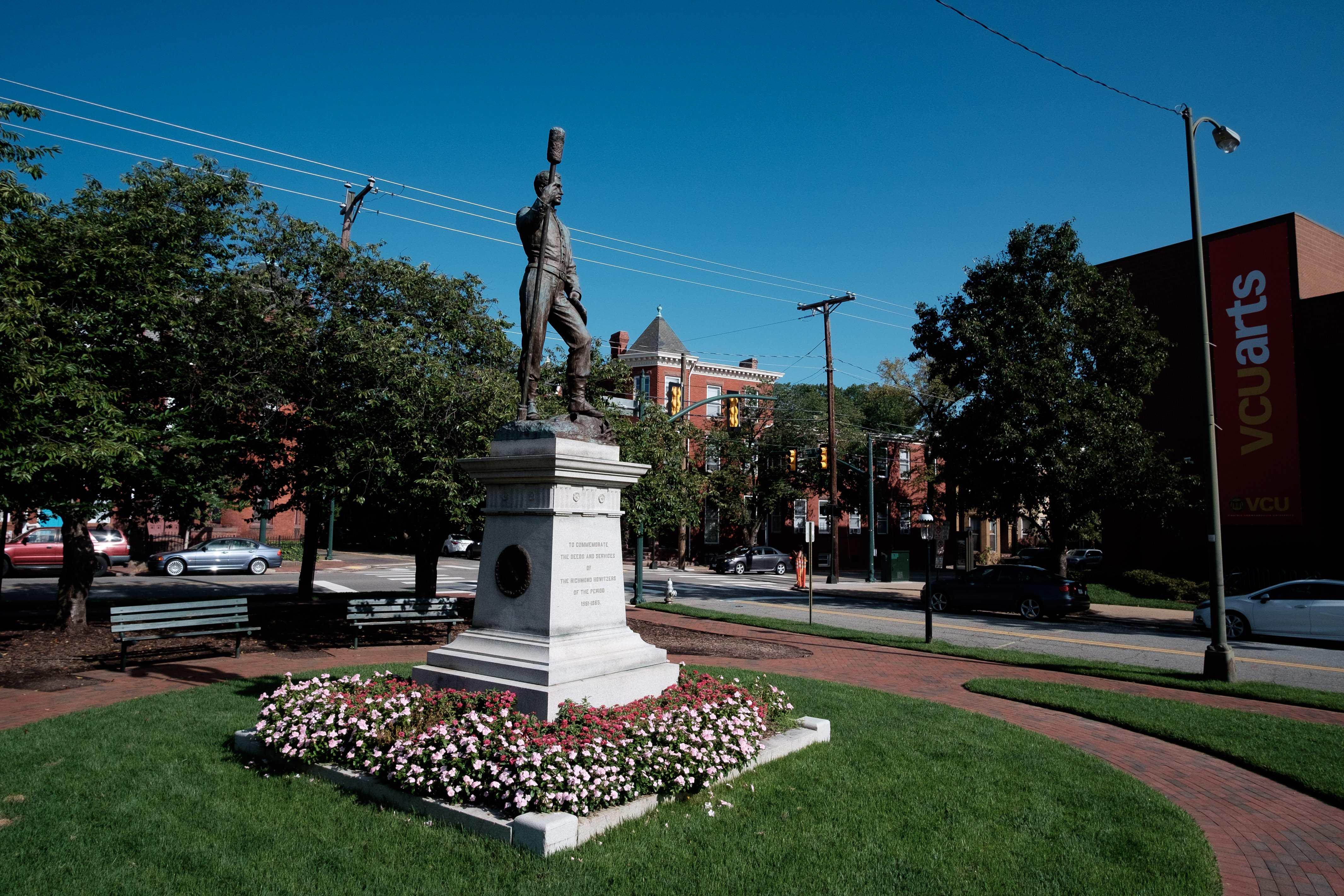 The Howitzers Monument circa 1900 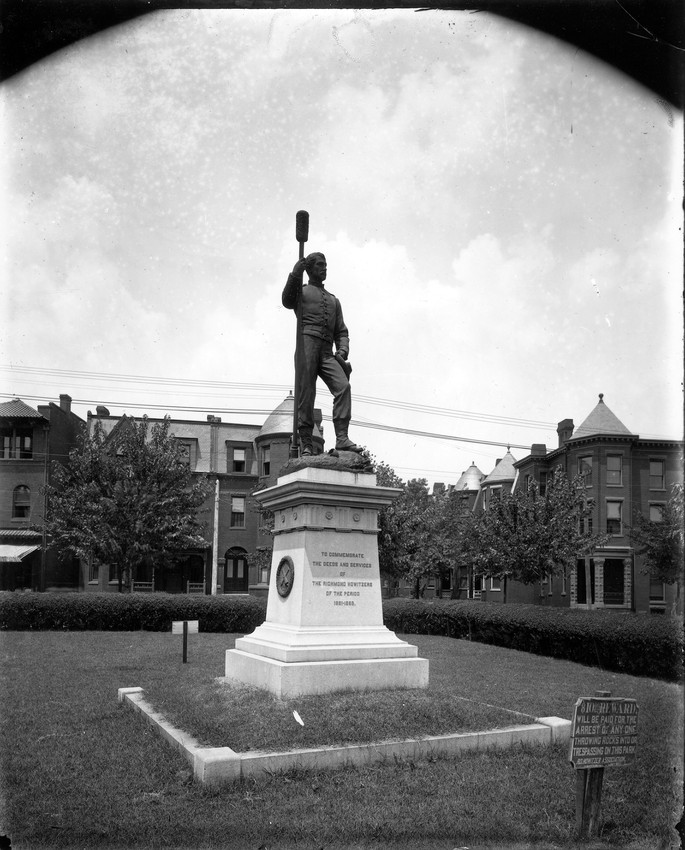 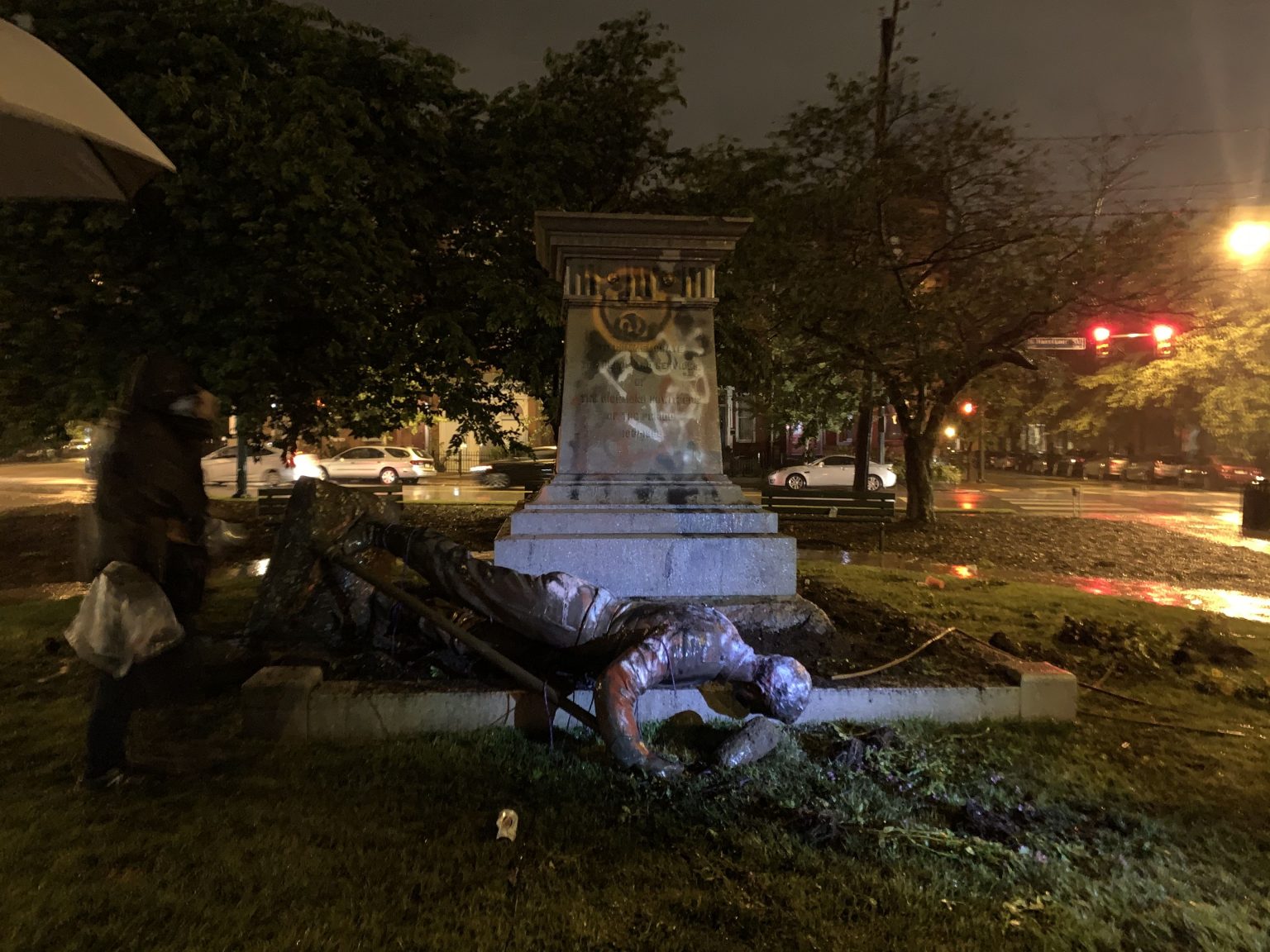 Founded in November 1859, the Richmond Howitzers quickly emerged as an elite Richmond militia artillery company, its members drawn from prominent local families. Prior to the Civil War, the Howitzers provided security during John Brown’s trial in Charles Town. The Howitzers expanded to three companies in 1860. During the Civil War, all three companies were absorbed into Confederate military units and served the major campaigns in the Eastern Theater before surrendering during the Appomattox Campaign. In 1871, the Richmond Howitzers were resurrected as a single militia company, and they were eventually incorporated into the Virginia National Guard. Today, they Richmond Howitzer designation is retained by Battery A, 111th Field Artillery Regiment, Virginia National Guard.

In the 1890s, a movement began to establish a monument to the Howitzers. The statue was designed by William L. Sheppard, a Civil War veteran of the Richmond Howitzers. After the Civil War, Sheppard devoted his time to painting watercolor scenes that depicted everyday scenes of the life of Confederate soldiers. Eventually, he became a well-known artist and crafted several other Confederate monuments.

The monument itself depicts a bronze artilleryman standing erect in the “number one” position at the front of the gun. The "number" refers to the specific functions assigned to a soldier when shooting the enemy, and "number ones" were to ram the cartridge into the barrel of the cannon and to sponge the barrel down after the piece of artillery had been fired in order to put out any sparks before the next round was fired. The bronze sculpture sits atop a granite base at the corner of Park Avenue and Harrison Street. On the south side of the base, we can see the emblem of the Richmond Howitzers on bronze. The Latin expression adopted by the regiment reads “Cita Mors Aut Victoria Laeta”, which translates as “A Quick Death or A Sweet Victory”. On the north side we can see the emblem of the Confederacy on bronze.

The monument’s dedication occurred on December 13, 1892. Like many Confederate monument dedications, it proved a major civic affair. Many citizens, Confederate veterans, veterans of the Howitzers, and contemporary military companies were on hand for the pageantry, which featured a host of speakers, an official unveiling of the statue, and a banquet for Howitzer members. Mr. Leigh Robinson, a Howitzer veteran himself, gave the keynote speech. His address touched on many of the tenets central to Lost Cause ideology. He praised the bravery of Confederate soldier, denied that slavery was the root cause of the Civil War (instead portraying it as a struggle over constitutional liberty), and portrayed the Reconstruction era (in which Blacks had political power) as an era of coercion. He also portrayed slavery as a just institution on the grounds of white supremacy: “Slavery in the South, unlike Oriental bondage, Roman servitude, and feudal villainage, was not the subjection of equals, differing only in opportunity, but the subordination of one extreme of humanity to the other; of the most abject to the most enlightened. The real inequality of the races had made subordination prescriptive.” His speech was met with great applause, and the monument unveiled to an approving crowd as Confederate flags “floated against the winter sky.”[1]

The monument was acquired by Virginia Commonwealth University in 1989 and sat near campus. Students at VCU jokingly referred to the statue as the "Q-Tip Man" and often decorated it with a scarf and hat.

In recent years, the Richmond Howitzer Monument, like other Confederate statues, came under closer scrutiny. In the wake of the violent, white-supremacist Unite the Right rally in Charlottesville in 2017, VCU conducted in audit of Confederate iconography on campus, but the Howitzer Monument drew relatively little attention. VCU needed city approval to relocate or remove the monument.

The Valentine, via Encyclopedia of Virginia: https://www.encyclopediavirginia.org/media_player?mets_filename=evm00002060mets.xml