On a family farm located near the Guyandotte River in Salt Rock, WV, lies two rocks that contain markings known as petroglyphs. These markings hold many cultural messages and meanings for the tribe of Native Americans suspected as the carvers. Once the petroglyphs were found, other archaeological searches were conducted in the area, finding more evidence of a Native culture long gone from society. The petroglyphs are an important part of today’s society for the Salt Rock community who are attempting to preserve the markings, while decoding the messages.

The Salt Rock Pictographs likely date back to the 16th century. They are located on private property and the owner has requested that everyone observe the no trespassing signs around the property. 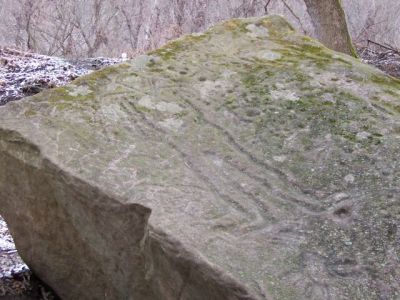 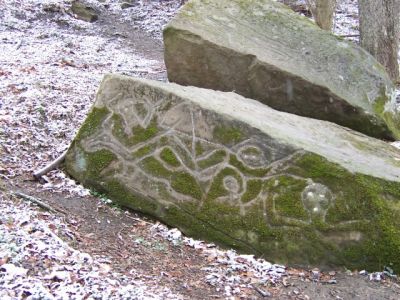 The Salt Rock Petroglyphs are located on Gue Farm about a hundred yards from the east bank of the Guyandotte River; petroglyphs are images created on rock surfaces by removing part of the rock surface by pecking, carving or scraping. History, such markings were used by the carvers as a way to describe the terrain, astronomical markers, trail markers, ritual symbols, and for pre-written language communication.

At least two rocks have been found in Salt Rock with beautiful and well preserved petroglyphs carved on them. One rock contains a carving of a human figure that is wearing a “weeping eye mask.” The weeping eye mask was a common petroglyph motif of the Algonquin Indians from the Ohio Valley region, who are believed to have carved these petroglyphs. The second rock contains an image of a deer and possibly a serpent of some sort. Most petroglyphs found in the United States have been difficult to place an exact date of origin but the Smithsonian in 1938 determined that these types of petroglyphs were carved in 1600 A.D. These rocks would later spawn an archaeological dig on Gue's Farm. As a result, a Native American village would be unearthed as well as a large “weeping eye mask” tying the petroglyphs and village together. Moreover, several other artifacts and even Indian burial mounds have been discovered around the town.

These petroglyphs represent an important part of the local Salt Rock culture and heritage, while also representing a quickly diminishing section of artifacts, as these glyphs are subject to vandalism and weather erosion. The local Native American heritage is important to the area as many movements have been initiated to preserve the glyphs and the burial ground.