Magic Island is a flat five-acre island, actually more of a peninsula connected to the mainland, that includes a walking trail, playground, beach volleyball courts and splash pool, and is conveniently located close to hotels, shopping and dining. The multi-use riverfront park is located at the confluence of the Elk and Kanawha rivers on the West Side of Charleston, West Virginia. 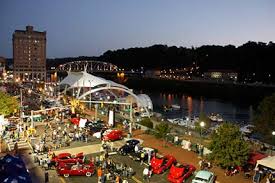 Magic Island at the mouth of Elk River. 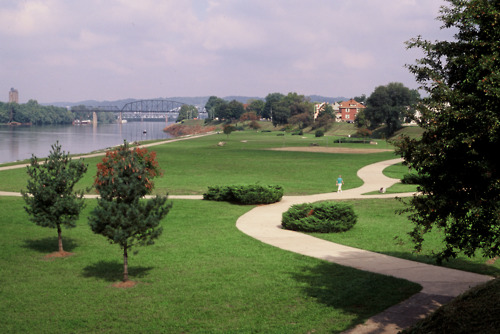 Magic Island Park is located in Charleston, West Virginia. The five-acre park juts out into the Kanawha River below Kanawha Boulevard. It is located on the city’s West Side at the confluence of the Elk and Kanawha Rivers, and formed from deposited silt and debris carried by the Elk River that began accumulating in the late 1940s.

At the beginning, locals were intrigued by the novelty of the newly forming landmass that totaled no bigger than an acre below the mouth of Elk. In 1948, the Charleston Gazette held a naming contest that received over 4,500 entrees. The name "Magic Island" won the competition, so named because of its tendency to disappear during high water and reappear almost like magic during periods of low water.

Who owned the island, how it should be used, and who would pay for upkeep were recurrent themes of newspaper articles and public comment for the next two decades. West Virginia Governor Hulett Smith ended the ownership dispute in 1968 by simply leasing the island to the City of Charleston for 99 years, thus ending the debate without a legal ruling. Over the years, locals variously wanted a bird sanctuary, marina, city park and even the Charleston Civic Center built on the island. Volunteers undertook sporadic cleanup efforts (often using free Boy Scout labor), as well as an attempt to trap silt and debris to build up the island by planting 200 willow trees. Unfortunately, the dense vegetation also trapped river-borne debris and garbage.

In 1970 the Charleston Parks Department made a deal with a contractor erecting the I-64 bridge supports to drop thousands of yards of material dredged from the bottom of the river around Magic Island in return for being allowed to store their machinery on the island for the duration of the bridge project. This increased the area of the island five-fold, but no further substantial work ensued.

Finally, in 1989, additional dredging, filling and leveling occurred to create a prominent peninsula that looked physically much as it does today. This effort was part of a greater plan by the city for revitalizing Kanawha Boulevard that also resulted in the construction of Haddad Riverfront Park at the former city levee in 1993.

In the spring of 2016, the City of Charleston is constructing a splash pool on the island. the city received grant funds from the National Recreation and Park Association and West Virginia American Water to complete the project to better the community.