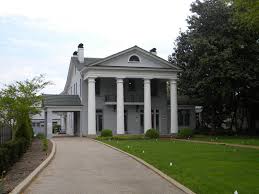 Union Colonel Joseph Lightburn, who commanded Union forces in Charleston in September 1862 when the Macfarland House was damaged by a cannonball. 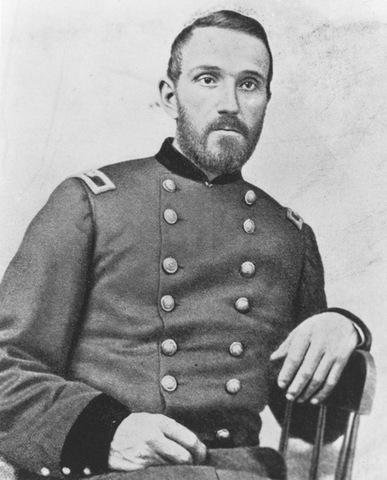 Colonel Lightburn's Union forces retreat from Confederates during the Battle of Charleston, September 1862. Lightburn had his troops cut the cables to on the Elk River suspension bridge to prevent pursuit. West Virginia State Archives. 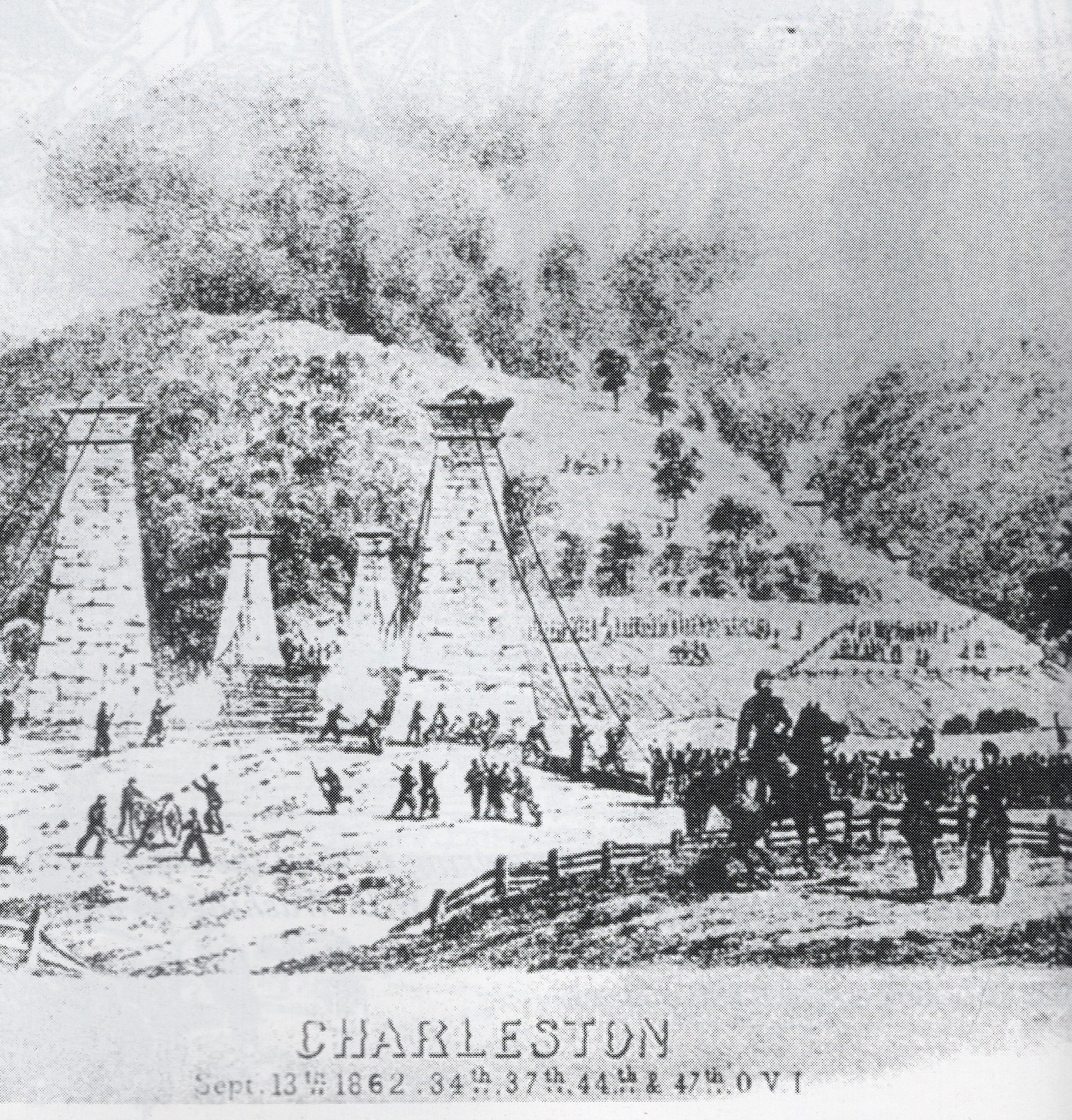 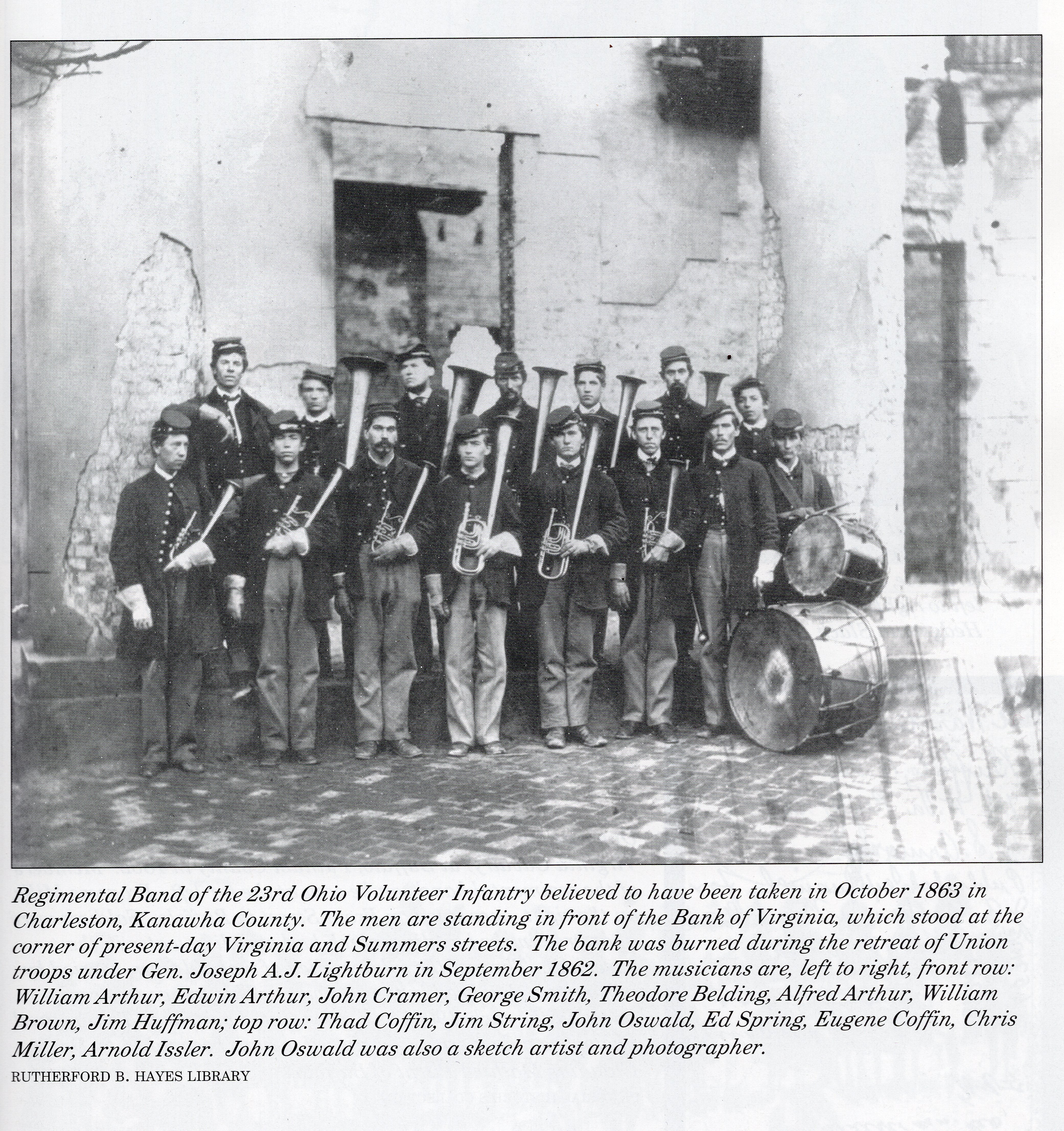 This cannonball, fired by Confederate artillery, struck the house during the Battle of Charleston in 1862. It went through the roof and into the neighboring Rand House. Rand House was demolished in the 20th Century. Photo: Kyle Warmack. 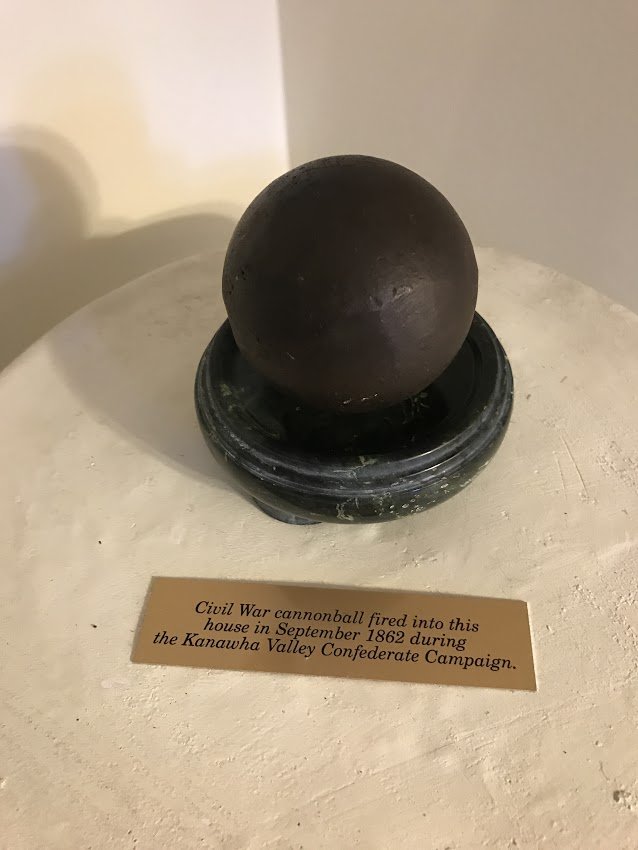 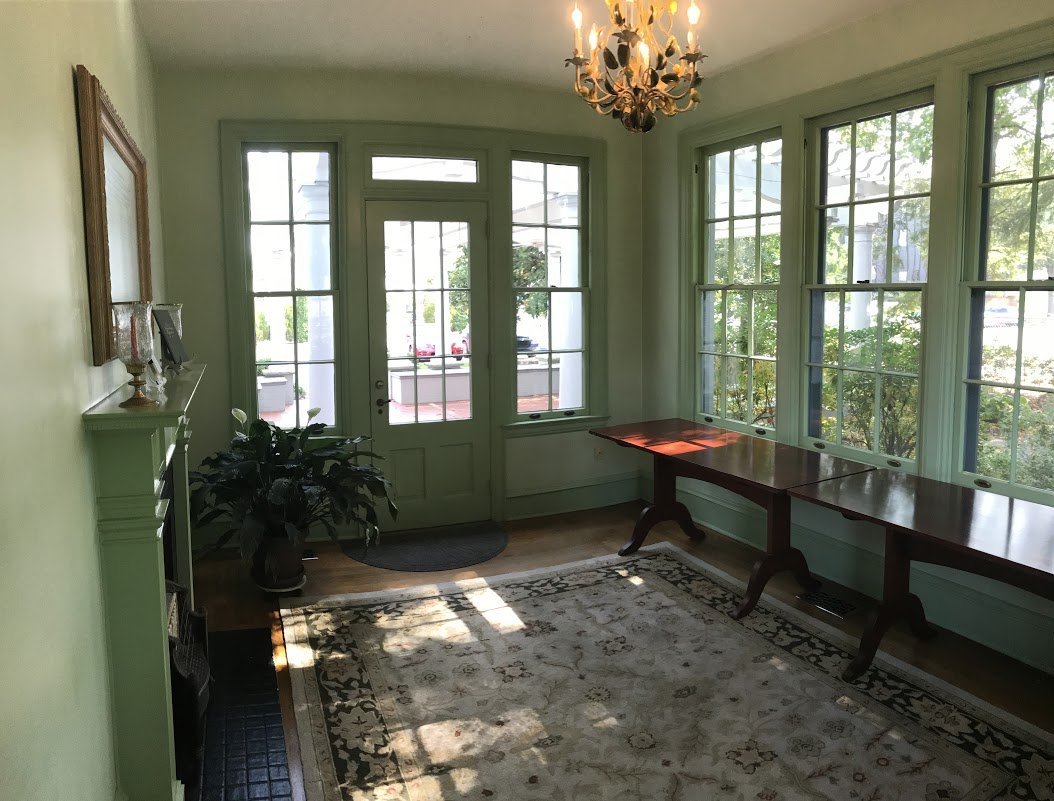 Restoration work in 2000, after the house was purchased by the West Virginia Humanities Council. Photo: WVHumanities.org. 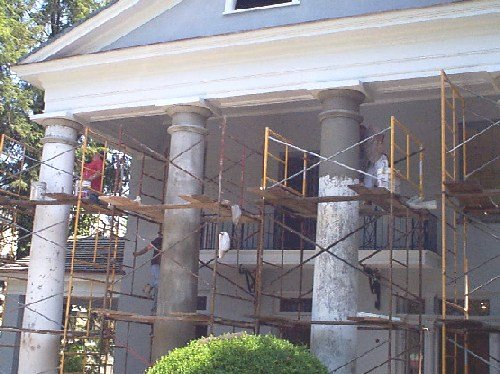 Due to its safe elevation above the temperamental Kanawah River, the property upon which Henry Devol MacFarland's house would be built was deemed suitable in 1831.  William Whitteker selected the site and his brother, Norris Whitteker, was responsible for building the house. The Whittekers were noted builders in the antebellum Kanawha Valley, and constructed many other early homes in Charleston. "If a Whitteker built it, then there was nothing more to be said--it was a good house,"5 and indeed Norris Whitteker may have even manufacturing the bricks for the house with his own hands.6

Though little remains in the historical record of Henry D. MacFarland, his brother James was prominent businessman and banker, largely responsible for establishing a branch of the Bank of Virginia in Charleston in 1832. The branch would later burn down during Union Colonel Lightburn's retreat from Charleston in September 1862, when Confederate forces took the city. The fire also consumed James Macfarland's diary, which he had kept scrupulously for 50 years.

By 1851, the house was occupied by the family of John C. Ruby II, who had married Mary Frances Noyes. Noyes' father, the wealthy Bradford Noyes, had made his fortune in the salt-making business that was Charleston's first great industrial boom. The Ruby family, like many of the Charleston business elite, were Confederate sympathizers at the outbreak of the war, and John C. Ruby II soon joined Colonel George Patton's Kanawha Riflemen (later incorporated into the 22nd Virginia Infantry regiment). The son of the house's previous owner, Henry Devol MacFarland Jr., was also a member of the Kanawha Riflemen.

When Union forces occupied Charleston in April 1862, the Ruby family fled south for the duration of the war. Confederate troops in turn raided Charleston in September, and a cannonball (likely from Confederate artillery firing from the southern bank of the Kanawha River at Federal troops in the city) crashed through the roof of the Macfarland House.The cannonball was passed down from owner to owner and into the hands of the final private owner of the house, Elizabeth Hubbard. It is on display in the lobby of the house.

Ironically their housebuilder, Norris Whitteker, was an ardent Unionist and served as the town's postmaster general for the latter half of the war. Charleston was an important communications hub, and Whitteker is reputed to have posted as many as 40,000 letters in one particularly busy day at the post office.

Members of the Ruby family returned to the house in 1865 when the war came to an end. To their surprise, they discovered their vacant home had been converted into a hospital for Union troops. A number of soldiers were still convalescing within, but promptly moved into tents on the front lawn until healed enough to return home.

The Ruby family continued to gain prominence in Charleston after the war. John C. Ruby II, who returned to his family after his service in the Confederate army, would be twice elected mayor of Charleston. Sons Bradford and John C. Ruby III, forming a grocery and real-estate firm under the name Ruby Bros., opened the first wholesale grocery store in the city in 1872.

The house was passed through Ruby family members until it was purchased by John B. Crowley in 1922. A businessman like all the house's previous owners, Crowley underwrote the construction of the Hotel Kanawha, Holley Hotel, and the Capitol Theater. Though Crowley owned the house for a shorter period than any other family, he made significant remodels during his occupancy. A sunroom and porte cochere were added during his tenure, and a front balcony replaced an original gallery.

J.W. Hubbard, a grocer like the Ruby brothers before him, purchased the MacFarland-Hubbard House in 1945. It was passed down to his daughter, Elizabeth Hubbard, upon his death. Elizabeth was to be the house's last residential occupant.

The West Virginia Humanities Council purchased the home from the First Presbyterian Church in 1999 and immediately began preservation efforts, taking care that all construction complied with the U.S. Secretary of the Interior’s Standards for Historic Preservation. The structure’s stabilization was the first priority, followed by the installation of modern heating and cooling. The historic restoration on the first floor created space for exhibits, programs, and meetings. The second floor of the MacFarland-Hubbard House currently hosts the offices for the West Virginia Humanities Council.

The restoration efforts were made possible with the support of the Preservation Alliance of West Virginia and the Kanawha County Historical and Preservation Society.

Visitors to the house wishing to tour the interior should use the "Business Entrance" at the rear, where West Virginia Humanities staff members are happy to provide information.