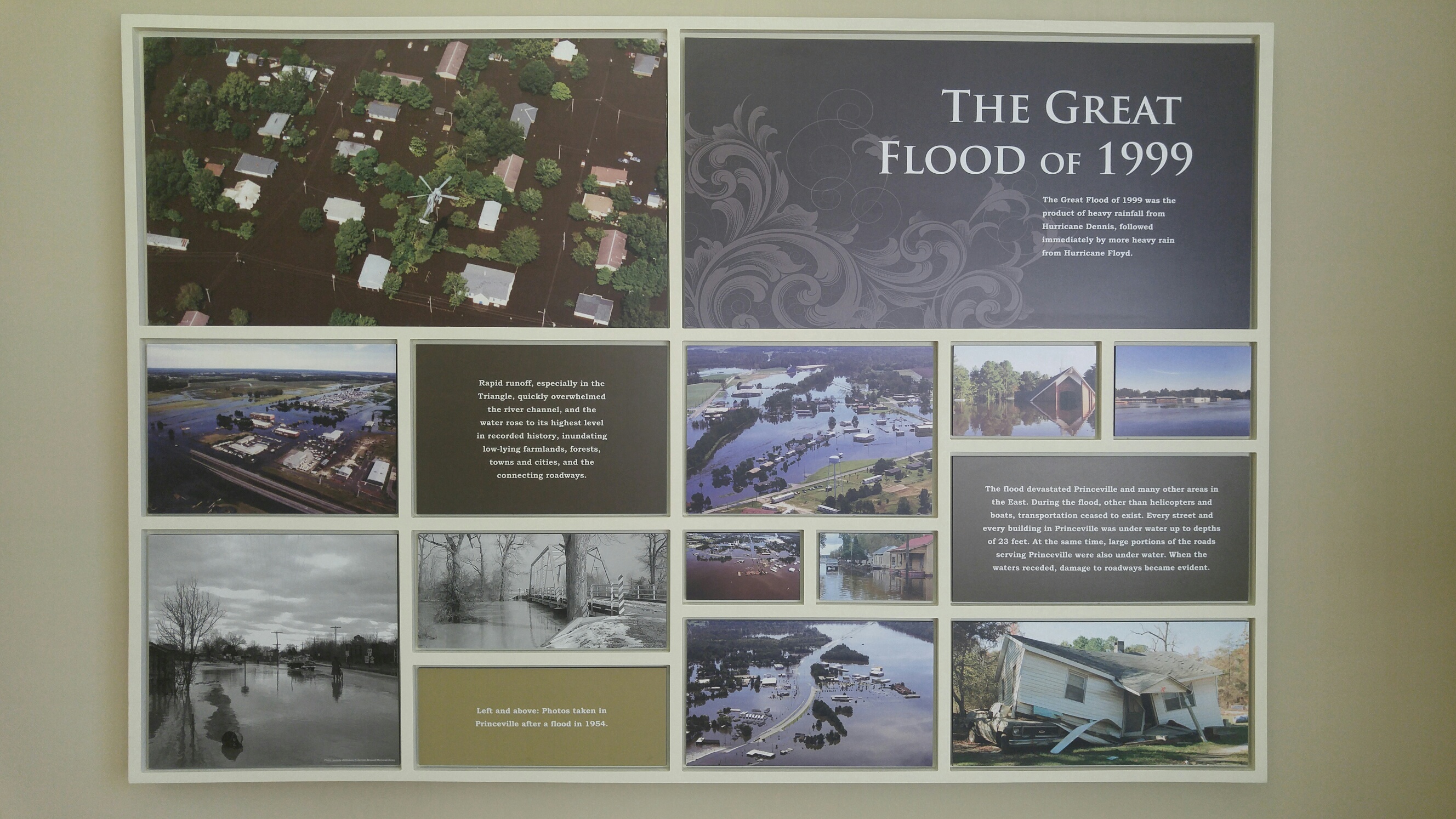 Much of the African-American work force employed in Tarboro lived in Princeville and cross over the bridge twice daily. (photo by: Kayla Greene) 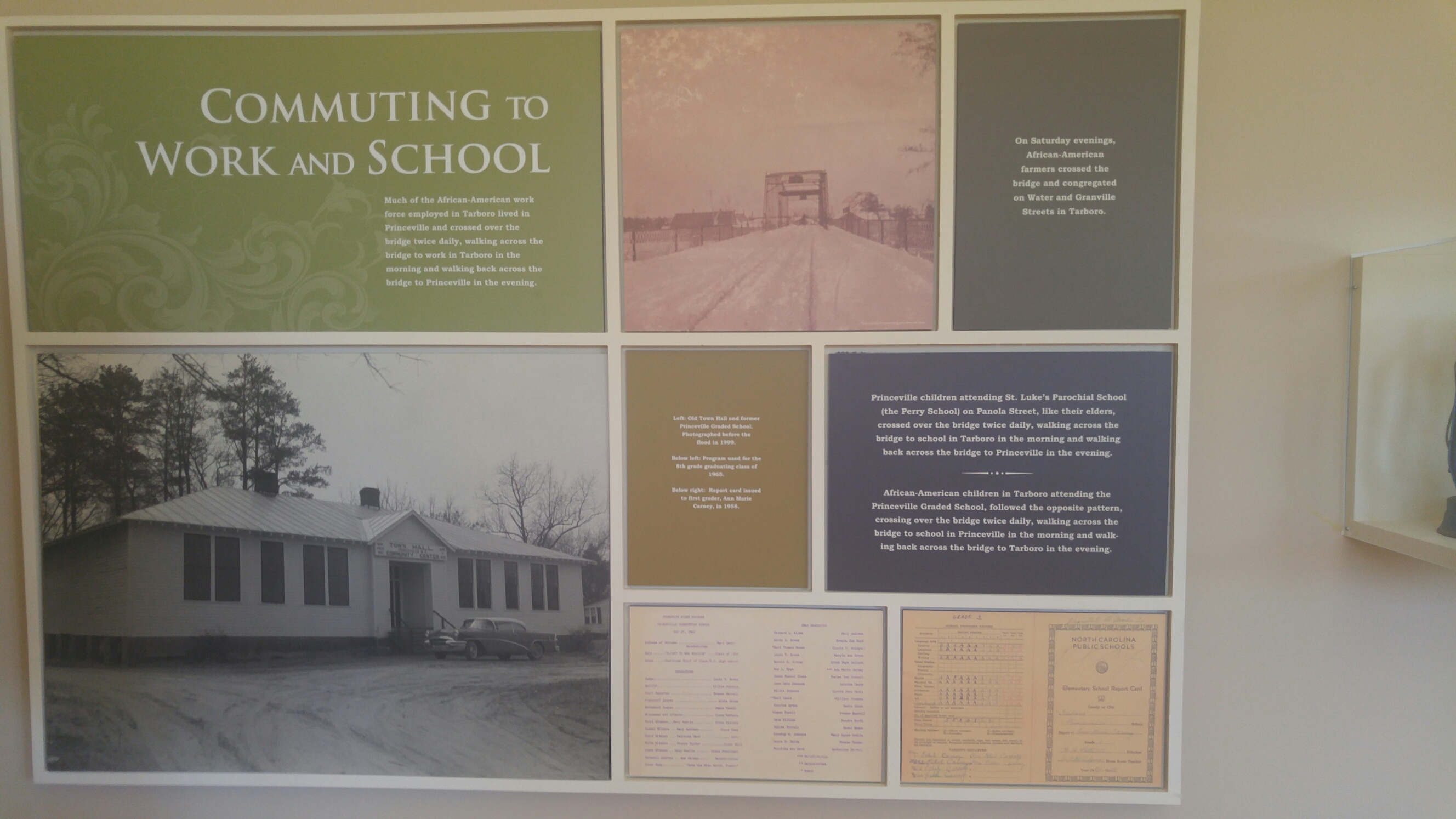 A little display board that the museum has in the backroom of pictures during the hurricane Floyd flood. (photo by: Kayla Greene) 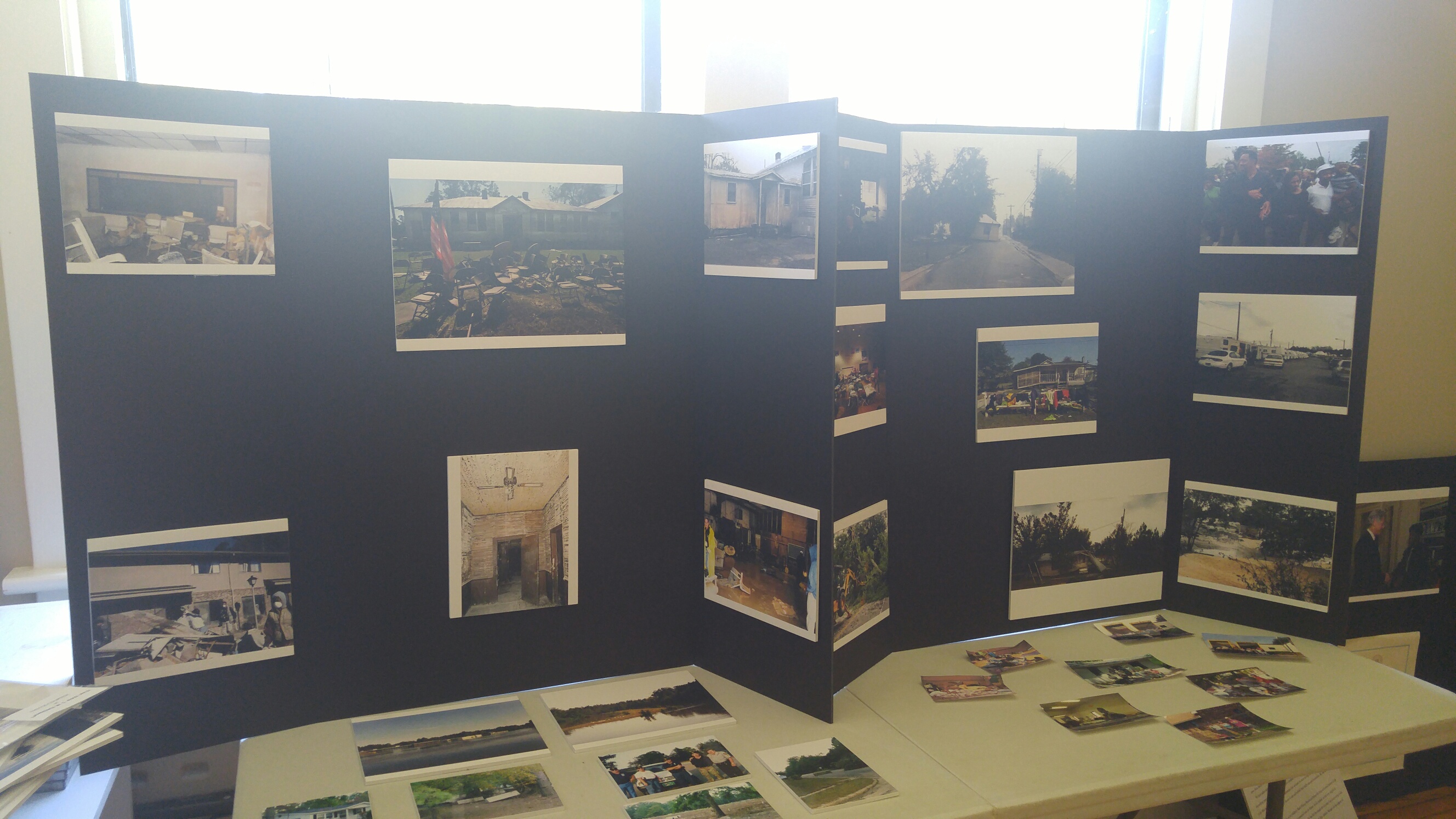 The former Princeville Town Hall as it looked weeks after Hurricane Floyd. This is now the museum. (photo by: Kayla Greene) 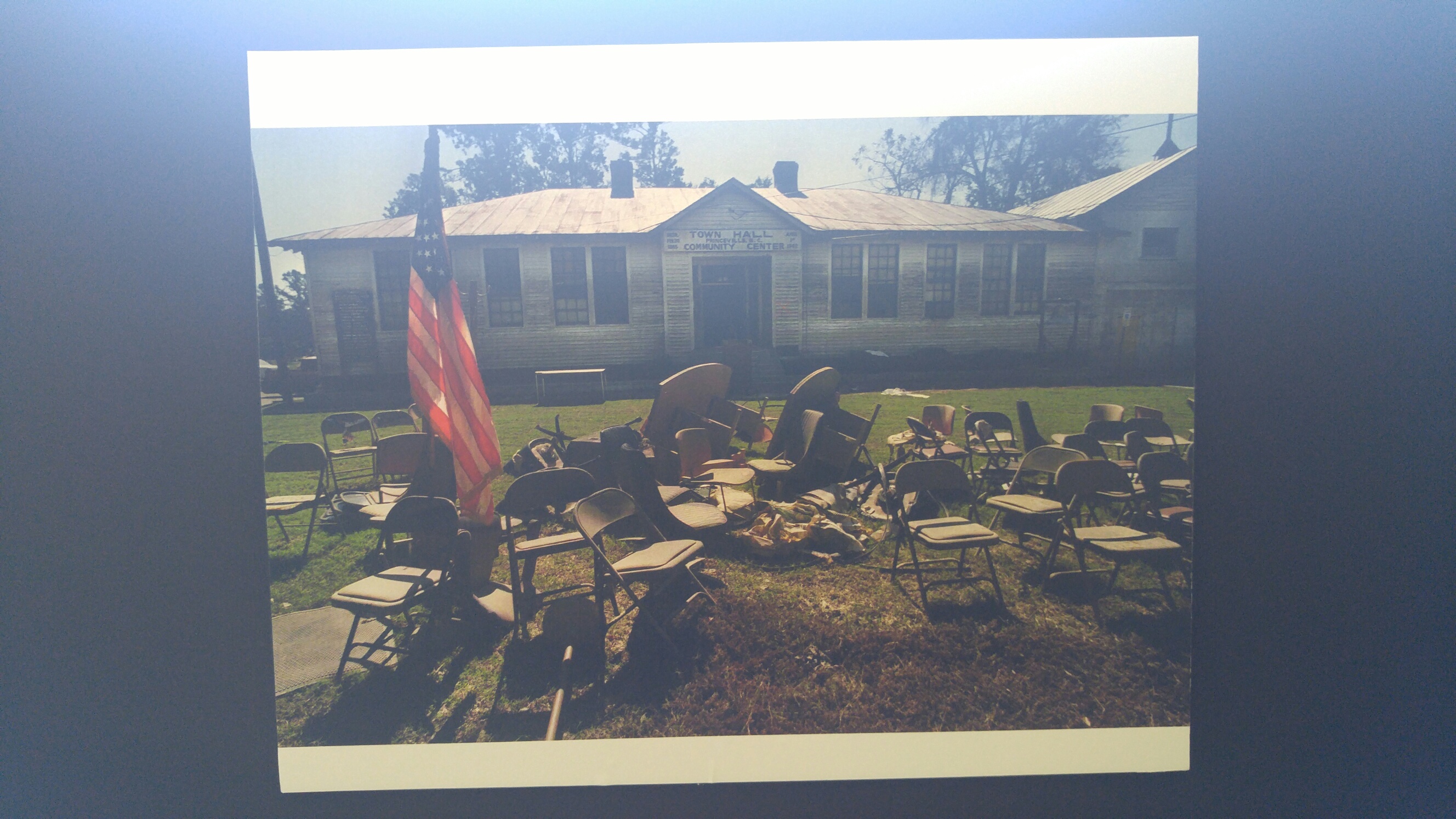 Princeville Museum and Welcome Center. How it looks today in 2016. (Photo by: Jacqueline Murphy.) 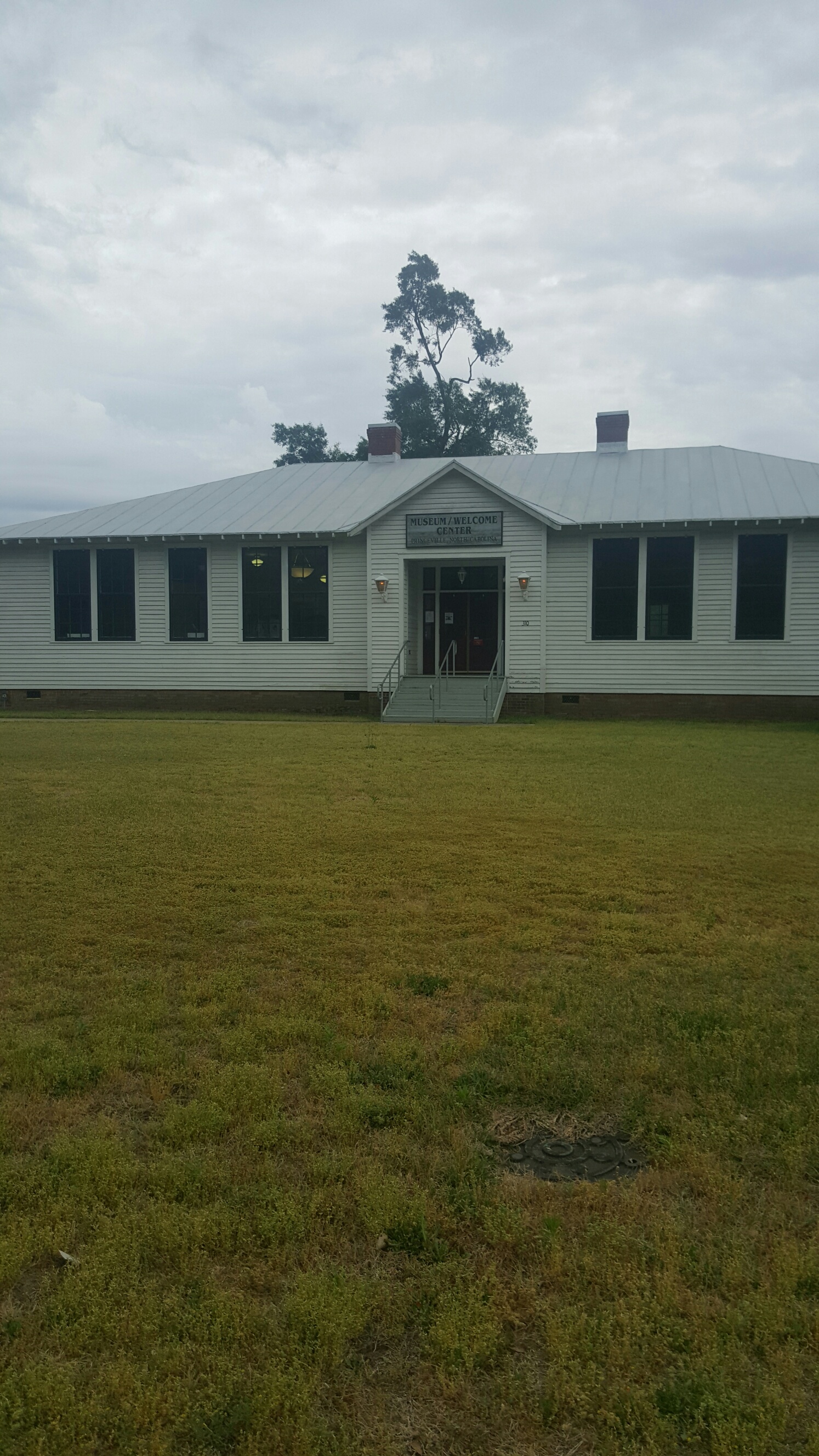 Without a town or county water supply, residents often got water from a well. Water pumps were used to pump the water from underground and pours out through the spout. This is an example of historic artifact (Photo by: Kayla G.) 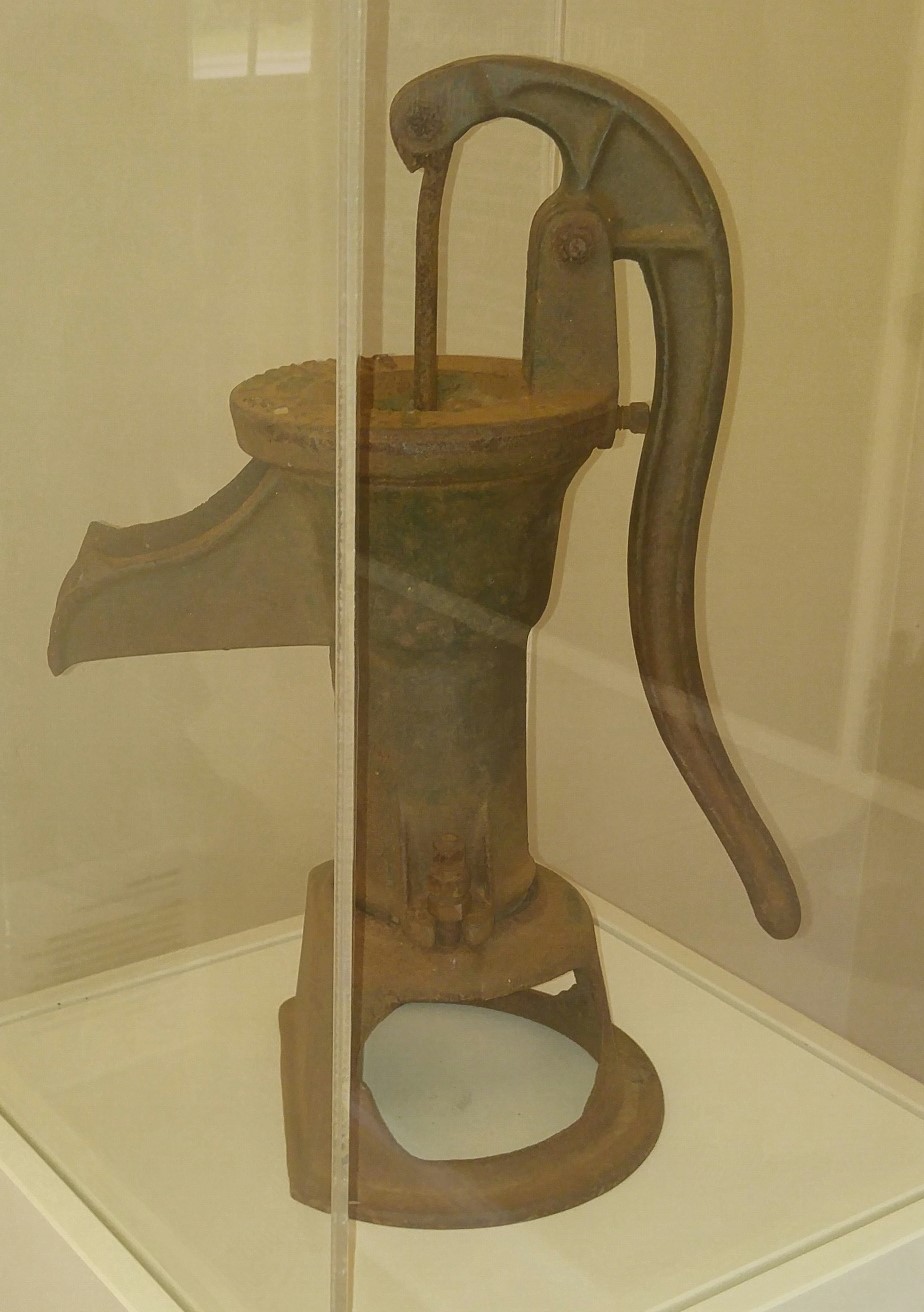 The state marker of Princeville that was formally known as Freedom Hill. On the 1880 Federal Census it was called Liberty Hill. 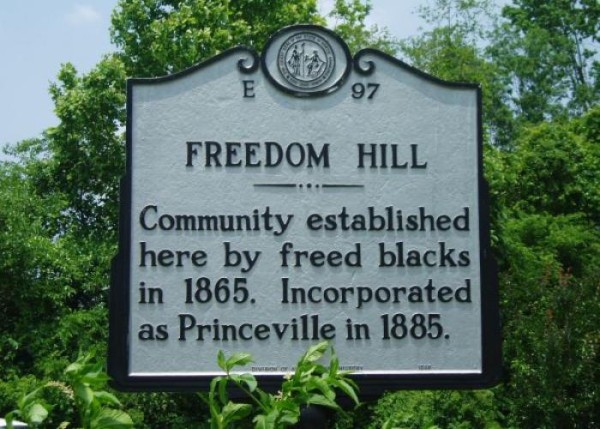 Before electricity and running water came to Princeville, clothes were typically washed with a washboard. (photo by: Kayla Greene) 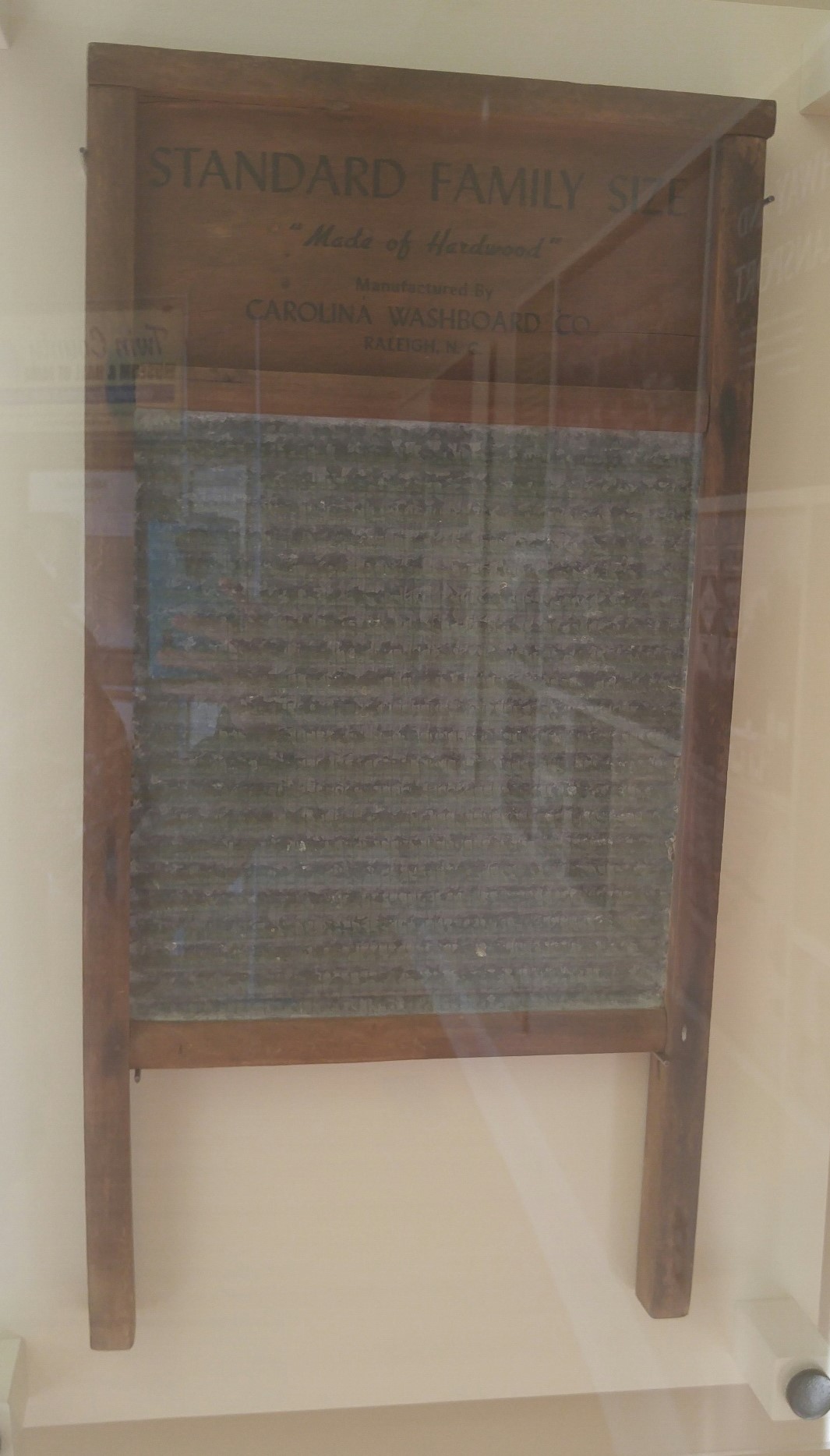 Princeville as a community came into being toward the end of the Civil War when former slaves moved to an area where the union army was camped. (photo by: Kayla Greene) 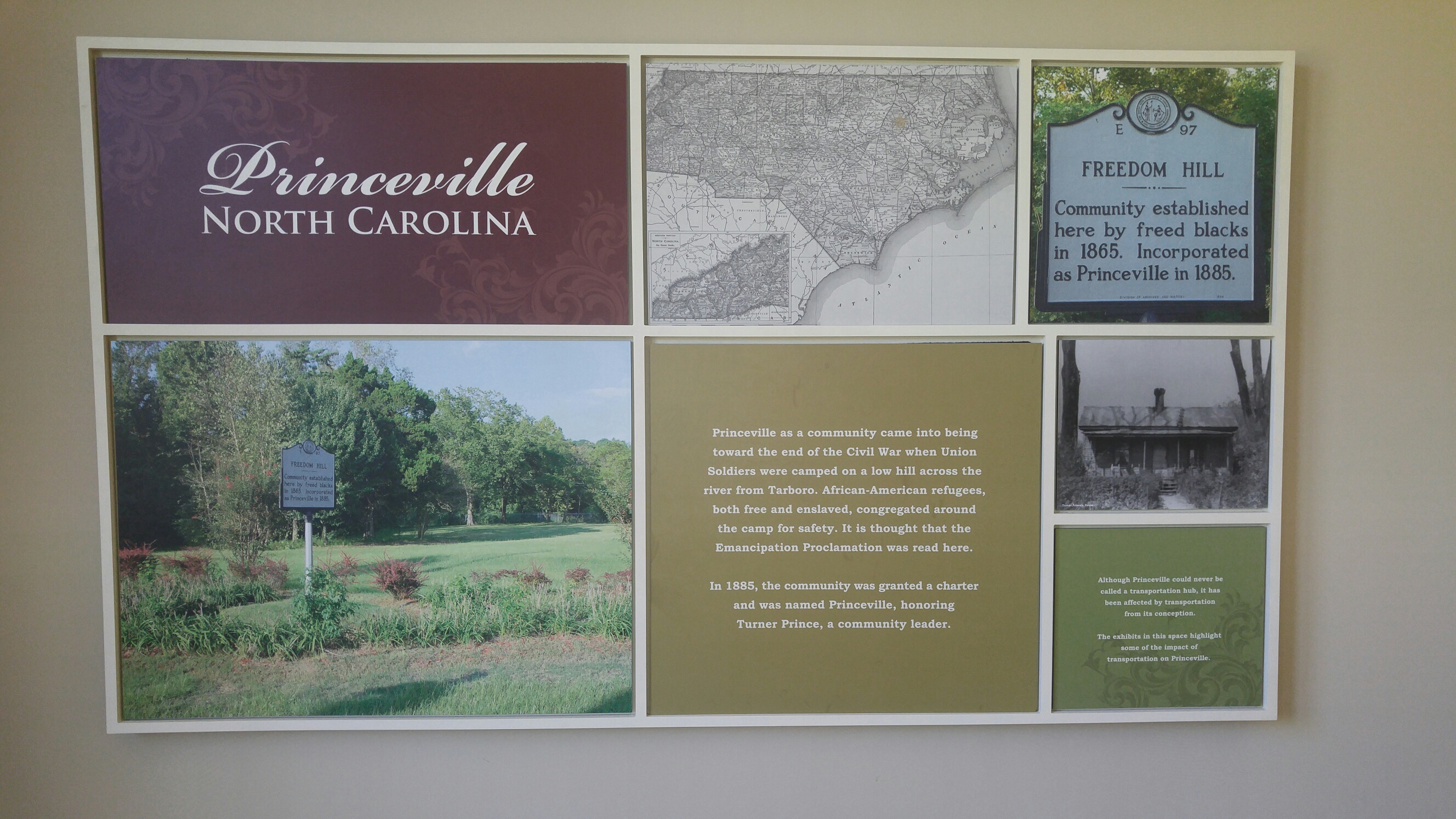 The Colonial Road was complemented with bridges that crossed the Tar River, connecting the road with the Town of Tarboro. (photo by: Kayla Greene) 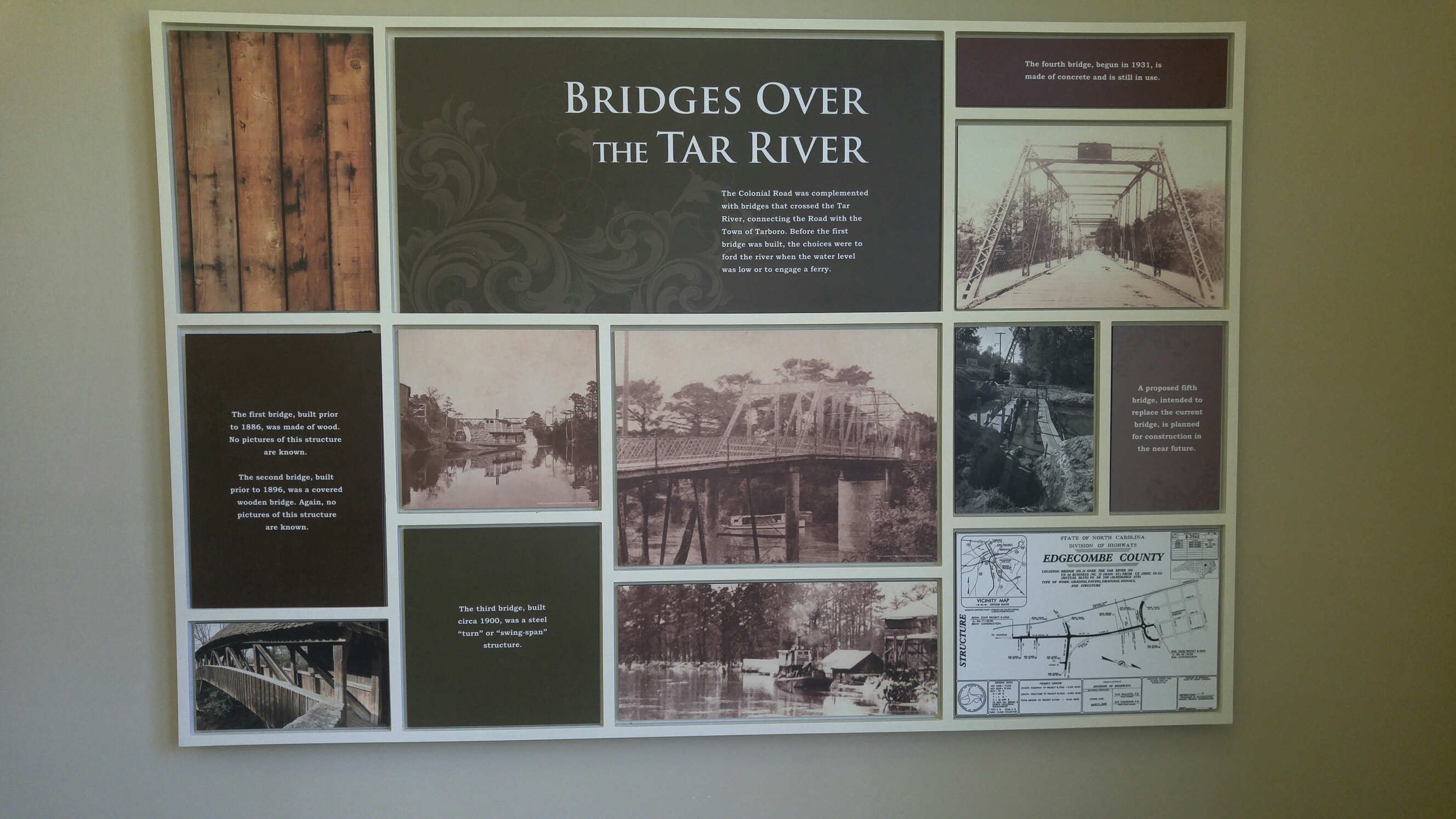 Freight trains have passed through Princeville frequently for a century and a half. (photo by: Kayla Greene) 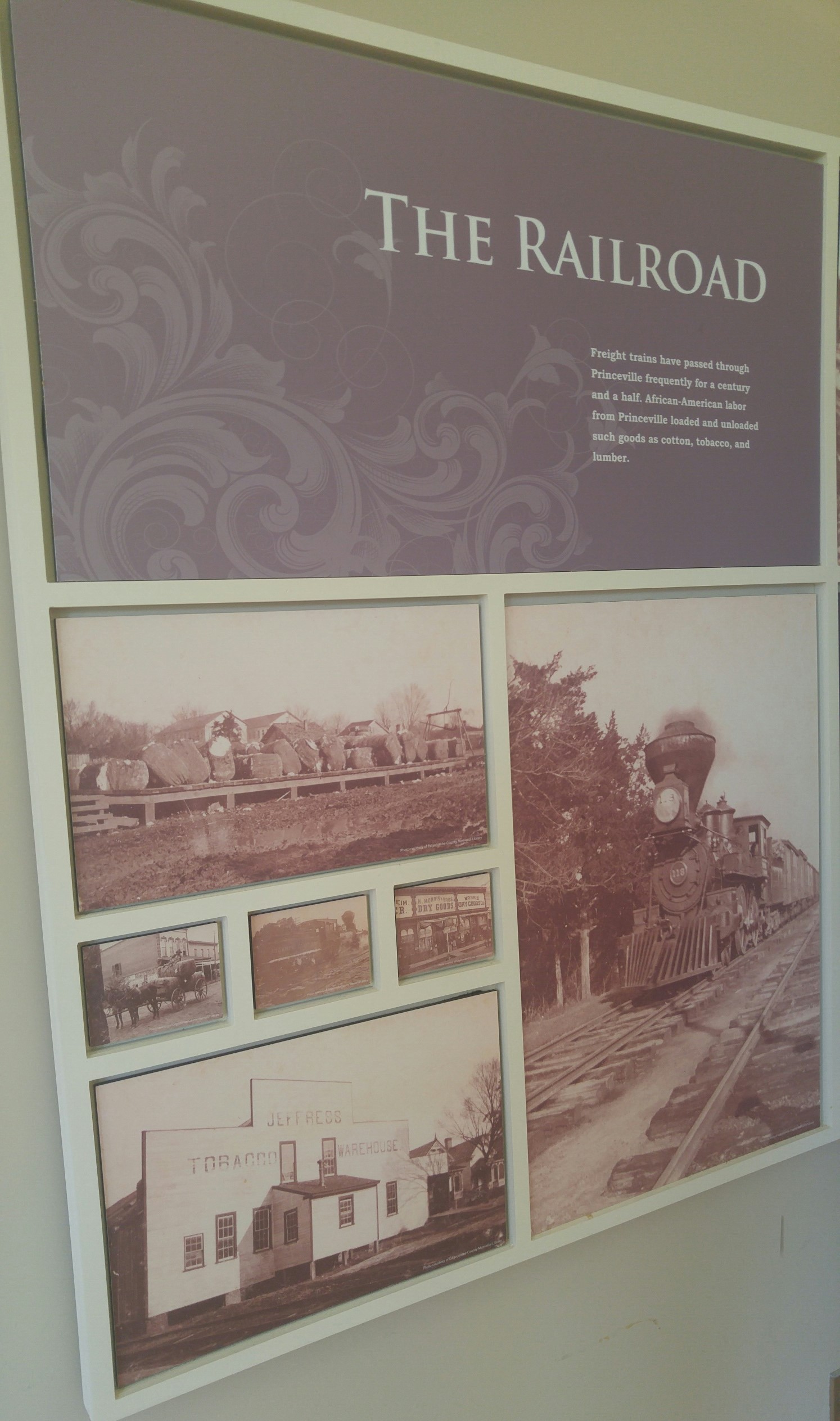 This painting, recalling how the flood divided the town, is on loan from Mrs. Delia Perkins that is in the main hall in the Princeville Museum. (photo by: Kayla Greene) 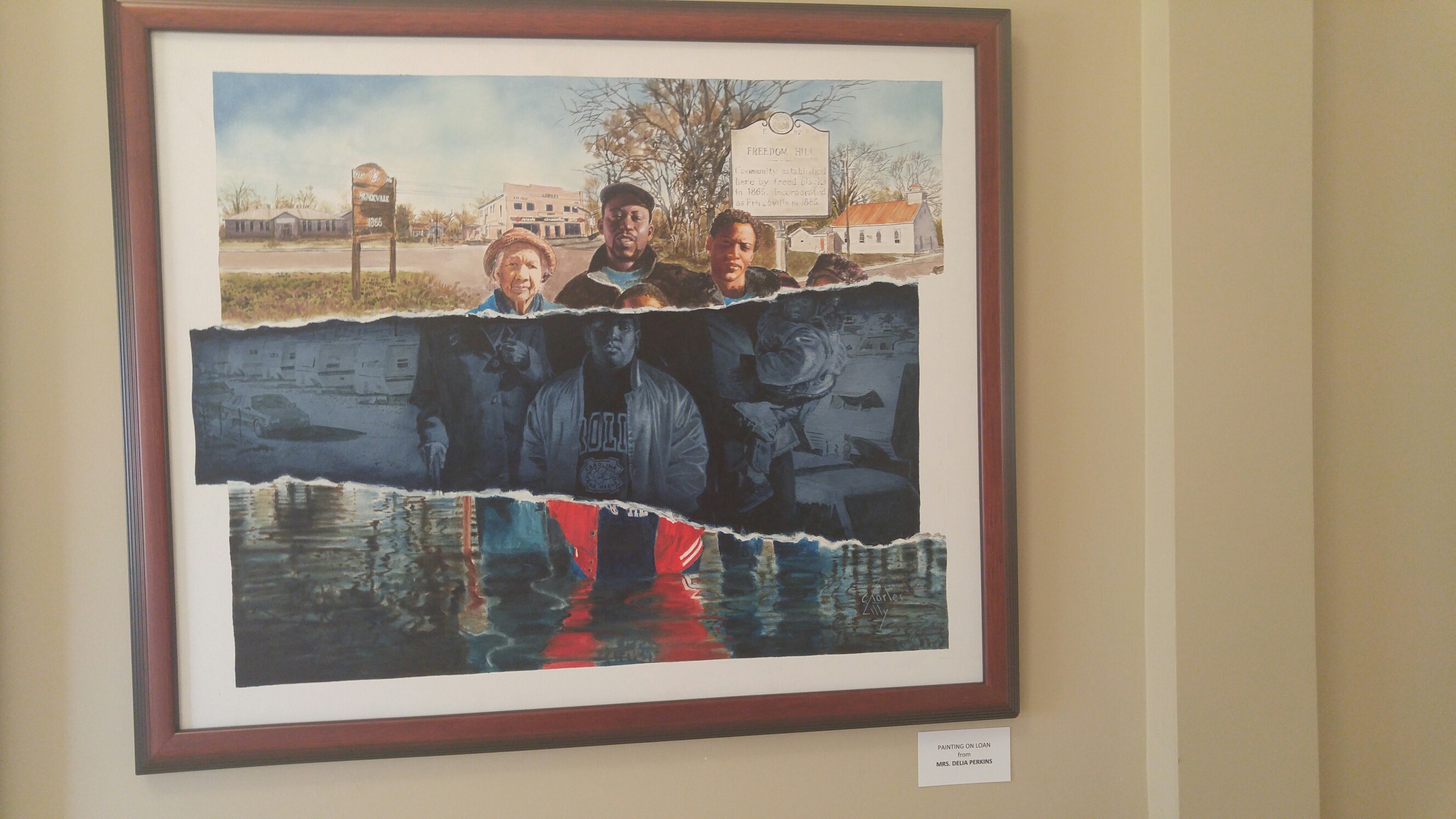 HISTORY OF THE BUILDING

The current building was built in the late 1930s on the original site of a school that dated back to the late 1800s. Originally the school was only for elementary students, but with the new building, high school classes including vocational programs were available. Although it is not one of the 15 Rosenwald schools in the county, it is modeled after the Rosenwald school design.  With the new structure the name changed from Princeville Colored Grade School to just Princeville School. The new school consisted of two classrooms but over the years, additions have been made. This building was a one story weather boarded building, it was eleven bays wide and two rooms deep, with a recessed front-gable entrance. The school's high foundation, supported by brick piers with later concrete block infill, was no doubt due to periodic flooding from the Tar River that has historically affected Princeville. The building received many additions throughout the years such as windows, small front-gable rear extension (probably for bathrooms), and a shed porch. When the Princeville school closed in the 1960s, the building then served as Princeville's town hall until the flood in 1999. The building was heavily damaged as the flood destroyed much of the town, but it was renovated and now is a museum with displays about education, community history, and flood history.

The town of Princeville sits adjacent to the Tar River and due to elevation has flooded many times over the years. Between the years of 1800 and 1958, the Tar River flooded the area seven times. In September 1999, heavy rains from Hurricane Floyd flooded the area once again, but this time, the town was submerged. In some areas of Princeville, water rose twenty-three feet above the streets and it took ten days for the waters to completely recede. Princeville was declared a National Disaster Area and many buildings and homes were destroyed. Princeville's town hall was badly damaged by the recent flood and past floods also destroyed many other older structures. The Flood of 99 was considered one of the worst natural disasters in the state's history with flood waters over 40% of the state and in places like Princeville, the flood almost destroyed the town.  In the early 2000s, the community once again rebuilt and the former town hall is now the town's African American Cultural Museum and Welcome Center.

The African American Cultural Museum offers information on the history of Princeville, North Carolina. They offer brochures, handouts on the founder of the town and when the town was incorporated. The museum also offers information on Hurricane Floyd with images of the destruction. Classes or seminars are held to inform the public on Black history. The museum contains a gift shop that offer educational DVDs, CDs, Princeville t-shirts, pins, and a lot more. The museum also displays paintings from local artists, rents out the building for Government use and different community activities.