Mount Vernon, located in Fairfax County, Virginia, was the plantation home of George Washington, the first President of the United States. This scenic property alongside the Potomac River was first owned by Washington’s great-grandfather in 1674, who transformed the land into a successful tobacco plantation using slave labor and indentured servants. George Washington came into possession of the estate in 1754, when he was about 23 years old, but he didn’t become the property’s sole owner until 1761. The estate served as the centerpiece of Washington’s military and political life, and the site stands as a powerful symbol regarding the birth of the American nation. In 1858, the deteriorating mansion at Mount Vernon and a portion of the original land was purchased by the Mount Vernon Ladies Association, with the intention of restoring the estate to its original grandeur. Now a non-profit organization, the Mount Vernon Ladies Association continues to maintain and operate the estate. Today, George Washington’s Mount Vernon estate is one of the most popular historic sites in the country. By visiting the mansion, gardens, outbuildings, memorials, and museum, visitors can enrich their understanding of the Washington family, the Revolutionary War, and the early Republic. Mount Vernon is both a National Historic Landmark and listed on the National Register of Historic Places.

Mount Vernon's mansion was first built by George Washington's father. When George acquired it in 1754, he expanded upon it until his death in 1799. It is nearly 11,000 square feet and has 21 rooms, and its preservation is an ongoing effort. 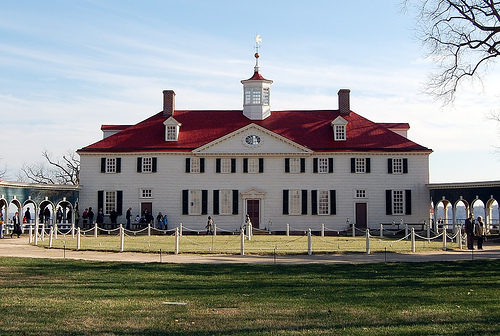 Washington experimented with different planting and animal husbandry techniques at Mount Vernon. Visitors can see a number of animals that are recognizable on today's farms. Photo courtesy of Laura Maple 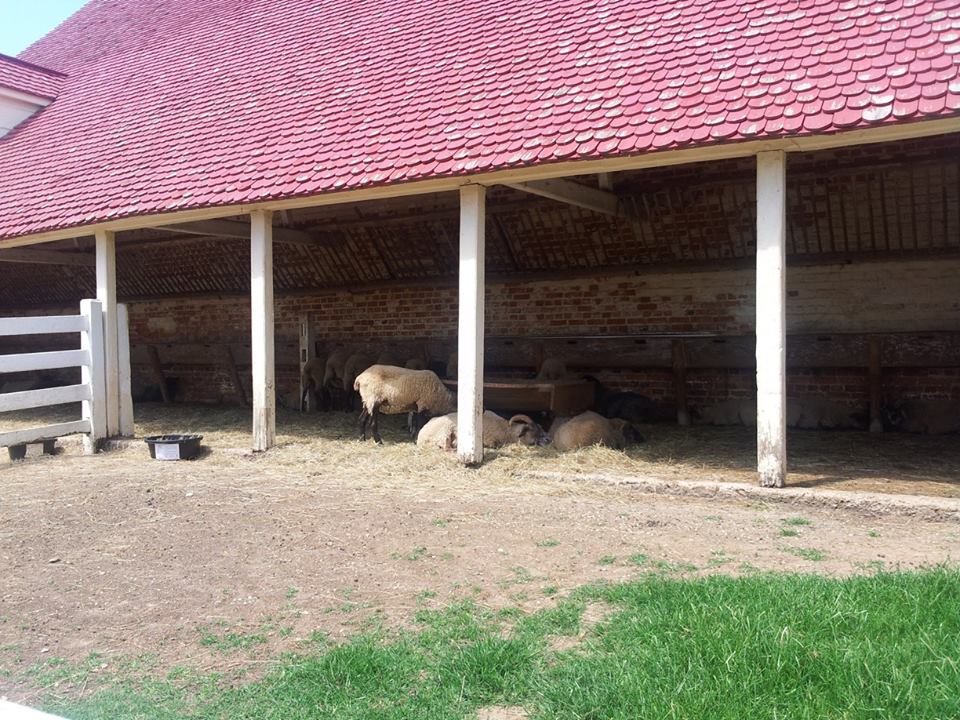 The outbuildings, both original and reconstructed, interpret a variety of trades and activities that sustained the busy plantation, including blacksmithing, preparing food, composting, spinning, weaving, and gardening. Photo courtesy of Laura Maple 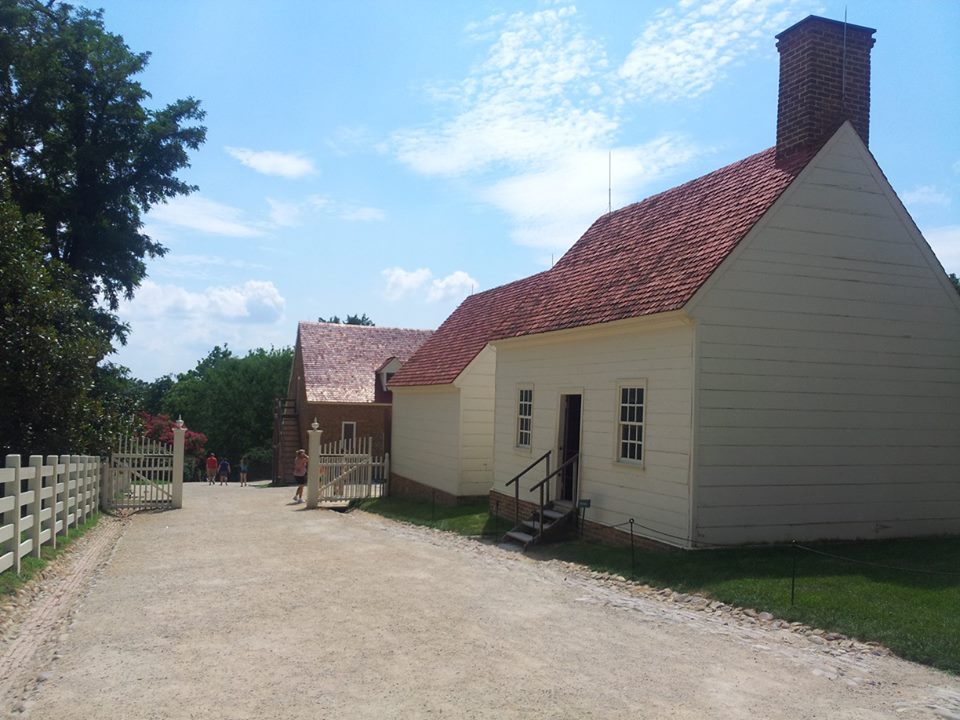 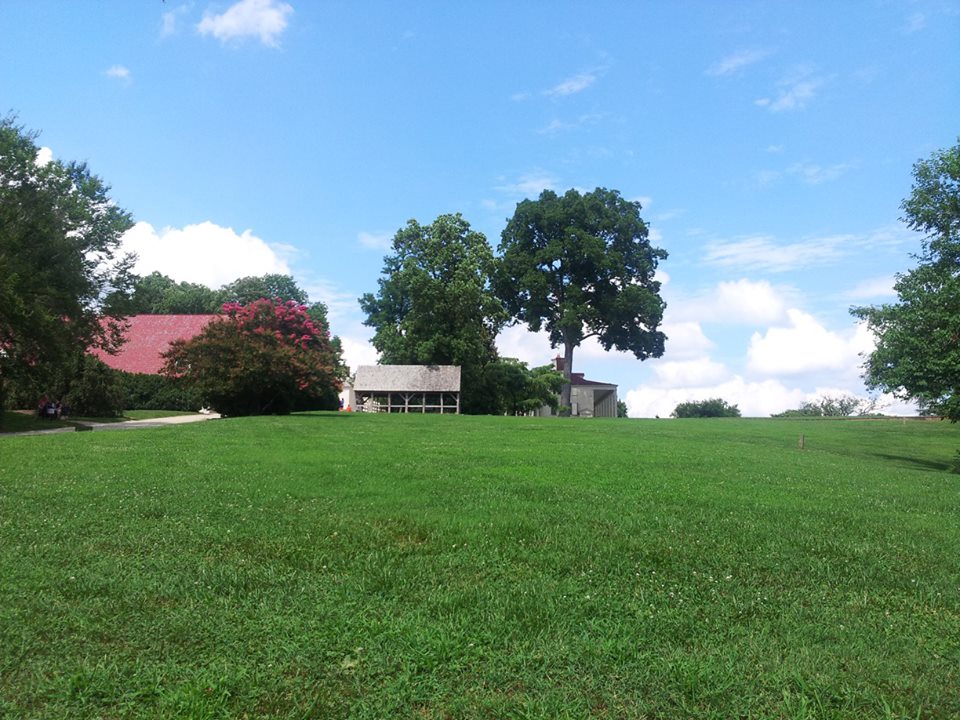 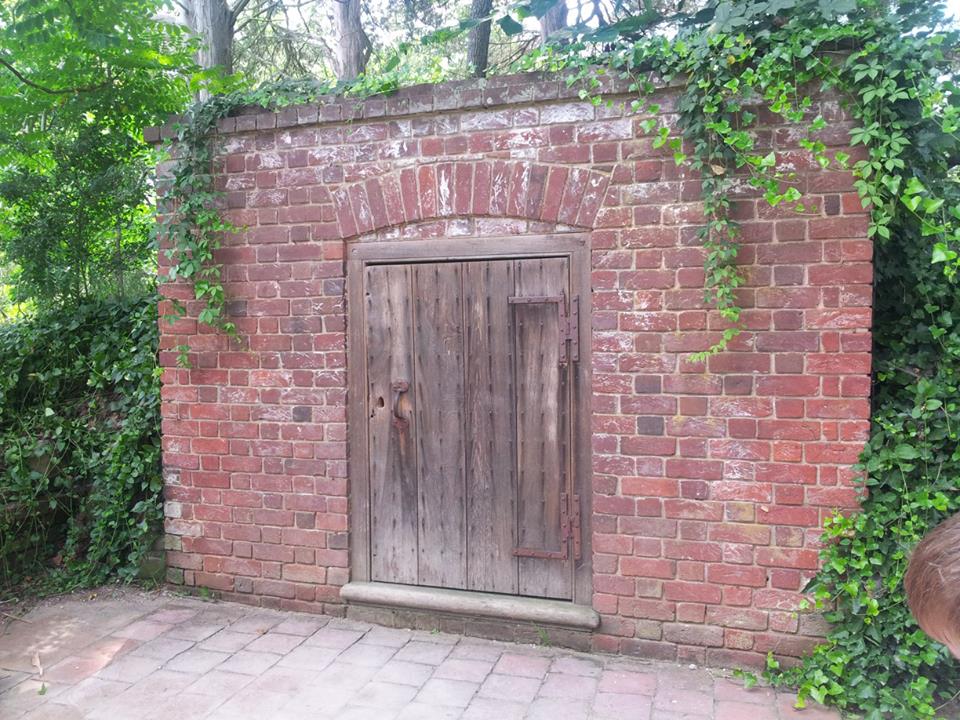 Washington set aside funds to construct a new family tomb after the original one deteriorated. The new tomb, which houses George and Martha Washington, among other family members, was completed in 1831. Photo courtesy of Laura Maple 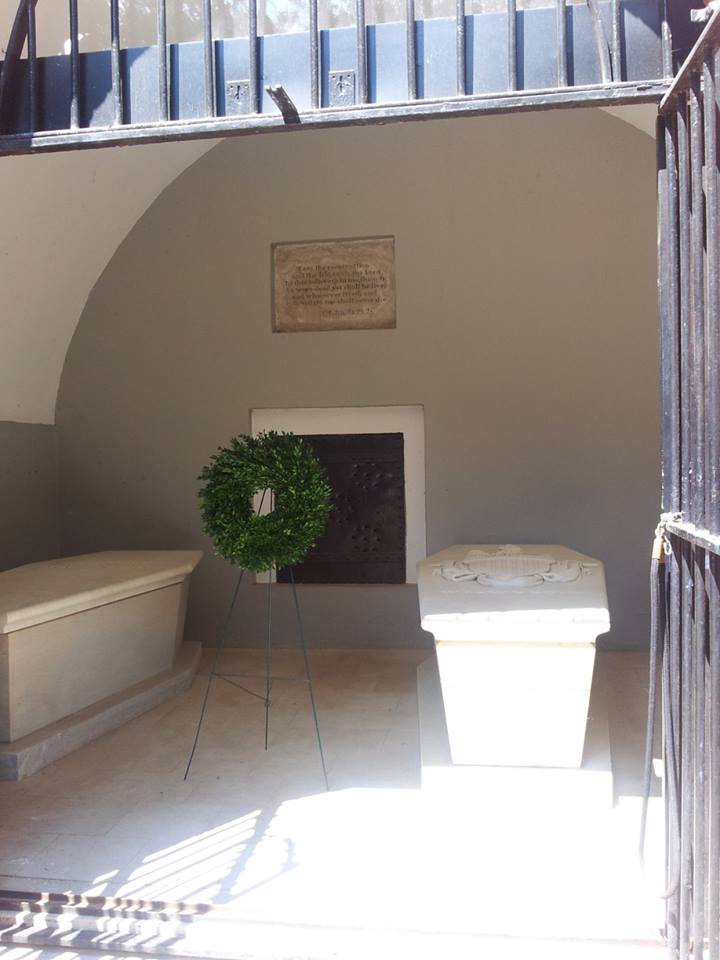 This breathtaking view of the Potomac River has always been a focal point of Mount Vernon. For more than 50 years, the Ladies Association has preserved the viewshed from development, helping establish Piscataway National Park across the river. 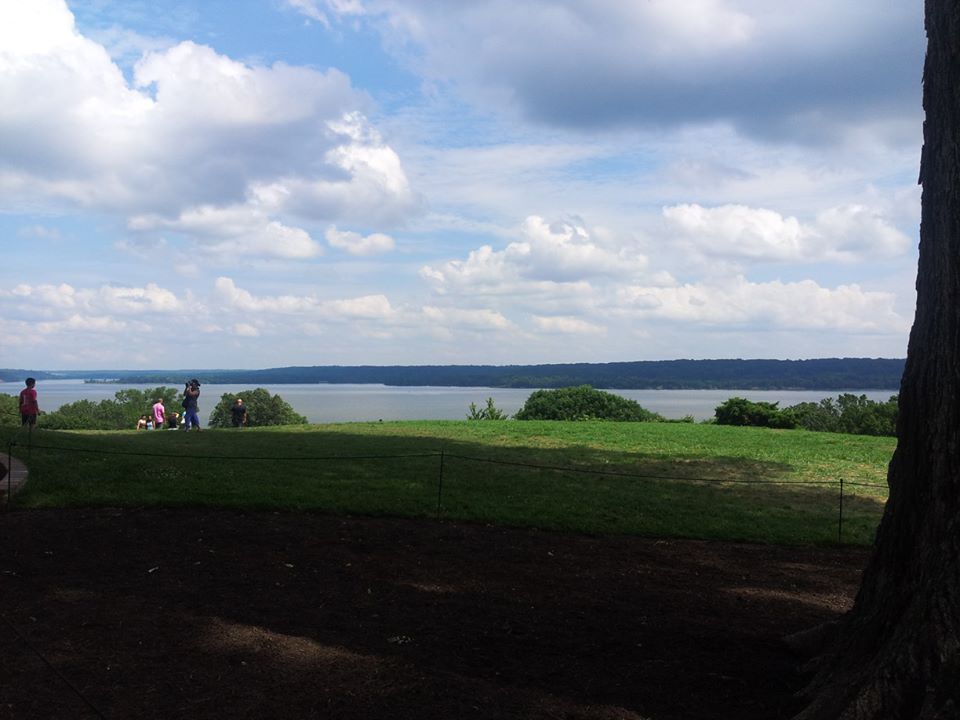 The greenhouse in Mount Vernon's Upper Garden, built in the 1780s and 1790s. One of the first greenhouses in North America, it provided a hot climate for tropical plants. Slave housing was located in the wings. Photo courtesy of Laura Maple 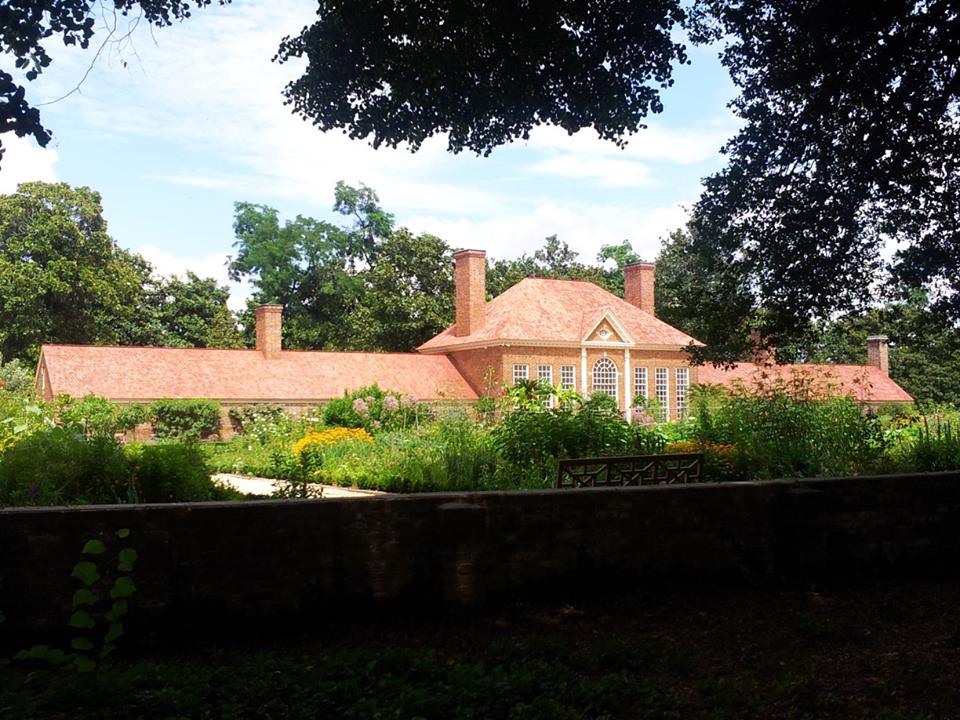 Mount Vernon in the mid-nineteenth century, prior to its restoration by the Mount Vernon Ladies Association. Photo courtesy of Wikimedia Commons. 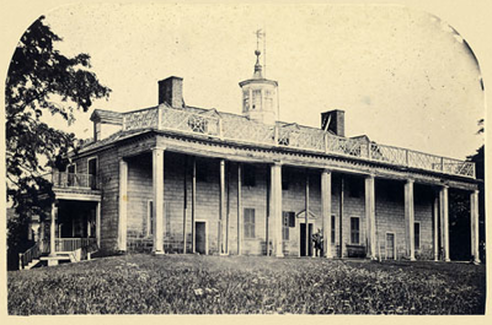 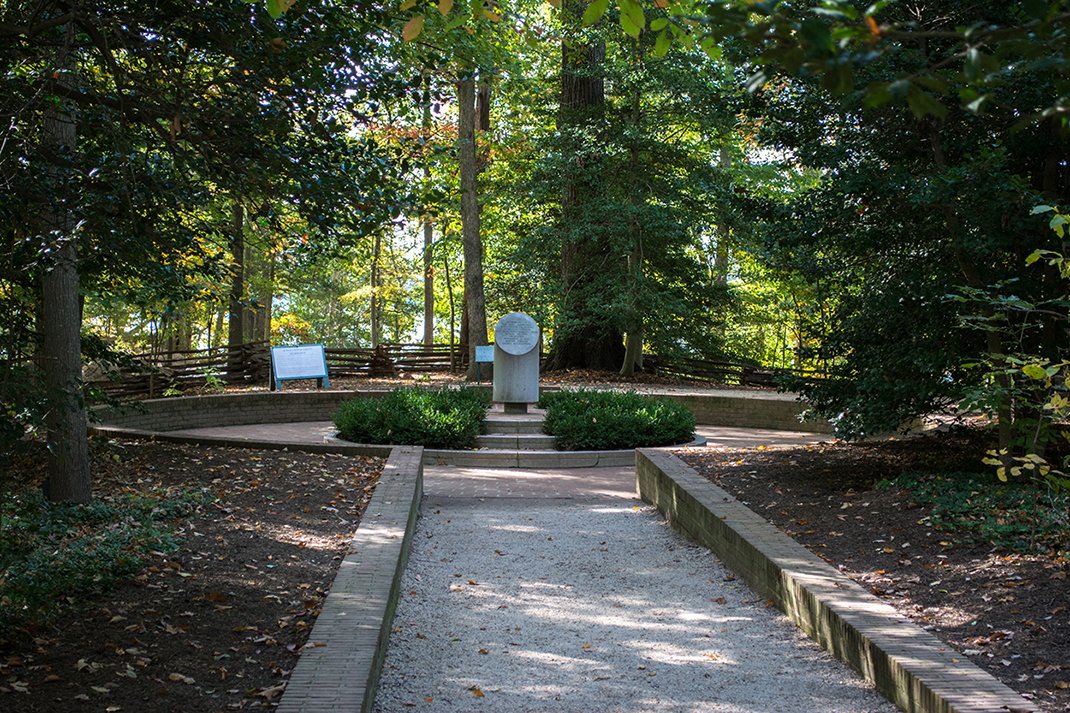 This unfinished obelisk, symbolizing the "unfinished" lives of people in bondage, is the centerpiece of the Slave Memorial. Photo courtesy of Tim Evanson, Wikimedia Commons. 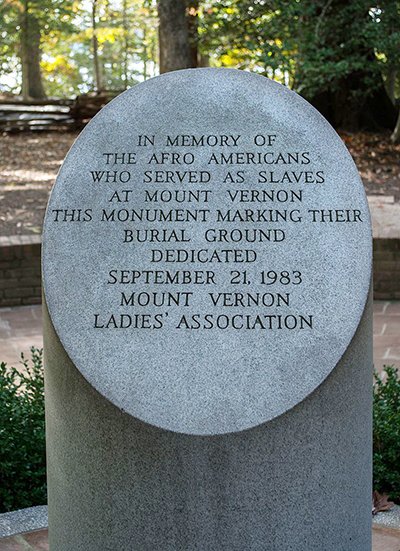 The history of the Mount Vernon estate began with George Washington’s great-grandfather, John Washington, who came to the Colony of Virginia and settled the Little Hunting Creek (Mount Vernon’s original name) plantation in 1674. The property, consisting of about 5,000 acres of land along the Potomac River, descended in the Washington family to George’s father, Augustine. In 1735, when George Washington was about three years old, Augustine and his family moved from “Wakefield” to the site. George Washington inherited the property after his half-brother’s death in 1752, but he was unable to take up residence at Mount Vernon because of his military service. It was only after his marriage to Martha that George began residing in the property, making massive improvements to the structure. George and his family lived there for 15 years until he was called back into public service for the Revolutionary War.

Following the War, George returned to Mount Vernon, where he continued his agricultural prospects and committed to massive landscaping improvements. However, he had to leave again in 1789 when he was elected to be the first President of the United States. During his two terms, George is estimated to have spent about 434 days in residence at Mount Vernon. He returned to his estate after the presidency, conducting repairs and gardening as well as socializing and entertaining guests.

On December 12th, 1799, Washington set out to explore his property on the cold and wet winter day. After spending all day in the fields looking and exploring, he then ate supper without changing the clothes he was wearing. He awoke the next morning with a severe sore throat, which became increasingly hoarse as the day went on. On December 14th, Washington died in his Mount Vernon home. Although he was first buried in the United States Capitol, he was later transported back to Mount Vernon to be buried in the family’s tomb in 1837.

Mount Vernon in the 19th and 20th Century

Following Washington’s death in 1799 and Marsha’s death in 1802, the property was passed to his nephew, Bushrod Washington, and then to his great-grandnephew, John Augustine Washington III. By the 1830s, proceeds from the farm were low, funds had dwindled, and the wear and tear of hundreds of visitors to Mount Vernon took its toll. John Augustine Washington III was unsuccessfully in selling the mansion until 1858, when the Mount Vernon Ladies' Association bought it for $200,000 (equivalent to about $5,539,455 in 2015).

Through the Association, Mount Vernon was fully restored. Independent of the US Government, this Association and its superintendents of the property successfully doubled the acreage, collected numerous historic artifacts and other items, and put in place a number of improvements George Washington had planned but was never able to complete.

By December 19th, 1960, Mount Vernon was designated a National Historic Landmark, and it was later listed on the National Register of Historic Places.

Today, George Washington’s Mount Vernon Estate features countless offerings to guests. In fact, since 1860 when it opened to the public, the site has been one of the nation’s most popular historical sites, entertaining and informing over 85 million people. Guests today can tour through the mansion and other original structures, including the tomb of George and Marsha Washington. Furthermore, structures such as a reconstructed distillery, the Pioneer Farm, and other buildings offer a poignant and nuanced view into George Washington’s life and business enterprises. Other educational features of the site include the Ford Orientation Center, the Donald W. Reynolds Museum and Education Center, and the Fred W. Smith National Library for the Study of George Washington at Mount Vernon.