The precise location of the former Rolesville Slave Auction Block is unknown. Historical sources including oral histories from residents indicate that slaves were sold in the town square, which stood at the location where Young Street intersects with Main Street.

This is a picture of the intersection of Main St. & Young St. in Rolesville. During the antebellum period there was a town square where elections, civic events, and slave auctions took place. 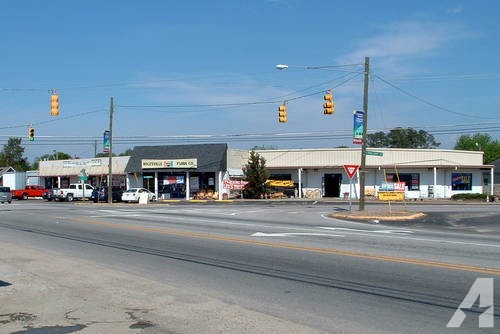 Mr. Bill Sharpe, writer for State Magazine, conducted an interview with a Wake County local, Mr. Green. From his interview he stated, "Maybe you didn’t know it, but Rolesville was once the largest slave market in the State, and second only to New Orleans in this trade, according to local tradition. The slaves were up for auction in a sort of town square, and people came from all around to buy and sell. …The curious part about Rolesville which Mr. Green showed me, is the fact the stores are built around a diamond-shaped plot which the founder, William Roles, deeded to the town away back when. This is the reason the buildings are facing at such odd angles to the highways, and it was in this square that the slave business went on." (1)
According to Historians at UNC, in the early Nineteenth century, William H. Roles came to the area and began to purchase land; he eventually chartered the town in 1837. Rolesville Baptist Church was also started around this time. During that time, Rolesville served as a well-known stagecoach stop.  In addition, Rolesville was the site of a large slave market, at which thousands of slaves were bought and sold by buyers who traveled there from North Carolina’s surrounding states (South Carolina, Maryland, Virginia, Georgia, Tennessee, and Kentucky). 1 At the time of the Civil War, a total of fifty slaves were owned by White families of Rolesville. (2)