The Ottendorfer Branch is the oldest New York Public Library branch still in its original building, and one of the oldest buildings in the city built specifically as a public library. In the late 1990s, the library was renovated with funding from the Adopt-a-Branch program and the Scherman Foundation. The facade and original wood floors were restored, an elevator and central air system installed, and new facilities were added, including a computer lab and a children's story hour room. The branch still holds many of the original books selected by Oswald Ottendorfer, and it maintains a strong multilingual collection with a particular focus on German. 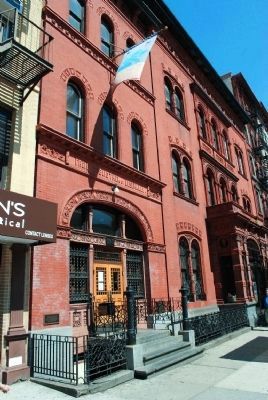 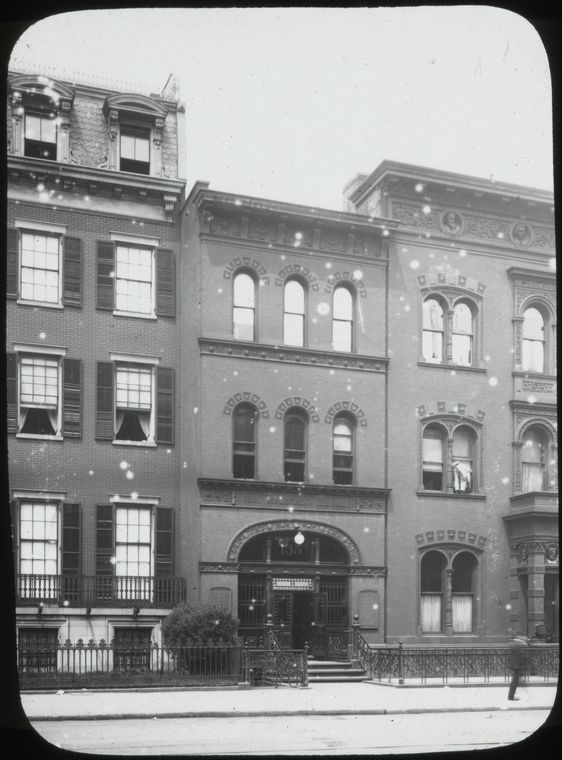 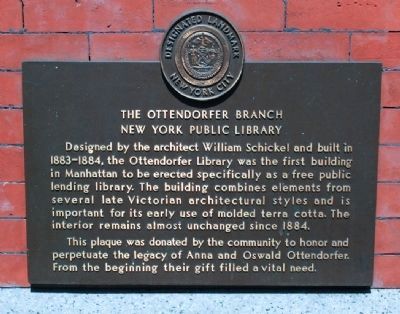 During most of the 19th century, New York City's libraries were privately owned holdings catering to scholars and students, but not to the poor or the increasing immigrant population. From 1830 on, city newspapers criticized the lack of a free public library to serve the general community, but not until 1878 was the New York Free Circulating Library founded. This institution was, at first, funded by private philanthropists including Andrew Carnegie, J.P. Morgan, Cornelius Vanderbilt, Jacob H. Schiff, Henry G. Marquand, among others. Andrew Astor (son of the founder of the Astor Library) served on the Board of Trustees. As the library grew in its first few years, the establishment of neighborhood branches became a goal of the board. The first of these, opening on December 7, 1884, was established by Oswald Ottendorfer (1826-1900), a library board member and German immigrant, and his wife Anna.

The East Village neighborhood in which the Ottendorfer Branch opened was, in the late 19th century, known as Kleindeutschland (Little Germany) due to its large population of German immigrants and their descendants (150,000 people). Anna Uhl (1815-1884) immigrated to New York with her husband, Jacob, in 1844. Jacob Uhl was a printer, and purchased the German-language newspaper, Staats-Zeitung, which was founded in 1834 and is still in publication. When Jacob died in 1853, Anna inherited the paper. In 1858, Oswald Ottendorfer became editor-in-chief of Saats-Zeitung, and married Anna the following year. Before his emigration, Oswald had attended the Universities of Vienna and Prague, and had been active in Austrian politics. The Austrian Revolution of 1848 failed, and Ottendorfer fled to Switzerland, emigrating to the United States in 1850. He found work as a laborer before being hired at Staats-Zeitung, a well-respected, popular, and conservative paper which became, under Ottendorfer's management, the largest-circulating German-language newspaper in New York. Ottendorfer was one of the most prominent and wealthy inhabitants of Little Germany, involved in both local and national politics. He served as alderman in 1872 and ran (unsuccessfully) for Mayor in 1874 as an anti-Tammany Democrat.

Both Anna and Oswald were active philanthropists. Anna Ottendorfer gave to a fund for German schools in New York City, funded a Women's Pavilion for the German Hospital, and established the Isabella Home for elderly, indigent German women. At the same time that the Ottendorfers were involved with the library, they were also working to establish a public health clinic, the German Dispensary (Stuyvesant Polyclinic). Anna purchased land for the dispensary in 1883 and hired a fellow German immigrant, William Schickel, as the architect. The land acquired was enough for two buildings, and the Ottendorfers decided to build a library next to the dispensary, serving both the physical and mental needs of their community. German Empress Augusta presented Anna with a silver medal of merit for her philanthropic work in November of the same year.

William Schickel (1850-1907) designed both the dispensary and the library, which share many architectural elements in common. The three-story Freie Bibliothek und Lesehalle (Free Library and Reading Room) combines the Queen Anne and neo-Italian Renaissance styles, and Schickel's extensive use of terra cotta decorative elements on the pair of buildings is one of the first examples of New York architecture featuring the material. The library began with 8,000 books, half in German and half in English. Through the bilingual selection of reading material, Oswald Ottendorfer hoped to assist immigrants in assimilating to American culture, as well as Americans in learning the German language. The Ottendorfers donated the library and an initial endowment of $10,000 to the New York Free Circulating Library while the building was still under construction, on January 10, 1884. In May of the same year, before either the dispensary or the library opened, Anna Ottendorfer died. The library was opened on December 7, with leading members of New York's German community in attendance. Patrons could use the second floor reading rooms (one for men and one for women) and, with references, anyone over the age of twelve could borrow one book at a time. The stacks were originally closed, with English on one side and German on the other, and a librarian had to retrieve any books the patrons wished to view. In 1897, Schickel added a rear extension to the building for open stack access, and in 1900 a children's room replaced the separate women's reading room on the second floor.

In 1886, when the original proposal for the establishment of the New York Public Library and its branches was made, the board of the Free Circulating Library had opposed it, seeing the NYPL as competition. During the following decade, however, the two library boards agreed to merge, with the 11 branches of the Free Circulating Library becoming part of the NYPL system. Though the Little Germany neighborhood became less German in the ensuing years, the 1930s saw a new influx of German-speaking European refugees to the area. Charlotte Hubach, the librarian at the time, began a lecture series called "Literature in Exile," as well as inviting patrons to opera broadcasts on the second floor.

The Ottendorfer Branch is the oldest New York Public Library branch still in its original building, and one of the oldest buildings in the city built specifically as a public library. In the late 1990s, the library was renovated with funding from the Adopt-a-Branch program and the Scherman Foundation. The facade and original wood floors were restored, an elevator and central air system installed, and new facilities were added, including a computer lab and a children's story hour room. The branch still holds many of the original books selected by Oswald Ottendorfer, and maintains a strong multilingual collection with a particular focus in German.

Designed by the architect William Schickel and built in 1883-1884, the Ottendorfer Library was the first building in Manhattan to be erected specifically as a free public lending library. The building combines elements from several late Victorian architectural styles and is important for its early use of molded terra cotta. The interior remains almost unchanged since 1884.

This plaque was donated by the community to honor and perpetuate the legacy of Anna and Oswald Ottendorfer. From the beginning, their gift filled a vital need.

Erected by City of New York.

"About Our Locations." The New York Public Library. Accessed May 22, 2017. http://www.nypl.org/about/locations.