The New York Marble Cemetery, also known as the Second Avenue Cemetery, is one of the oldest burial grounds in Manhattan. Located amidst the monuments of East Village, the cemetery was established in 1830 by Perkins Nichols. Over two thousand people have been interred in the cemetery, the last of which was in 1937. This cemetery is unique in that each person is placed in subterranean vaults more than 150 feet below the ground. Instead of gravestones, the vaults are marked by plaques embedded in the surrounding walls. It is a designated New York City Landmark and listed on the National Register of Historic Places. It should not be confused with the nearby New York City Marble Cemetery, which was also built by Mr. Nichols.

The cemetery as it appears today

Entrance to the cemetery is via iron gates 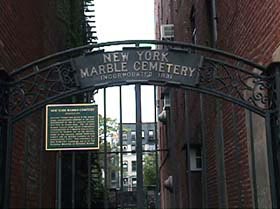 The walls of the cemetery feature marble plaques that mark each vault (http://evpcnyc.org/) 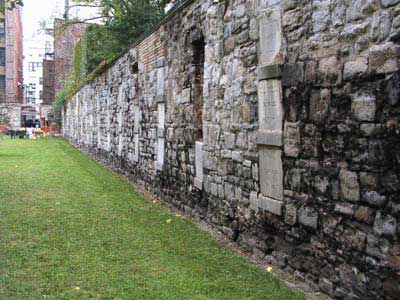 During the early 19th century, the city of New York was plagued by outbreaks of yellow fever, scarlet fever, measles, cholera, pneumonia, and whooping cough. The population of the city grew paranoid about traditional coffin burials, believing that the fever was secreted by corpses and that the usual depth of a few feet was much too shallow. In response, the burial by coffin was banned in parts of the city from the late 1820s. In 1830, Perkins Nichols established the New York Marble Cemetery. Rather than offering the outlawed casket burial options, this cemetery provided over one hundred and fifty dry and tightly sealed vaults that promised to prevent the spread of infection.

Each vault was made of solid white Tuckahoe marble and was buried ten feet underground. Pairs of vaults were accessed via steep stairs that were covered by heavy stone slabs, themselves buried by soil when not in use. Some caskets had small windows installed to allow visitors to view their dead relatives. The so-called “Dead House” was located on the cemetery’s southwest corner. It was used to store coffins that had just arrived before they were lowered into the vaults.

Many famous figures from New York’s past have been buried in these vaults: Luman Reed, Anson G. Phelps, Uriah Scribner, Theodore Gordon, Mayor Aaron Clark, Congressman James Tallmadge, and Benjamin Wright. President James Monroe was even temporarily buried at the cemetery. Although some interments were transferred to rural graveyards in the 1840s, the capacity of two thousand burials was soon filled. A second cemetery was subsequently built by Perkins Nichols around the corner: the New York City Marble Cemetery

The last burial took place in 1937, though families who own vaults in the cemetery have the option to use them. The Dead House was dismantled in 1955. The New York Marble Cemetery is not generally open to visitors, apart from every fourth Sunday between April and October and other assorted dates. Entrance is via 2nd Avenue, through a wrought iron gate that was installed in 1908. Continue down a narrow alley leading to the original 1854 entrance gates. Visitors can also visit the nearby Bowery, Provenzano-Lanza Funeral Home, the Anthology Film Archive, the Church of the Nativity, and the Amato Opera Theater.

It is usually open to visitors on the fourth Sunday of each month, April through October, from 12 to 4 PM, as well as several other weekends throughout the year.