Sybil's Cave is perhaps Hoboken's strangest historical site and it continues to be shrouded in mystery due to an unsolved murder. Today the site is part of the Stevens Institute of Technology but in 1832 it was a part of the property owned by the Stevens family. At that time, many people went to places along the Jersey shore that to rest and relax. The Stevens dug a thirty-foot cave to reach a natural spring and began selling drinks of the water. Soon, a restaurant next to the cave was added. However, by the 1880s, the water was deemed unsafe to drink. A tavern was opened and the cave was effectively closed off. As for the murder, on July 28, 1841 the body of Mary Rogers was found near the cave. Her boyfriend was questioned but not charged with anything, but he continued to be hounded and sadly committed suicide (poison) at the cave. Another theory speculates that it was a botched abortion that killed Mary. Today the cave entrance is blocked off by an elaborate stone facade and gate to prevent people from going in. Archaeological studies were undertaken in 2007 and 2012 to see what was there and to help determine how the site could be used. 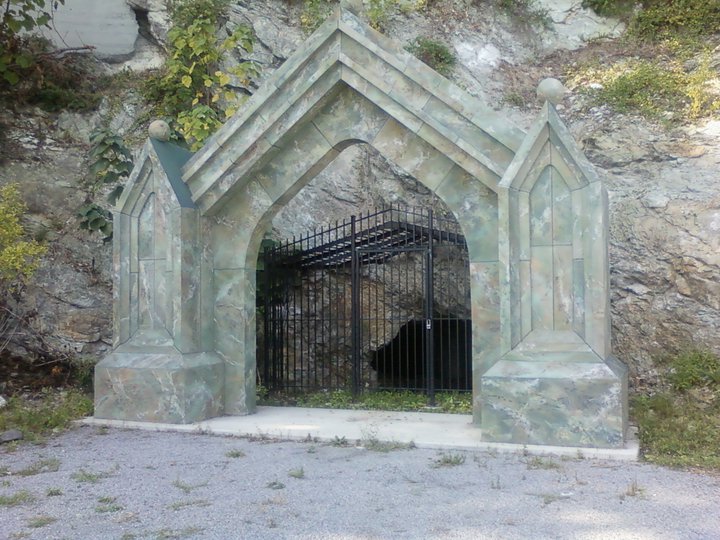 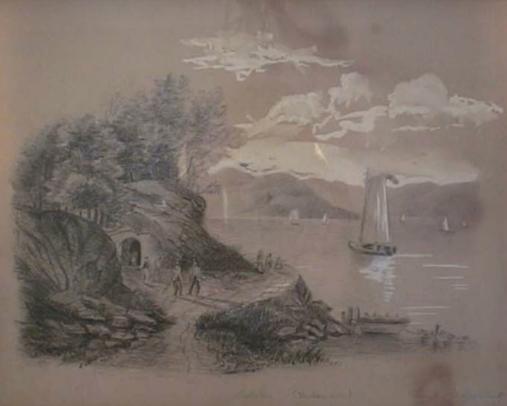 Tavern and picnic benches outside the cave (www.hobokenmuseum.org) 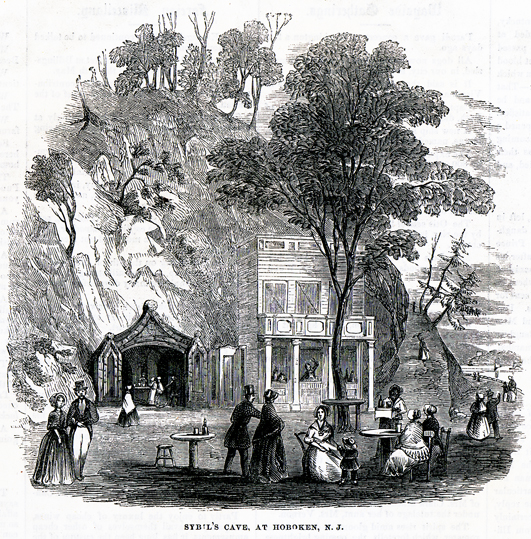 Author Edgar Allen Poe based his story "The Mystery of Mary Roget" on the Rogers' case and later modified it to account for the botched abortion theory.

The cave is first mentioned in travel diaries in the 1830s, when it was first excavated from the greenish-brown rock to reach the natural spring within and to serve as a decorative folly with its carved facade. Colonel John Stevens owned a nearby estate and operated a ferry between New York City and the Hoboken waterfront. People would walk along the river free from the stresses of the city, and picnic on tables and benches close to the mouth of the cave. Businesses gradually established themselves along the River Walk to serve these visitors, including taverns and inns. One of these was located next to the cave.

In July 1841 the body of twenty one year old Mary Cecilia Rogers was discovered by James Boulard and Henry Mallin close to the cave. She was a clerk working in a tobacco store in New York and had been missing for a few days. The scandal drew national attention by being widely reported in the tabloids, causing a surge in the number of visitors to the cave. Multiple interpretations of what happened to her have been made, ranging from murder to a failed abortion, but nonetheless it became a tragic part of the site’s heritage.

During the 1870s the cave and river walk to lose their rural allure with increasing shipping and industrialisation on the waterfront. By the 1880s the spring water was no longer being sold, and a tavern was built in front of the cave, which was used for storage. The tavern later became a gin mill, before becoming abandoned and eventually demolished in 1937. The cave was filled in during the 1950s, and “rediscovered” in the early 2000s by two local explorers. In 2007 the cave was excavated, and a new arch and fence was installed at the cave entrance. In 2009 a comprehensive archaeological investigation of the cave was made, and the results were published in 2012. There are plans to ensure the cave’s structural integrity and reopen it as a tourist destination, yet to this day it remains closed to visitors.