In 1842 Curran Hall, also known as the Walters-Curran-Bell House, was built by Ebineezer Walters. In 1849, it was purchased by James Moore Curran, a young lawyer, for his wife, Sophie Fulton. The home belonged to the Woodruff family after that time and was passed down through generations until it was purchased by the City of Little Rock for rehabilitation in the 1990s. Curran Hall now serves as Little Rock's Visitor Information Center and the offices for the Quapaw Quarter Association.

Curran Hall after rehabilitation, 2012 Courtesy of the Quapaw Quarter Association

Curran Hall during rehabilitation, ca. 1990s Courtesy of the City of Little Rock 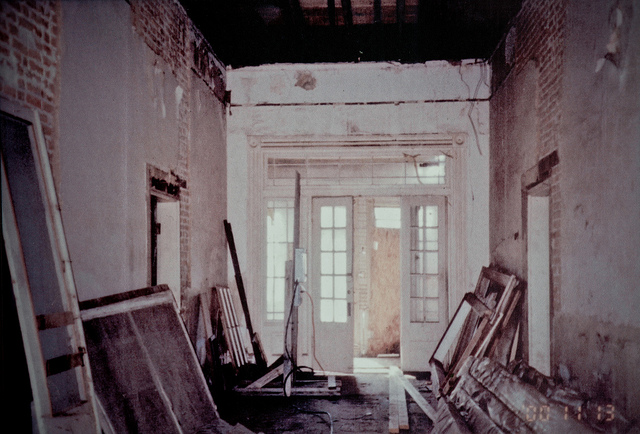 Curran Hall Floorcloth, 2012 Courtesy of the City of Little Rock 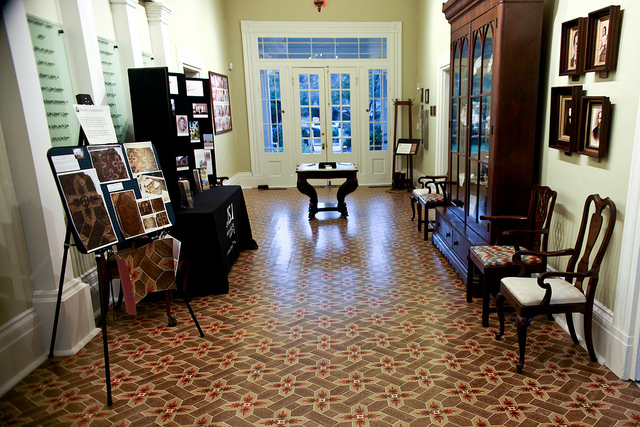 Construction of Curran Hall began in 1842. The home was a wedding gift from Colonel Ebenezer Walter, a partner in “Picher and Walter, Merchants,” to his wife Mary Starbuck. Mary was the niece of Chester Ashley, one of the founders of the city of Little Rock. According to widely-accepted tradition, notable architect Gideon Shryrock designed the house. The home is a classic example of Greek Revival architecture seen in Shyrock’s designs throughout Little Rock, including the Old State House and Trapnall Hall. Mary never saw her gift through to completion, she passed in 1843.  Her husband sold the home and moved out of state before ever occupying it. The original home took up five acres with subsidiary buildings.

David J. Baldwin bought the section of land that contained the main home from Mr. Walter. The city was still young and most homeowners in the area were transplants from other parts of the country. Baldwin and his wife only lived in this “new brick dwelling” for a few years, and sold the home to James M. Curran in 1849.

Curran established a law practice in Little Rock and married Sophia Fulton in June of 1849. When Curran died in 1854, his daughter, Alice, kept the home until 1881. The home was eventually sold to Mary Woodruff Bell, daughter of Arkansas Gazette founder William E. Woodruff, in 1884. The home remained in the family until 1997, when it was purchased after the Quapaw Quarter Association brought the importance of its preservation to the attention of the City of Little Rock.

The home was purchased in 1997 with the intention of restoring it to become the Little Rock Visitor’s Center to those traveling along Interstate 30. Before the restoration, the home had been changed drastically; much of it did not resemble the original design. The front porch doric columnns were extended across the front facade of the house creating a large porch. The rear annex is a replication of the detached kitchen and guest quarters that was recreated from information acquired from oral interviews with descendants of the house. The home seen today is an effort to replicate as closely as possible, what would have been here in 1842, down to the reproduction of nineteenth century floor cloth in the entry. Curran Hall reopened as the Little Rock Visitor's Information Center in 2002.