This small sidewalk marker indicates where the first legislature of the Washington Territory took place in 1854. Shortly after Washington was incorporated as a territory, and Olympia named as its Capitol, The legislature met in the second story of the Parker Coulter building, a dry goods store built by Edmund Sylvester in the center of town. This initial meeting established not only the members of the territorial Council, but also laid down the framework for future legislation. At the time of the meeting, there were only 4,000 settlers living in the territory and Olympia itself was at best a small frontier town, with a few dry-goods stores and homes and dirt roads. Today the marker sits across the street from the Old City Hall. 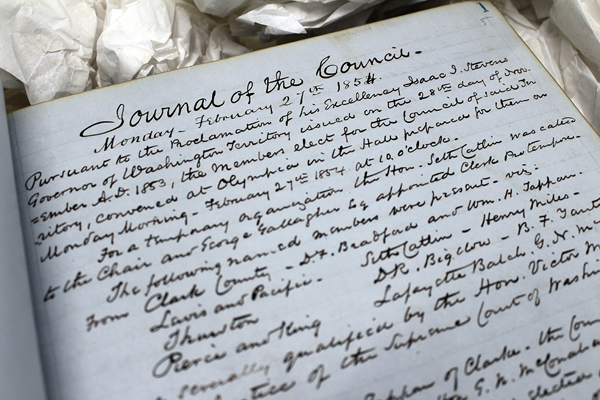 The Parker Coulter building around 1900. This small store is where the original Legislature met. 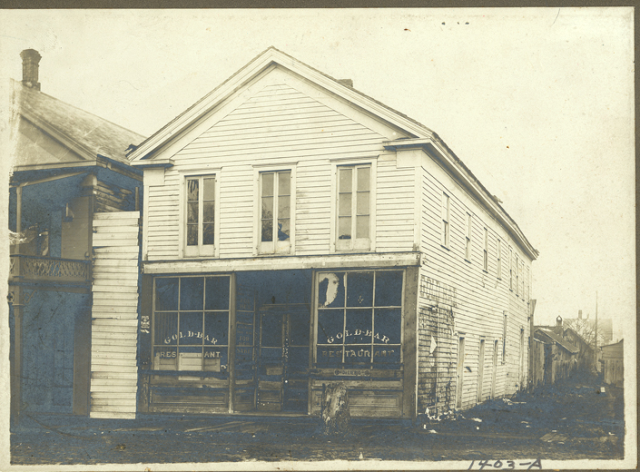 The area where the Parker Coulter Building originally stood, today. 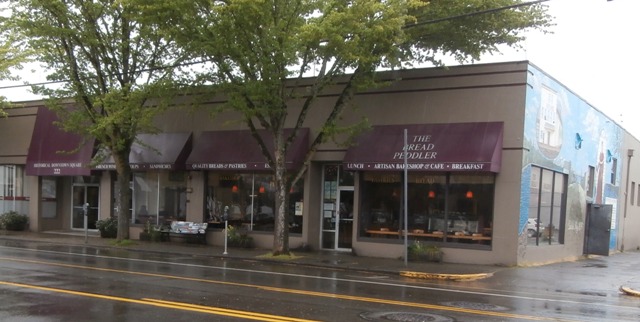 Less than five years after Olympia became a town, it was named Capitol of the Washington Territory. This gave it the prominent position of hosting the Washington Territorial Legislature in 1854. The first legislature took place in the second story of the Parker Coulter building, a drygoods store built by Edmund Sylvester, who was instrumental in the creation of Olympia and was the town proprietor.(Brazier, 3)

This first legislature dealt mostly with the selection of its committee leaders, representatives, and initial laws. The members were all newly elected, the elections took place on January 30th and the legislature met on February 27th. In addition to difficulties of their new positions many of the members of the legislature faced hardship in merely getting to Olympia to perform their duties. Pacific county, which is about eighty miles away from Olympia, had the worst luck on this matter.(Ibid.)

Their first representative from Pacific County was J. L. Brown, who was nominated in 1854, but died before the January 30th Election. Jehu Scudder was elected in his stead and proceeded the long travel to Olympia. There two ways to reach Olympia at the time: by land or by sea/river. Either way held its own perils, and Mr. Scudder succumbed to them, dieing on route to Olympia in February. The next representative of the ill fated county was Henry Fiester, who actually made it to the capitol and met with the legislature on March 30th. However, after the meeting was finished me met with other members in a bar. While there he fell from his chair, dead. The county had no representation until James Strong, a lobbyist in Olympia received a proclamation for an election from the Governor. He took this and rode to Pacific county, and returned shortly after with news of his nomination and election. He was quickly seated on April 14th and served for the rest of the session.(Brazier, 4)

Towards the end of the session the legislature began to focus on the construction of roads and the election of territorial officers. Both topics proved controversial. Roads brought up the cost and burden to be born by the counties through which they would pass. The territorial officers were: printer, treasurer, auditor and librarian. Printer proved especially controversial and political for the next five decades. However, most posts went to the democratic party, as the Whigs were in a state of disarray caused by the slavery debate which was consuming the nation at the time.(Brazier, 5)

The First Washington Territorial Legislature, held in a small dry-goods store, in a barely developed corner of the Pacific Northwest, set the stage for what would become the state of Washington. The determination of its members, who faced death and disaster to perform their duties was an honorable example of the Pioneer spirit of the region in the mid 19th century. Today their original meeting location is still remembered by a plaque, on north Capitol Way.