This is the site of a famous three-story bar/brewhouse/tavern that was known as Tun Tavern. Tun Tavern was built by Deputy Governor of Pennsylvania, Samuel Carpenter in 1685 and is located just one block away from the Delaware River. On top of serving the local community foods and spirits, it also served as a meeting place for military and social organizations. One of the famous military meetings led to the birth of the United States Marine Corps on November 10, 1775. Some of the noteworthy Americans who patronized the tavern are Robert Mullan and Samuel Nichols as well as John Adams and Benjamin Franklin.

This historical marker, placed on 11/11/2005, serves to commemorate Tun Tavern and it's establishment of the United States Marine Corps on November 10, 1775. Marines celebrate this birthday every year with a formal ball. (Google Images) 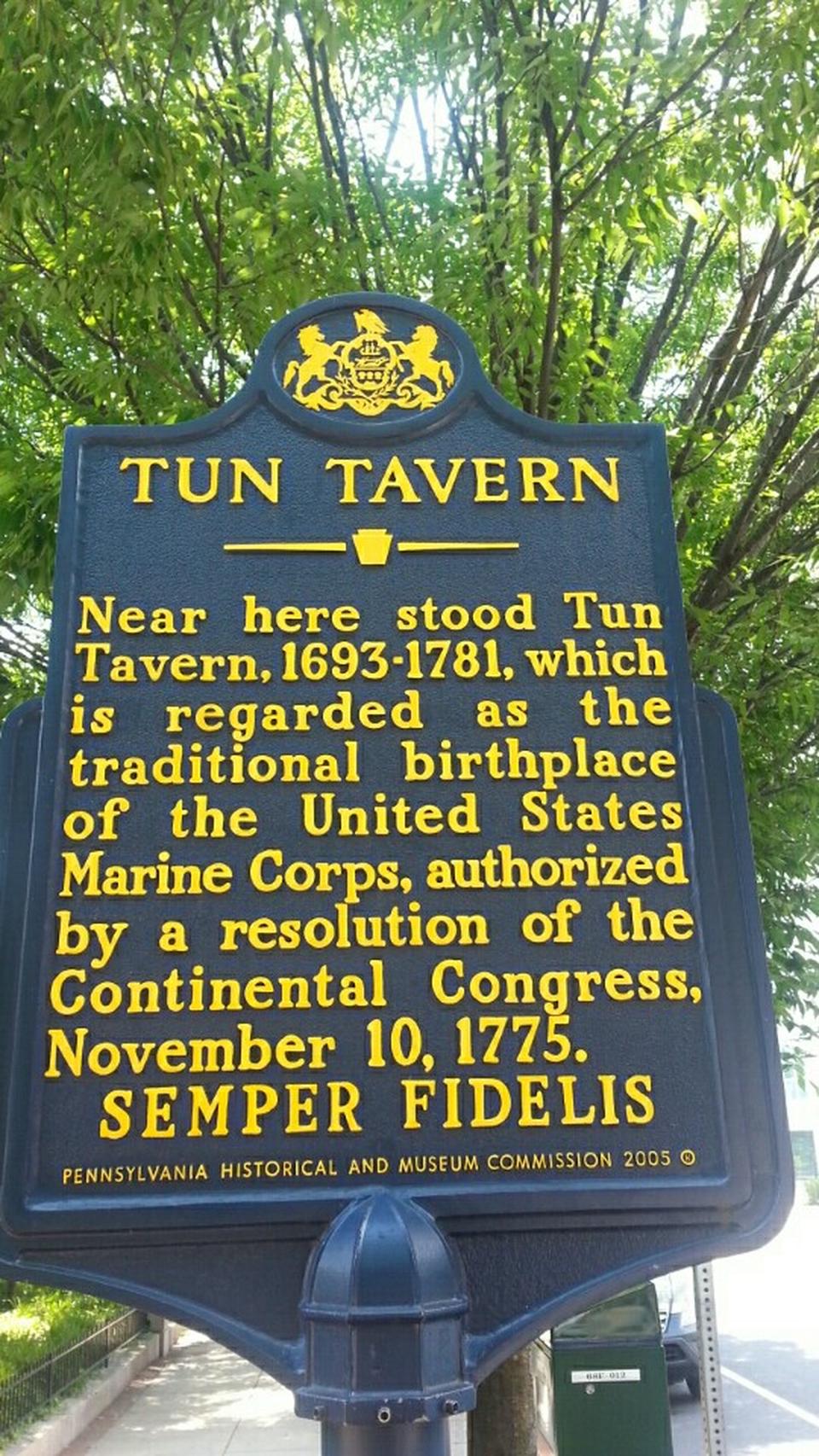 A sketch of the original tavern that stood at this location during the American Revolutionary War. This building unfortunately burned to the ground in 1781. It was the birthplace of many important organizations that still exist today. (Google Images) 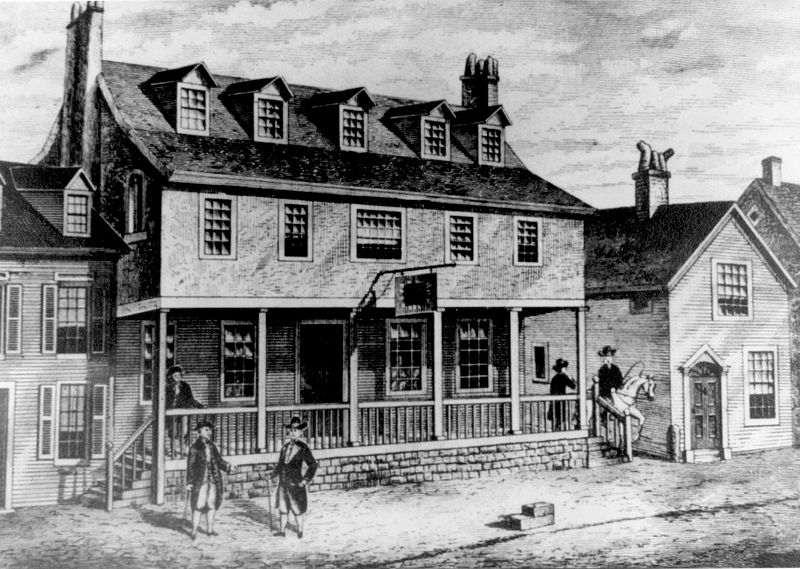 Tun Tavern is historically known as the "First Brew House" in Philadelphia and was established in 1685. Tun Tavern waterfront location placed it at the heart of the maritime trade and brought many merchants and businesses leaders together. This tavern's name is derived from the old English word "Tun" when translated means keg or barrel of beer. In an era when locally "crafted" brews were the rule, the tavern had a reputation for some of the finest beers available for thirsty colonists and seafarers. The tavern was also the site of many important meetings by prominent leaders and organizations to used the tavern in the colonial period.
One of the first famous meetings to take place at the tavern was the meeting of St. George’s Society which was held on St. George’s Day, April 23, 1720. This organization, known today as “Sons of the Society of St. George” was established to assist distressed or needy colonists. The organization assisted English subjects through the colonial period and American citizens from the Revolutionary War through later decades. The tavern serves as this philanthropic organization's meeting place until 1876, when tycoon Matthew Newkirk’s mansion came up for sale at 13th and Arch Street. The Organization acquired the building and dubbed it “St. George’s Hall”. The meetings were held at the new site until the building was torn down in 1903. St. Sons of St. George’s Society not only still exists today but has also expanded to other states and included assistance to anyone in need.
In 1732, Tun Tavern became the location of the inaugural conference of American Freemason order and also served as the polling place for the election of the first “Grand Master of the Grand Lodge of Pennsylvania.” Benjamin Franklin, a 33rd-degree mason at the time would become the third Grand Master in 1734. Franklin's reputation as a great leader as well as author, politician, scholar, and activist would assist in the prominent reputation Tun Tavern would continue to build. In 1756, Tun Tavern became the centralized location for Benjamin Franklin’s recruitment efforts of the Pennsylvania Militia that would fight against native tribes and secured land for settlers. Benjamin Franklin would use this Masonic center to host Thomas Jefferson and George Washington during the Revolutionary War in contribution to efforts to bring all colonies under a single entity.
On November 10, 1775, Tun Tavern became known as the birthplace of the Marine Corps. When Masonic leader Robert Mullen was authorized by Congress to establish the Continental Marines, he would appoint the first Marine Corps Commandant, Capt. Samuel Nichols to lead recruiting efforts and the two battalions to be established. Four additional Marine Security Companies were also established to assist in George Washington’s efforts to defend Philadelphia. The Continental Marines were predominantly utilized by the Navy during the Revolutionary War to conduct amphibious assaults in places such as New Providence and twice in Nassau. The Continental Marines would eventually disband in April of 1783, only to reestablish in 1798 under the title of the United States Marine Corps.
Tun Tavern operated until 1781 when the historic watering hole burned to the ground. The original location is now paved over thanks to the construction of Interstate 95 at Penn’s Landing. A marker to commemorate Tun Tavern has been placed on the east side of Front St. across from Sansom Walk.