Listen to a narration of this entry's description by Susan Krysiak.

The 1879 Emlen Physick Estate is a four-acre estate that is open to the public and features the Physick House, Cape May's only Victorian House Museum. The home was designed by American architect Frank Furness, and is built in the Victorian Stick Style, a very muscular and unusual style for its time, with surprising architectural features such as corbelled chimneys, stick-like brackets on the porch, and jerkin-head dormers. Inside, visitors can tour the museum and hear about and see Furness' work up close, and hear about the Physick family who lived there. Many of the original Physick family furnishings are still on display. Furness was influenced by the industrial age and is renowned for his design of the Pennsylvania Academy of Fine Arts building in Philadelphia. The entire Physick Estate property was restored and continues to be maintained by the Mid-Atlantic Center for the Arts & Humanities, now known as Cape May MAC (Museums+Arts+Culture). The organization was formed in 1970 in order to save the estate from certain demolition. Also on the property are restored outbuildings including a Carriage House, which contains a restaurant, a Museum Shop and the Carroll Gallery, with changing exhibits on local history. 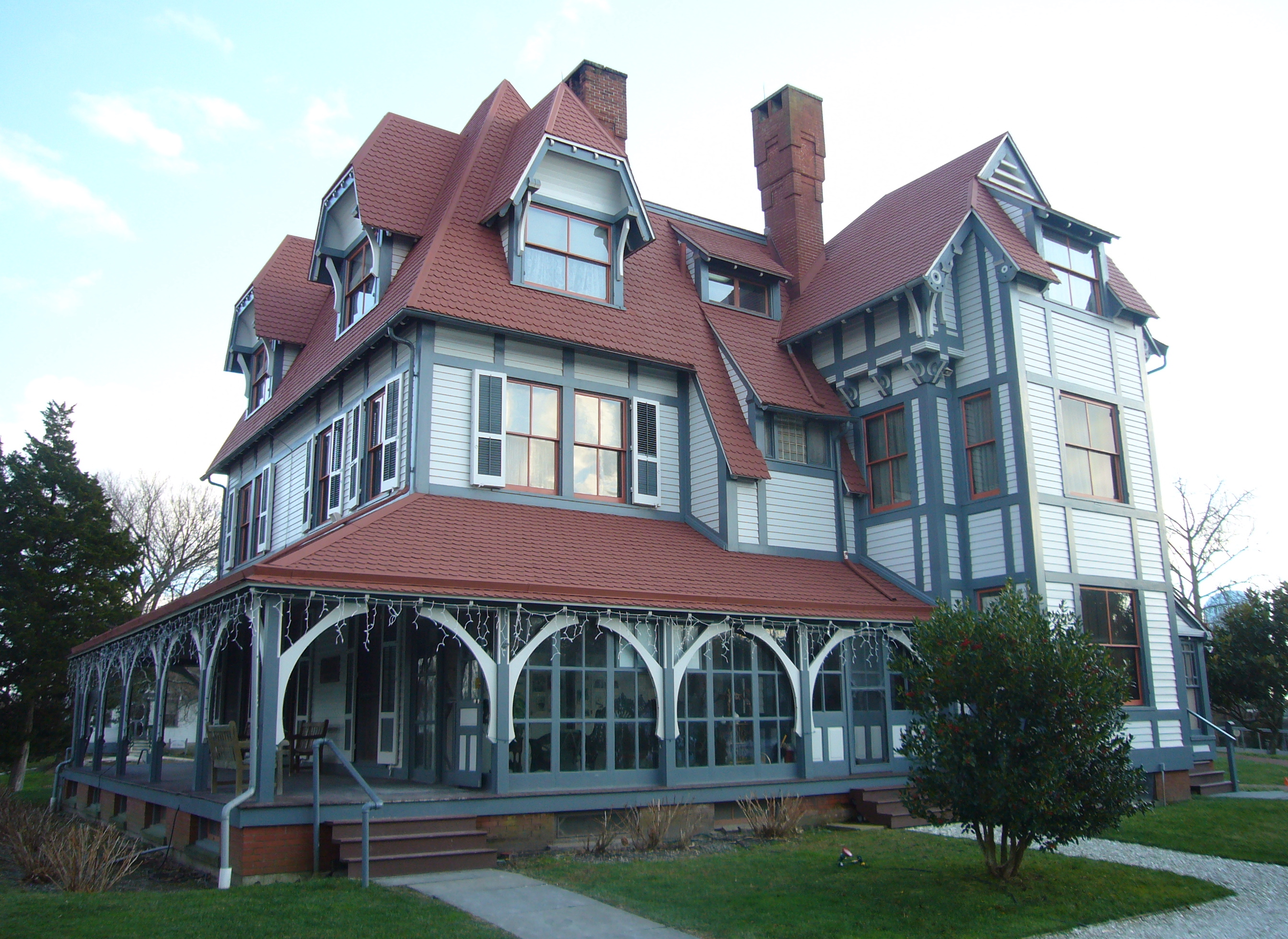 View of one of the rooms 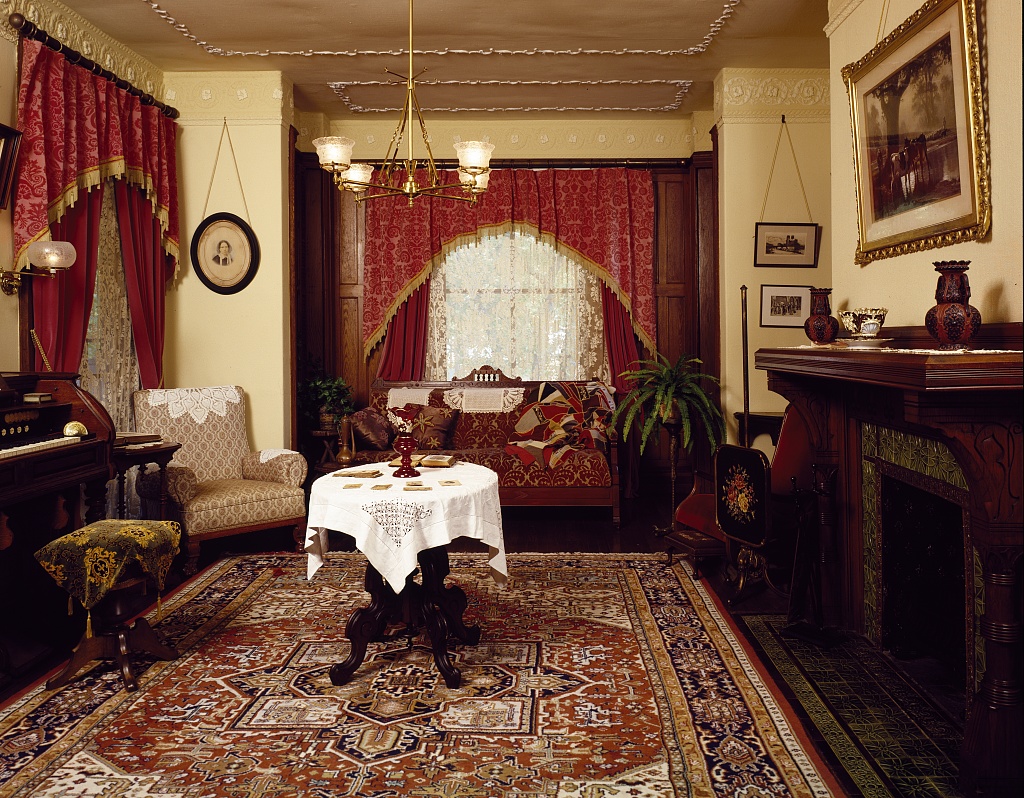 Listen to a narration of this entry's description by Susan Krysiak.

The Emlen Physick Estate, an 18-room mansion built in 1879 and designed by renowned architect Frank Furness, is one of the finest examples of Victorian “Stick Style” architecture in America. After decades of decline, the Physick Estate and the nine outbuildings on the four-acre Estate were saved from the wrecker’s ball and have been fully restored by the Mid-Atlantic Center for the Arts & Humanities (MAC), now known as Cape May MAC (Museums+Arts+Culture).

Furness (1839-1912), a Philadelphian, is acknowledged as one of the nation’s leading Victorian architects. He was selected as one of America’s ten greatest architects in a 1991 survey of architects, conducted by the American Institute of Architects. He’s best known today for his Pennsylvania Academy of Fine Arts in Philadelphia. Furness was the teacher of Louis Sullivan, who was, in turn, the mentor of Frank Lloyd Wright.

The Physick Estate was built for a rather unusual household: Dr. Emlen Physick, who never married; his widowed mother, Mrs. Frances Ralston; and his Maiden Aunt Emilie Parmentier. Dr. Physick was descended from a famous and wealthy Philadelphia medical family. His Grandfather, Dr. Philip Syng Physick (1768-1837) was known as the Father of American Surgery. He also invented the stomach pump. Among his famous patients were U.S. Chief Justice John Marshall, upon whom he performed a successful gall bladder operation in 1831, and Dolly Madison, the wife of the fourth President of the United States, who was a patient for several months during her husband’s term in office. His great-great grandfather, Philip Syng, Jr., was a silversmith who designed and executed the inkwell used by the signers of the Declaration of Independence. The inkwell is now on display in Independence Hall. Dr. Emlen Physick followed family tradition by completing medical training, but never practiced. In Cape May he lived the life of a country gentleman and animal breeder. He is remembered for having the first automobile in town – and for getting into the first auto accident.

The Physick Estate exterior is distinguished by the grid-like pattern on its exterior walls, its gigantic, upside-down corbelled chimneys; hooded “jerkin-head” dormers; distorted, oversized features (a Furness trademark); and huge stick-like brackets on the porch. The interior also bears the distinct signature of Frank Furness, who designed much of the interior moldings, fireplaces, and even furniture, repeating many of the same designs, patterns and details throughout. Many of the original Furness-designed furnishings are on display, as well as some from an 1889 renovation.

The largest Physick Estate outbuilding is the Carriage House, built in 1876, and the first structure built on the Estate. Today it houses a restaurant, the Carriage House Museum Shop, and the Carroll Gallery, hosting major exhibits yearly including an African-American exhibit presented in winter by the Center for Community Arts, a major exhibit from April through October presented by Cape May MAC on an aspect of local Cape May history, and an annual Christmas exhibit presented by Cape May MAC.

As the founders met to discuss ways of financing the purchase, they formed the Mid-Atlantic Center for the Arts, later renamed Mid-Atlantic Center for the Arts & Humanities, and today known as Cape May MAC (Museums+Arts+Culture). The City of Cape May purchased the property in 1973 using state and federal grant monies, and leased it to MAC for up to 99 years for $1.00 rent per year, with the proviso that MAC restore and maintain the estate for civic purposes. At that point, MAC began its work developing the Physick Estate into a nationally recognized Victorian house museum. Over $1 million and thousands of volunteer hours have gone into the project. Thus, what was once an overgrown, gutted derelict has been transformed into one of Cape May’s leading attractions – a top-quality museum with well-maintained grounds which host a wide range of community and cultural events.