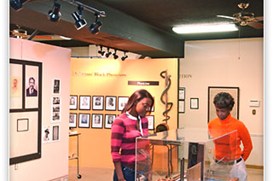 EMOBA has been a non-profit organization under the federal 501(c)(3) ruling since 1993  Its founder is Ernie Dodson whose birthplace is in Little Rock, Arkansas, and he is an alumni of the University of Arkansas at Little Rock (UALR). The location of EMOBA was purchased in 1993, and the building is the old historic First Baptist Church of Little Rock. EMOBA sits on a half-acre lot, and it also consists of a total of three separate buildings (The Encyclopedia of Arkansas History & Culture, 2015).
In addition, EMOBA is located in downtown Little Rock, and it covers a total of three-quarters of a city block. Specifically EMOBA is located between the block of 12th and 13th streets and Louisiana, and it is right next to the historic Quapaw Quarter district. EMOBA has also been listed as a historical site in the National Register of Historic Places. Future plans for EMOBA is to renovate the site for a possible performing arts theater (The Encyclopedia of Arkansas History & Culture, 2015).

As of now, the operating season for EMOBA is from the month of February to Labor Day in the month of September. In addition to being a 501(c)(3) nonprofit organization, EMOBA has also received financial contributions from other organizations such as New Futures for Youth, Inc who once gave them a grant for up to $10,000. Lastly, EMOBA serves as a somewhat multipurpose facility that hosts various company/business meetings, festivals, and even wedding events (The Encyclopedia of Arkansas History & Culture, 2015).

The Encyclopedia of Arkansas History & Culture. (October, 2015). Retrieved from http://www.encyclopediaofarkansas.net/encyclopedia/entry-detail.aspx?entryID=4085

Available for tours, must call ahead to schedule an appointment, February through September.