Barrington Hall is an 1839 Greek Revival-style mansion built as the residence of Barrington King who, along with his father Roswell King, was the founder of the town of Roswell, in northern Fulton County, Georgia. The home was owned by the family until 1995 and is listed on the National Register of Historic Places. It is owned and operated as a house museum by the City of Roswell. The surrounding seven acres of grounds feature the only antebellum public garden in the greater Atlanta area. 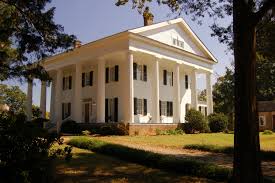 In the late 1820s, Roswell King—the father of Barrington King—came across the area that would soon be named for him while managing a coastal Georgia bank’s interests in the gold fields of north Georgia. He was impressed with its beauty, and realized the water power potential of Vickery Creek to drive textile mills. In 1836 he returned to the area with his son Barrington and they began planning the mill and the town.

Barrington moved his family to the area in 1838, and the next year the Roswell Manufacturing Company was incorporated. Barrington King selected the highest point in Roswell for his home. Built by Willis Ball in the Greek revival style of architecture, the house was finished in 1842.

In the summer and fall of 1864, Roswell was occupied by Union troops and according to family tradition, Union General Kennar Gerrard briefly occupied Barrington Hall. The King family fled Roswell before the occupation and returned after the war.

Barrington lived in the home with his wife, Catherine, and children until his death in 1866. Nine of the Kings’ children survived to adulthood: eight sons and one daughter. In 1883 the Kings’ daughter, Eva, moved back to Barrington Hall with her husband, Rev. William Baker, to care for her elderly mother.

The Baker family lived at Barrington Hall until Eva’s death in 1923. After Eva’s death, the house and property was left to Evelyn Simpson, Eva Baker’s favorite granddaughter, and Eva’s seven children. While the others wanted to sell the home, Evelyn was determined to keep it in the family. With help from family members, Evelyn raised enough money to purchase the house from the other Baker siblings. With little money and the help of her sister Katharine, Evelyn Simpson preserved Barrington Hall until her death in 1960.

Sarah Winner spent two years restoring the property. Her efforts won the Georgia Trust for Historic Preservation’s Outstanding Restoration Award. In 2005 she sold the property to the City of Roswell, with legal agreements designed to ensure the home would be permanently protected and open to the public for historic, educational, and cultural purposes.