This memorial to Heyward Shepherd was erected in Harpers Ferry, West Virginia in 1931. Heyward Shepherd was an African American killed during John Brown's raid at Harper's Ferry on October 17, 1859. Shepherd was a porter at the local railroad station and a property owner in nearby Winchester, Virginia. Shepherd died as a free Black man who was killed by abolitionists during a raid intended to liberate African Americans from bondage. He became a symbol to white people who opposed John Brown’s mission to end slavery. Although relatively little is known about Shepherd, whites who supported the "Lost Cause" of the Confederacy came to imagine Shepherd as evidence that African Americans were victims of the work of abolitionists and loyal to the South. The monument has been the center of controversy from the time of its inception, and now appears with an interpretive marker that offers the perspective of African American leader W.E.B. DuBois.

This is what the United Daughters of Confederacy and Sons of Confederate Veterans built to honor the "faithful slave" Heyward Shepherd. 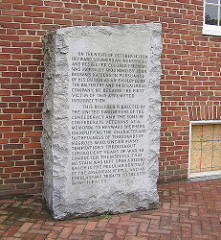 Present near the controversial monument is this marker, placed in 1995 in recognition of W.E.B. DuBois's perspective on the memorial. 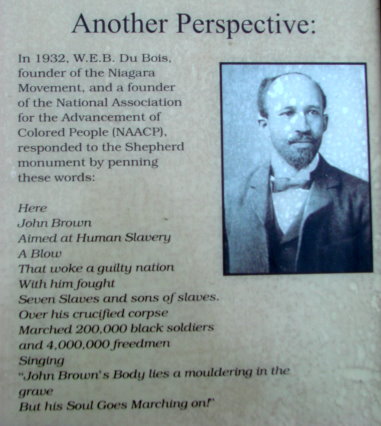 After the Civil War, both Northerners and Southerners built monuments to remember and commemorate the fallen. From the start of the Jim Crow era and into the 20th century, heritage groups in the South such as the United Daughters of Confederacy and the Sons of Confederate Veterans worked to support their ideology that slavery was a benign system by building monuments in honor of "loyal slaves" who allegedly stood by their masters in times of trouble.1

Throughout the late 19th and early 20th centuries, Southern heritage groups worked to celebrate the image of the faithful slave by creating memorials to individuals and representations of idealized "faithful slaves" who, according to these groups, accepted bondage as their natural condition. As deplorable as these monuments may seem to modern Americans, Southerners were quick to point out the complete absence of any monuments to African Americans in the Northern states despite the fact that 200,000 Black men served the Union army and navy. As monuments to faithful slaves and the Confederate cause appeared across the United States, African Americans faced disenfranchisement, segregation, and violence of the Jim Crow era.2

In 1920, the United Daughters of the Confederacy and the Sons of Confederate Veterans decided to dedicate a memorial to Heyward Shepherd. Opponents were concerned over the intent of the monument, originally known as the Faithful Slave Memorial, arguing it remembered idealized myths rather than the traumatic reality of slavery. These opponents attempted to prevent the erection of the monument but merely delayed its placement at Harpers Ferry for a decade. The Heyward Shepherd Memorial was placed near the scene of Shepherd’s fatal wounding and dedicated by a celebratory crowd on October 10, 1931. The event drew a sharp reaction from W.E.B. DuBois and the NAACP. African American leaders and students and faculty at Storer College condemned the event, while members of the administration participated in the dedication, reflecting the conflicting local perspectives over the memorial.3

The inscription on the Heyward Shepherd memorial reads:

On the night of October 16, 1859,
Heyward Shepherd, an industrious
and respected colored freeman,
was mortally wounded by John
Brown’s raiders, in pursuance
of his durites as an employee of
the Baltimore and Ohio Railroad
Company, he became the first
victim of this attempted
insurrection.

This boulder is erected by
the United Daughters of the
Confederacy and the Sons of
Confederate Veterans as a
memorial to Heyward Shepherd,
exemplifying the character and
faithfulness of thousands of
Negros who under many
temptations throughout
subsequent years of war. So
conducted themselves that
no stain was left upon a record
which is the peculiar heritage
of the American people, and an
everlasting tribute to the best
in both races.

Since 1931, the Heyward Shepherd memorial has sparked contentious debates over Civil War memory and the history of race in America. In 1995, the National Park Service erected an accompanying plaque to provide another perspective.4 It includes civil rights leader W.E.B. DuBois's original response to the monument, words that are also on the NAACP Tablet in Harpers Ferry:

Here
John Brown
aimed at human slavery
a blow
that woke a guilty nation.
With him fought
seven slaves and sons of slaves.
Over his crucified corpse
marched 200,000 Black soldiers
and 4,000,000 freedmen
singing
'John Brown's body lies a moldering in the grave
but his soul goes marching on!'

In the mid 19th-century, John Brown gained a national reputation as an abolitionist and had planned to capture the United States Armory and Arsenal at Harpers Ferry. Brown believed that his actions would encourage an uprising of enslaved African Americans who would join him, and together they would create a well-armed community of free people in the hills of Appalachia whose presence would serve as a beacon of freedom for enslaved African Americans. Brown chose Appalachia for tactical reasons, believing that slaves who would abandon their masters and join them in defending their hidden and easily defended mountain community from would be slave-catchers and white militiamen, who would face a gauntlet of fire from entrenched mountain defenders should they ever challenge Brown's community.5

On October 16, 1859, Brown and his men easily captured the federal arsenal. However, his men were soon trapped at the arsenal by federal troops and Brown surrendered. Brown was executed on December 2, 1859. Heyward Shepherd, a free African American working for B&O Railroad, was the first to be killed during the raid but was not actively engaged in supporting or attempting to thwart Brown's rebellion. In the following decades, Shepherd's death was used to perpetuate the faithful slave myth and counter Northern interpretations of slavery, sentiments which culminated in the Heyward Shepherd Memorial in Harpers Ferry.6 In the words of anthropologist Paul Shackel: "Public memory is more a reflection of present political and social relations than a true reconstruction of the past."7