The Washington D.C. temple was the 16th temple constructed by the LDS/Mormon church in 1974, and the first fully operational temple established east of the Mississippi River since the construction the Nauvoo, Illinois temple back in 1846. When the temple was open for an open house, over 700,000 people attended, including many domestic and foreign dignitaries. The location by the DC Beltway has made the temple a DC landmark loved by residents and nonresidents. Every year from Dec. 2-January 1, the church holds a festival of lights at the temple that includes a nativity scene, music and a guest speaker. Located on temple grounds there is a visitor center for everyone to enter and learn more about the LDS church and the temple.

Aerial view of temple, courtesy of RegImage (reproduced under Fair Use) 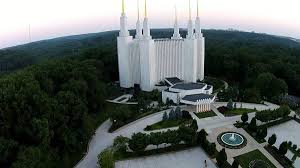 The temple as seen on the Beltway by IFCAR, Wikimedia Commons (CC0) 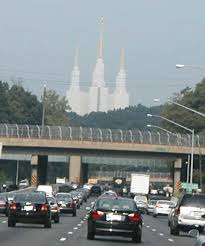 Inside Celestial Room of the temple (reproduced under Fair Use) 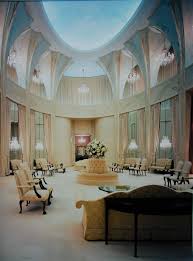 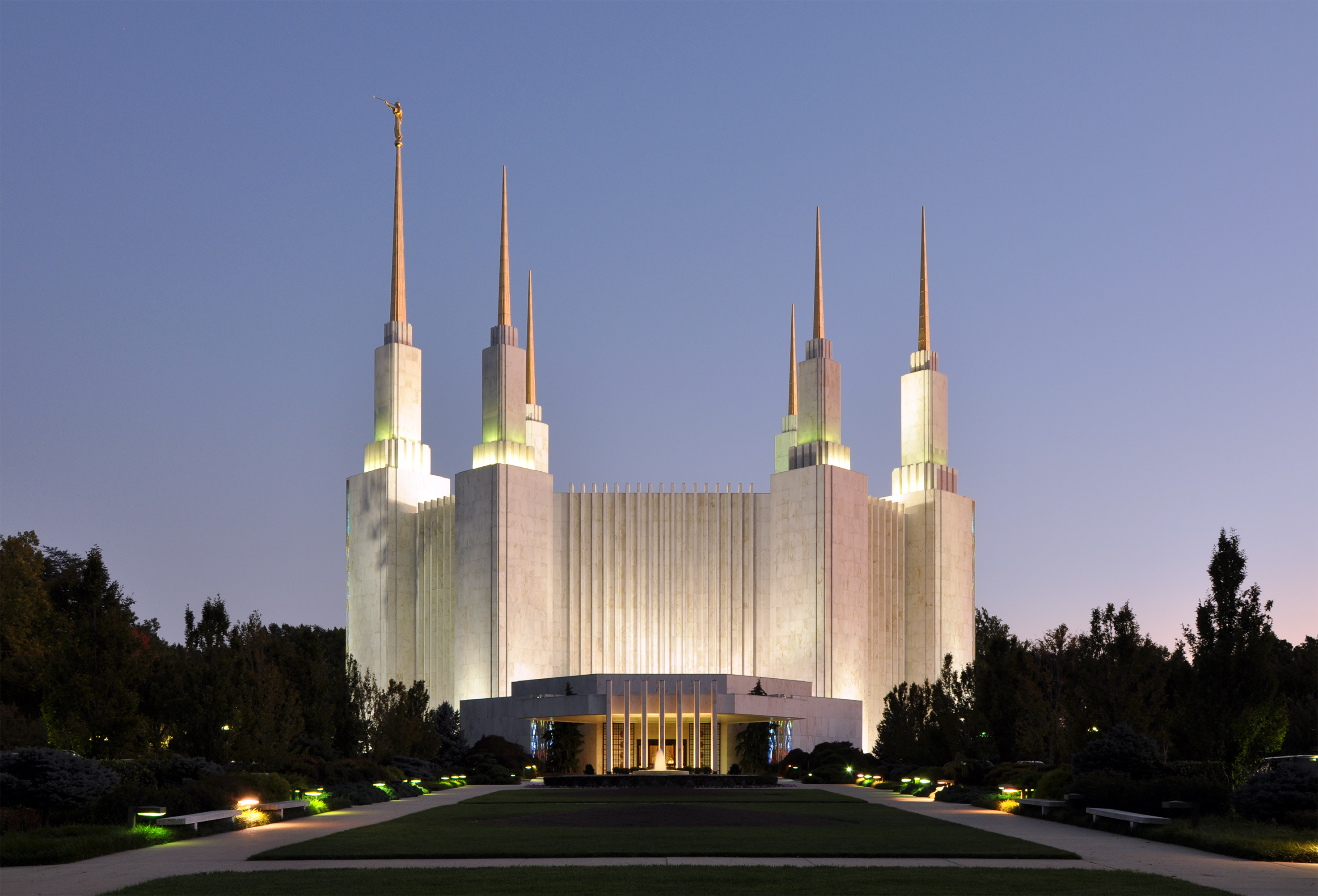 Model of interior of temple by Epachamo, Wikimedia Commons (CC0) 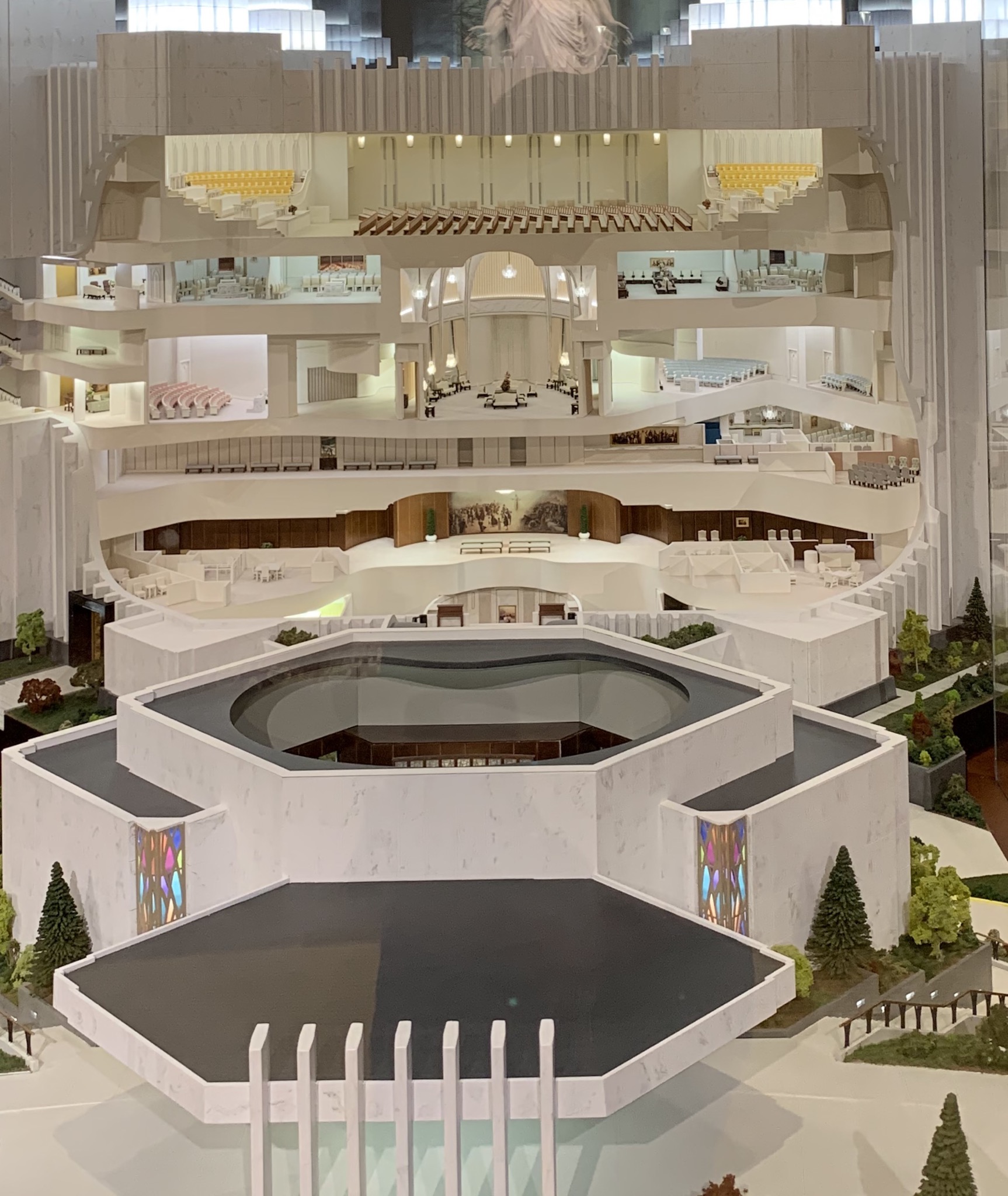 Plans to build the temple were announced on November 15, 1968; a groundbreaking ceremony was held on December 7. Clearing of the land started May 28, 1971. The site chosen for the temple was a 57-acre (23 ha) wooded hill purchased in 1962 just north of the Capital Beltway (Interstate 495). Only 11 acres of the site was cleared to give the area a more remote feeling. It was the first LDS temple since 1846 in the United States east of the Mississippi River and remained the only LDS temple in eastern North America until the dedication of the Atlanta Georgia Temple in 1983.

At the time of the temple's completion, its district included all Latter-day Saint members in 31 U.S. states and the District of Columbia, seven Canadian provinces, Cuba, Haiti, Puerto Rico, the Bahamas, and the Dominican Republic. Original cost estimates for the temple were about $15 million. Members of the church within the temple's attendance district were asked to contribute at least $4.5 million. Eventually, local members donated around $6 million for the temple's construction.

At a completion ceremony the church's First Presidency buried a metal box with historical items near a corner of the temple. During the first week of the temple open house, government officials and diplomats from around the world were taken on special tours through the temple. The open house continued for seven weeks and over 750,000 people went through the temple. The high number of people that attended the open house was attributed to the large amount of coverage that the temple and church received as the temple neared completion. Articles about the temple were printed in Time, Newsweek, and U.S. New & World Report. There was also a large press conference held that introduced the temple and church President Spencer W. Kimball. Demand for tickets to the open house was high and the tickets were gone before the first day of tours; times were extended to accommodate more people. Ten dedicatory sessions were held for the Washington D.C. Temple between November 19 and 22, 1974. Over 40,000 members attended the dedicatory services.

During the 5.8 magnitude 2011 Virginia Earthquake on August 23, 2011, the temple sustained minor damage to some parts of the exterior. The tops of four spires were knocked off and fell to the ground, as were several pieces of marble from the building's facade. No significant damage was reported to the temple's interior or to the neighboring visitor center. Repairs were made beginning in September of that year and no disruptions occurred in the temple's normal operating schedule.

The Washington D.C. Temple, designed by architect Keith W. Wicox, was built with a modern six-spire design based on the design of the Salt Lake Temple, with the three towers to the east representing the Melchizedek priesthood, and the three towers to the west representing the Aaronic Priesthood. The temple was designed to be similar in style and form to the Salt Lake Temple so that it would be easily recognized as a temple of the LDS Church. The central eastern tower reaches a height of 288 feet, the tallest of any LDS Church temple. The temple has a total floor area of 160,000 square feet, making it the third-largest church temple. The temple includes six ordinance rooms and fourteen sealing rooms. The Washington D.C. Temple's angel Moroni statue, which sits atop the tallest tower, is 18 feet (5.5 m) tall and weighs 2 tons. The outer walls are covered in white Alabama marble and the spires are coated in 24-carat gold. There are two large stained glass windows on the eastern and western-most spires. Although there appear to be no other windows, the marble was shaved to 0.625 inches thick over window openings, thin enough to be translucent.

The temple is located in the suburban area Kensington, MD , north of Washington, D.C. It is accessible mainly from the Capital Beltway (Interstate 495) exit 33, but also via the Red Line of the Washington Metro through a limited free shuttle service to and from the Forest Glen station. The look and white color of the Washington D.C. Temple, coupled with its location near the Capital Beltway has made it a local landmark. D.C.-area traffic reports often refer to the "Mormon temple" or "the temple".

Sometime after the temple was constructed, an unknown person painted "Surrender Dorothy" on the girders of a railroad bridge that crosses the Beltway; to drivers approaching the temple from the east, the words appeared like a caption under the building. The Maryland State Police removed the message, which has been repainted from time to time. LDS newsletters have cited the graffiti as an example of misconceptions about their religion, although local Mormons generally find the re-appearing inscription amusing rather than offensive.

On October 22, 1986, a gunman forced his way into the temple and held people within hostage for a few hours before escaping. He was later caught and 1988 was found guilty for assault and false imprisonment but not criminally responsible due to insanity.

Since 1978 the temple has annually hosted the Festival of Lights at the visitors' center, officially running from December 2 to January 1. The event attracts thousands of visitors who come to view millions of lights on the temple grounds. The festival features live performances by the Mormon Choir of Washington, D.C.; a public lighting ceremony; a narrated outdoor nativity scene; and nightly performances from various regional artists and musicians. Each year, a different ambassador to the United States is invited as a guest speaker at the festival's opening lighting ceremony. For example, in 2011, J.W. "Bill" Marriott, Jr. and his wife, Donna, hosted Brazilian Ambassador to the United States Mauro Vieira, with L. Tom Perry of the Quorum of the Twelve Apostles presiding.