Located 2 miles north of the town of Tendoy, Fort Lemhi was created in 1858 as members of the LDS/Mormon church came and settled this area of Idaho. The settlement was located among the lands of the Shoshonee and Bannock Indians, with whom the members of the LDS church had come into friendly terms and a type of alliance. The settlement was for farming and stick raising, the latter, used for locals, the Indian tribes and people heading to Oregon. The Mormons abandoned the fort in 1858 during the "Utah War" along with the rise in prices for the US Army causing financial angst and the tribes they were friendly with retaliated when it was learned the church was also trading with the tribe's enemy-the Nez Perce. A few Mormons were killed. In 1862 miners took charge of the fort for a time. The name, originally "Limhi" comes from the Book of Mormon: Limhi was a king of a part of the Nephite people held under bondage to the Nephite antagonists, the Lamanites. Limhi later left with his people on a 22-day trek to find the rest of the Nephite people after escaping the Lamanites. The fort, or what remains, can still be seen today.

Historical Plaque adjacent to a remnant of an adobe wall 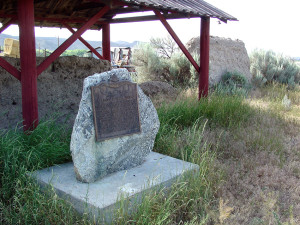 Another portion of an adobe wall 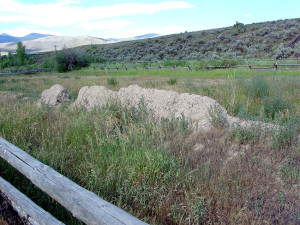 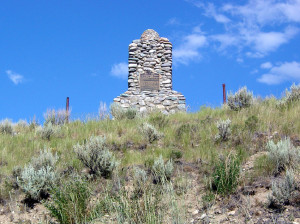 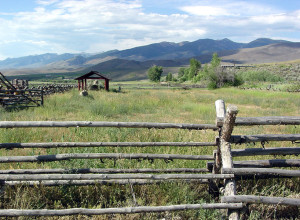 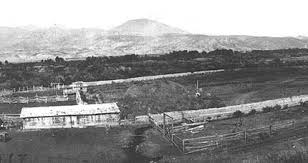 Sign for fort site off road near fort's remains. 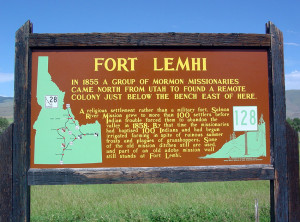 "During the short period of 1855-1858, President Brigham Young sent a small number of men to establish a settlement some 400 miles north of Salt Lake City. Moreover, they were to preach to “remnants of the House of Jacob” who already inhabited the area. The small fort and crude dwellings came to be known as Fort Limhi, named after a king in the Book of Mormon.

The name was later changed to Fort Lemhi. The county in which the fort was situated and a branch of the Salmon River also adopted the name Lemhi as did a nearby mountain pass through which Lewis and Clark crossed the Continental Divide.

The settlers faced monumental challenges while building the fort and trying to make a living off the land. Hauling trees, clearing the land, insects and conflicts with Native Americans were constant challenges. The site was abandoned in early 1858. Little remains today of what was once Fort Lemhi. Small sections of an adobe wall survive from that day, but little else."