Lolo Pass is a trail that crosses the Bitterroot Range of the Rocky Mountains between Montana and Idaho. A National Historic Landmark and also listed on the National Register of Historic Places, it was here in September 1805 that the Lewis and Clark Expedition traveled westward on their journey towards the Pacific Ocean. Their successful completion of this part of their journey generated widespread acclaim more than any other portion of the expedition. A newly-remodeled visitor's center was completed in 2003 that includes interpretive exhibits about the Lewis and Clark Expedition as well as the Nez Perce. ﻿﻿The pass received notoriety once again during the Nez Perce War of 1877. Nez Perce chiefs, including Chief Joseph, led their tribe, which included cattle, across the pass from Idaho into Montana territory trying to escape the U.S. Army, which had been attempting to forcefully remove the Nez Perce out of their traditional homeland. The tribe and army fought a battle not long after on August 9-10 and both sides suffered casualties, though it was worse for the Nez Perce who suffered from 70-90 deaths while the army lost 31 soldiers. The tribe continued to head northwards towards Canada before surrendering in September. The Nez Perce were the last major tribe to be driven from their land by the U.S. government. Chief Joseph led the tribe in the decision to move peaceably from their ancestral lands in Wallowa County in present-day Oregon to the Lapwai Reservation in present-day Idaho. On the eve of their scheduled departure twenty of their youth avenged the wrongful deaths of their brethren and killed about twenty settlers. The seven hundred fifty member tribe, two hundred of which were warriors, embarked on a 1,200 mile journey to find refuge while fleeing the pursuing U.S. Army. At the Battle of White Bird Creek a civilian with the U.S. Army shot and killed a Nez Perce representative carrying a truce flag. At the Battle of the Clearwater, about one hundred fifty Nez Perce held back General Howard’s forces while the rest of the tribe slipped past and began their journey on the Lolo Trail. When the Nez Perce reached their allies, the Crows, on their reservation in present-day Yellowstone National Park, the Crows refused them refuge, fearful of consequences from the U.S. government. The Nez Perce then fled toward refuge in Canada until the U.S. Army converged upon them forty miles from the border at the Battle of Bear Paw. There, the Nez Perce surrendered. The Nez Perce traveled the Lolo Trail to reach their Crow allies in Yellowstone National Park. The Nez Perce traversed about one hundred of the Lolo Trail, which partially follows present-day U.S. Highway 12. The Nez Perce historically used the Lolo Trial to hunt buffalo, which allowed them to fair significantly better than the soldiers that pursued them. The U.S. Army crossed the mountains to the Salmon River where they found the river impassable. In response, they traded for packhorses and hired a Native American guide to lead them across the mountains. The soldiers, tired, ill-fed, and repeatedly beaten by the Nez Perce, struggled in the early snow along steep ridges. The Nez Perce and U.S. Army trod upon the pass that the Lewis and Clark party crossed on September 15, 1805. Although the Nez Perce caused many solider fatalities through self-defense, they sought to live in peace with their Crow allies; the Nez Perce hadn’t strayed from the Lewis and Clark expedition’s description—a peaceful tribe with strategic warriors. Visitors can retrace the route that the Nez Perce took over the Bitterroot Mountains in 1877 on U.S. Highway 12 or on a primitive dirt road known as the Lolo Motorway (Forest Road 500).

The pass is the highest point on the Lolo Trail (5,233 ft), which had been long used by the Nez Perce people. 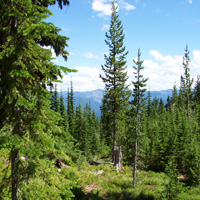 Chief Joseph, a Nez Perce chief who acted as guardian of the camp and spokesperson 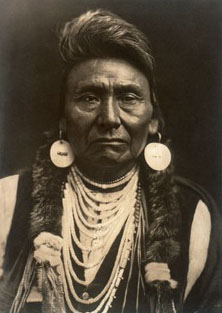 A party of Nez Perce warriors

A visitor center and ranger station is located at the site. Visitors can learn about the expedition as well as the Nez Perce War of 1877. 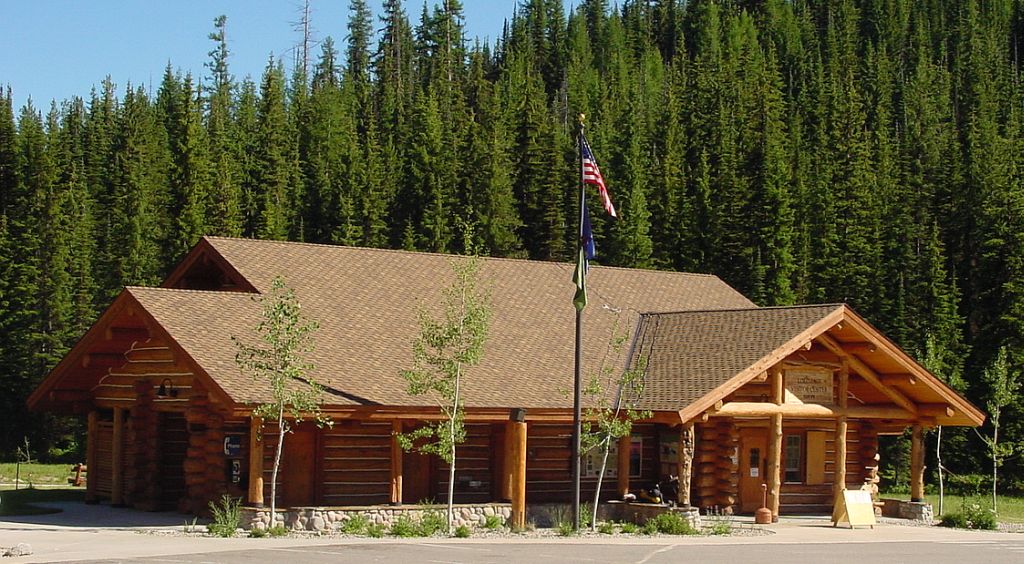 A Concise History of the Nez Perce War

Competition for land between incoming settlers and the Nez Perce led to in the Nez Perce War of 1877. The Nez Perce were known as a peaceful tribe with strategic warriors and as breeders of the Appaloosa horse. The Nez Perce originally occupied about 17 million acres spanning present-day Washington, Oregon, and Idaho. As the white settlers flocked to the Pacific Northwest pursuing land and later gold, the Nez Perce faced increasing pressure from the settlers and the United States government to relocate from their ancestral lands and lifestyles. In 1855, Old Chief Joseph, the revered father of (Young) Chief Joseph, helped the United States government create a treaty giving all of the Wallowa Country to the Nez Perce.

After more gold was discovered there another treaty took ninety percent, six million acres, of Nez Perce land away eight years later in 1863. Feeling betrayed, Old Chief Joseph denounced the United States, burned his American flag and Bible, and refused to sign the second treaty unlike many other Nez Perce bands. Those who ratified the treaty relocated to the Lapwai Reservation in Idaho Territory. The United States government held all Nez Perce to the treaty, although only one-third of the Nez Perce chiefs signed it.

In 1873, President Ulysses S. Grant issued an Executive Order that divided the land of the Wallowa Country into homestead sites and an Indian reservation. Caving to pressure from white settlers, President Grant revoked part of the order protecting some of the valley for the Nez Perce, essentially opening it all to settlers and closing it partially to the Nez Perce. The revised order set aside part of the valley for settlers by prohibiting the Nez Perce’s presence there, but through lack of enforcement allowed settlers to trespass onto the Nez Perce’s land.  As many as thirty Nez Perce died at the hands of settlers during the 1860’s and 70’s; yet few of those accused were ever brought to trial and even so, none were found guilty for their crimes.

The tension reached a boiling point when two settlers accused the Nez Perce of stealing horses and shot one of Young Chief Joseph’s close friends, Wind Blowing; the horses were later found on the settler’s own property. Fearing the Nez Perce’s retaliation, the settlers of the Wallowa Country demanded government intervention. Major Henry Clay Wood held a council at Fort Lapwai to resolve the situation and promised the Nez Perce representatives that the settlers who killed Wind Blowing would be held accountable to the law. However, the men walked free despite Major Wood and General Howard’s best efforts.

In May 1877, the United States government ordered the Wallowa band of Nez Perce to leave under an 1863 treaty, which Old Chief Joseph never signed. They were allowed thirty days to gather their cattle and two thousand horses and move from Wallowa County to resettle in Lapwai, Idaho. After Federal officials ignored Young Chief Joseph’s pleas for the Nez Perce people, the tribe met the deadline. With approximately 750 Nez Perce—500 of which were women, children, and elderly—Chief Joseph embarked on a prolonged battle that spanned three states and 1,200 miles with over 2,000 soldiers involved.

Originally, the Nez Perce chiefs made the difficult decision to relocate to the Lapwai Reservation to preserve the Nez Perce to posterity. However, on the eve of their departure, twenty of the bands’ youth avenged the wrongful deaths of their brethren by killing about twenty settlers. Left with few choices, the Nez Perce began to flee and fight. At the Battle of White Bird Creek a civilian accompanying the U.S. Army under General Howard shot and killed a Nez Perce representative waving a truce flag. Betrayed and threatened, the Nez Perce strategically attacked the numerically superior U.S. Army at White Bird Creek on June 17, 1877, inflicting heavy causalities and suffering only a handful. The Nez Perce battled their way to Yellowstone National Park to find refuge with their allies the Crows. Afraid of the U.S. Army’s potential retaliation for sheltering the Nez Perce, the Crows turned them away. The Nez Perce then fled wholeheartedly to Canada, as Sitting Bull had before them. At the Battle of Bear Paw, forty miles from projected freedom in Canada, the Nez Perce’s epic journey ended after a five-day battle and siege. Chief Joseph delivered his famous words “I Will Fight No More Forever” and made a treaty with General Miles permitting the Nez Perce people to relocate to the Lapwai Reservation in Idaho, as was originally intended.

However, the United States government failed to recognize the treaty forged between Chief Joseph and General Miles, instead sending the Nez Perce to reservations in Kansas and later Oklahoma before eventually allowing them to return to the Pacific Northwest. The Nez Perce’s journey was not made in vain. Their epic struggle was well documented in the newspapers and garnered public sympathy for the Native Americans’ cause. Chief Joseph, called “the Red Napoleon” although he was not the Nez Perce’s military strategist or war chief, became a political advocate and spoke in Washington, D.C., on behalf of the Native American’s plight. Four thousand Nez Perce live on reservations in the Pacific Northwest today, continuing the legacy of the historic Nez Perce.