The Barnstable County Courthouse in Barnstable, Massachusetts was first built in 1831. The designer of this landmark was Alexander Paris, a prominent American architect-engineer. It was first listed on the national register of historic places in 1981. It has been expanded 5 times between 1879 and 1971. It is still today being used as a courthouse. It is built mostly out of Quincy Granite but the front porch and grooved Doric columnns are made of wood that’s designed to look like stone. In 1906 a second level was added. 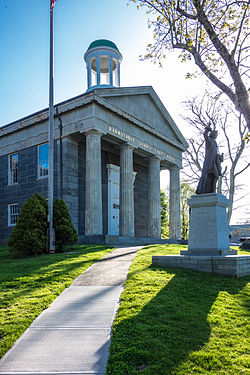 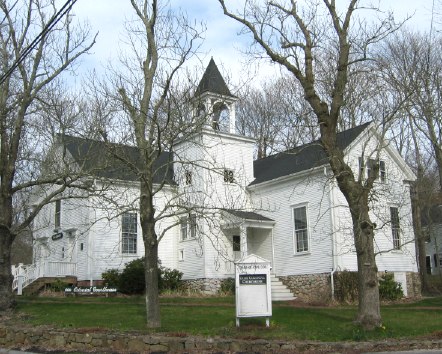 Old Colonial Courthouse functioned as the Barnstable County Courthouse until completed in 1834. The Old Colonial was built between 1763 and 1774. The only use of the courthouse was for court sessions and the legal records were kept in the County house. Unfortunately little is known of the courthouse due to the fact that on October 22nd, 1827 the County House had a fire which destroyed almost everything. The only records that were available were the ones that indicated when Old Colonial was built and when the idea of building a new courthouse came to be.

Barnstable is located on the "bicep" of the Cape Cod arm. It is bordered by Cape Cod Bay on the north, Nantucket Sound on the south, Sandwich and Mashpee on the west and Yarmouth on the east. The surrounding counties of this Barnstable are Plymouth County, to the northwest, and Dukes County to the south. Barnstable County is known for the name of Cape Cod which was first applied in 1602. The Mayflower first landed in this county but today is known as Provincetown. Fisherman made regular stops here until the arrival of Pilgrims increased and settlements were started which not long after that came the founding of the Plymouth Colony.

The seven villages of Barnstable each had their own character, brought up from their early histories. Cotuit is a village famed for Cotuit Oysters, a business started in 1857 by Captain William Childs, his son and two sons-in-law, to grow oysters in the purity and chemical content of Cotuit waters. Marstons Mills is named after Ben Marston who, in 1738, took over the first fulling mill in America from Thomas Macy, the man who built it. Osterville, surrounded by water, is home to the Crosby boat yards and has become a residential area and a specialty shopping center. Centerville is home to the great beaches that curve around Centerville Harbor and to Wequaquet Lake, the largest inland body of water on Cape Cod. It is also home to the Eastern College Athletic Conference, diagonally across South Main Street from the famous Four Seas Ice Cream parlor, now in its 63rd year.