The museum strives to serve the community as a cultural institution that offers art and cultural education. Operating since 1874, the museum contains a robust collection of art pieces of various mediums. Their programs range from those that cater to children to those that would interest adults. The Dubuque Museum of Art was accredited by the American Alliance of Museums in 2005.

The Dubuque Museum of Art 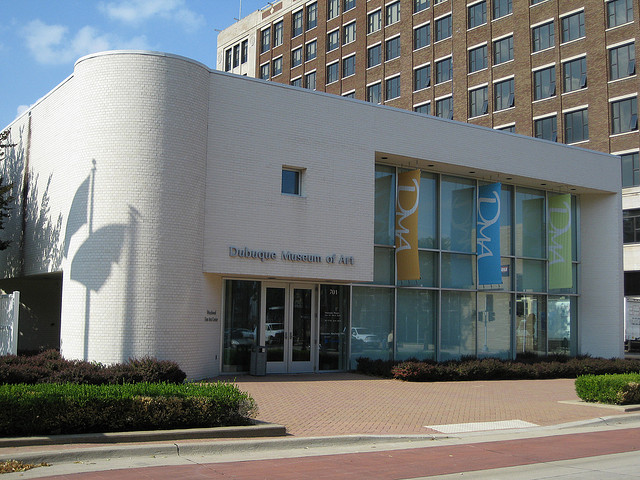 Soon after its establishment, membership of the association was opened to the general public. Members paid a subscriber's fee to the association. The funds made from subscription fees were then used by the association to purchase and display new art pieces for all to enjoy. These exhibitions helped the association gain more interest, which in turn allowed them to fund more art purchases and expand the scope of the organization.

The Dubuque Art Association has evolved over the course of its history. As membership and acquisition of art work grew, the group changed permanent locations several times. Originally, they would meet in private homes, until the organization grew so large that this was no longer sufficient. Starting in 1904, the association had to find a more satisfactory home. The association cycled through a few different notable Dubuque locations, such as the Carnegie-Stout Public Library and the Old County Jail. It wasn't until 1999 that a permanent home was found at 701 Locust Street.

In 1996, the Association was renamed to its modern name, the Dubuque Museum of Art. The collections that have been acquired throughout the years now number around 2,200 distinct art pieces. One of the museum's claims to fame is its substantial collection of art by Grant Wood, one of the largest such collections in the world. Additionally, many works by Arthur Geisert can be found displayed in the museum. While the museum boasts an impressive collection of art, its various programs and outreaches are also commendable. The museum offers programs that include art classes for both children and adults as well as educational lectures. Furthermore, they offer many opportunities to view temporary and permanent exhibitions that showcase the collections of the Dubuque Museum of Art.