James E. Mann, (Issac T. Mann’s cousin) formed the Bank of Bramwell in 1888. The Bank was incorporated on February 25, 1889, and began business on May 1, 1889. J.H. Bramwell served as the president of the Bank of Bramwell, while I.T. Mann was the cashier. Issac T. Mann served as the bank’s last president. Mann lived in the apartment upstairs while the bank was operating, and for a while after the bank closed its doors. The bank expanded tremendously, by 1894 it had increased its capital to $100,000 and issued a 100% stock dividend. The bank continued to thrive until 1919; profits began to reach “astronomical heights for such a small bank.” The Bramwell Bank gained fame and notoriety when it “floated the largest Liberty Bond during World War I.” This resulted “in the commonly used 1920s phrase ‘solid as the Bank of Bramwell’. That year the profits were $164,000 and the bank paid out “dividends totaling $66,000.

This is the front door steps to the Bank of Bramwell. 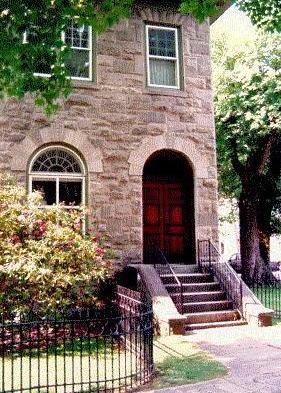 This is a view of the Bank of Bramwell building. 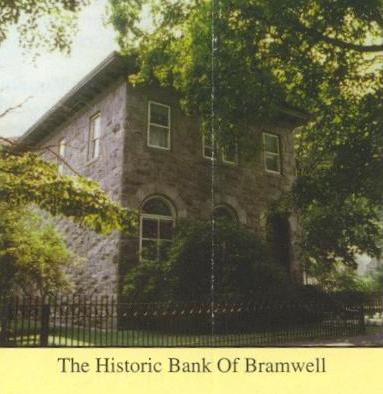 After the Bank of Bramwell was established it quickly became one of the leading financial institutions in the region. The bank was located one block from the railroad station and financed many local and regional businesses during an era of rapid economic growth in this part of West Virginia. The bank financed projects far from the coal fields, including two projects in Washington D.C., the Burning Tree Country Club and the National Woman’s Golf Club. During World War I, the first Liberty Bonds that were sold in the region were sold at the Bank of Bramwell.

Over the next ten years, bank profits remained high. However, in 1931 the Great Depression took its toll on the bank and area businesses. This was I.T. Mann’s last years as the Bank of Bramwell’s president, as he died in 1932. Harry Bowen took over the role of the bank’s president, but nothing could be done because the “bank was sinking fast.” In 1933, the bank suffered severe losses. The bank directors realized the bank was in trouble and began liquidation procedures.

The Great Depression of the 1930s ended an era characterized by large business deals and the arrival of many millionaires being made in Bramwell. With the coal industry growing, independent operators were forced to sell out or to merge with large corporations. With the national depression, the Bank of Bramwell was forced to close its doors. Since the bank closed, and the depression was taking its toll on the economy, many families moved away from Bramwell. This was the unfortunate end of an era of growth in Bramwell.