Built during the Second Seminole War in April of 1836, Fort Cooper was built by Major Mark Anthony Cooper to protect the sick and wounded of General Winfield Scott's force, which continued its march towards Tampa. Cooper commanded four hundred men of the First Georgia Battalion Volunteers. The fort was attacked several times, the largest of which is believed to have consisted of over five hundred Seminole warriors. For 16 days, Cooper and his men held off the Seminoles as they awaited a relief force which was supposed to have arrived 9 days in. Afterwards, the fort was used as a reconnaissance, dispatch and observation post until 1842. Nothing remains of the original fort, though there is a partially reconstructed log wall.

The site of Fort Cooper with the partially reconstructed wall in the background. 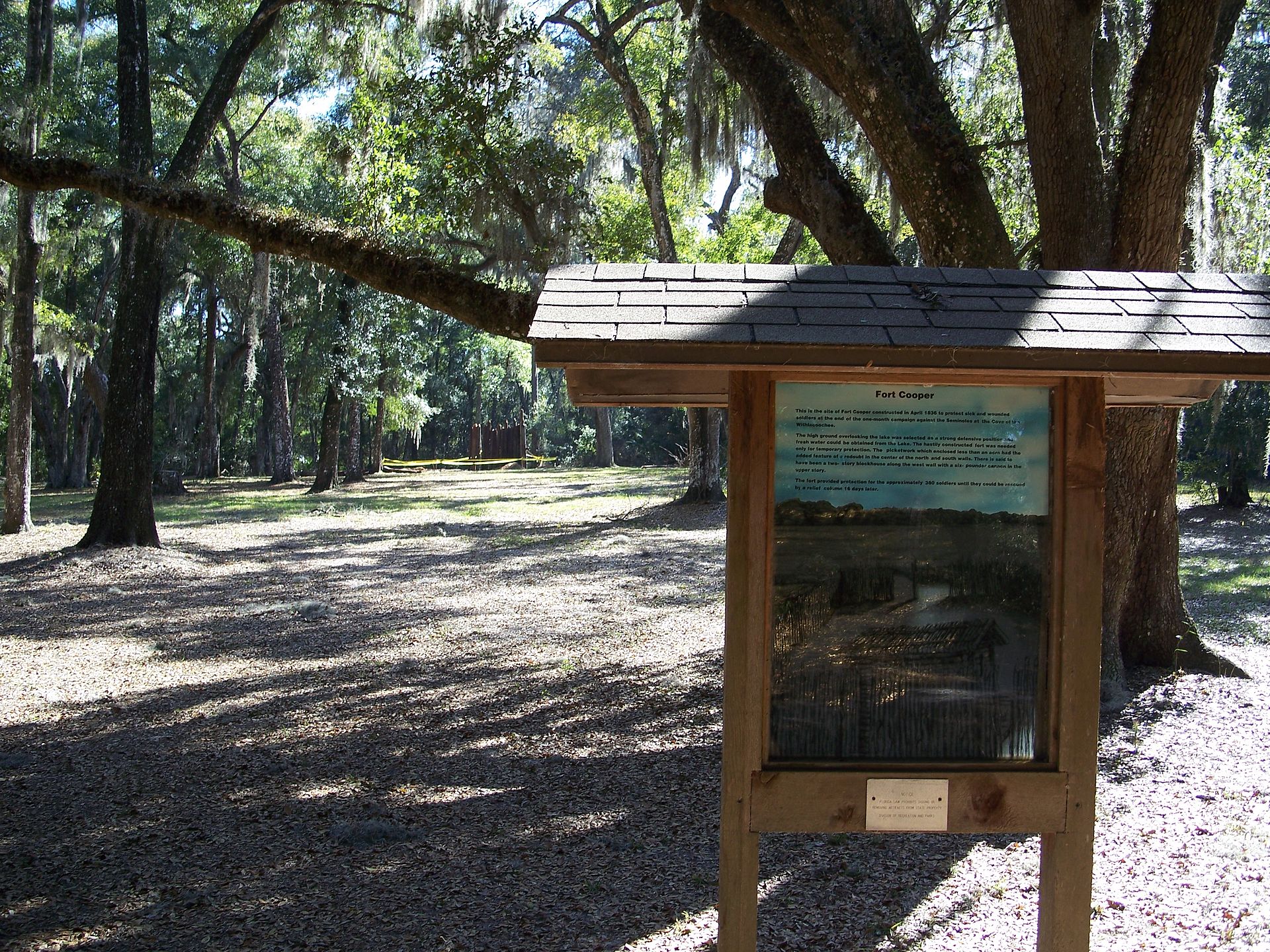 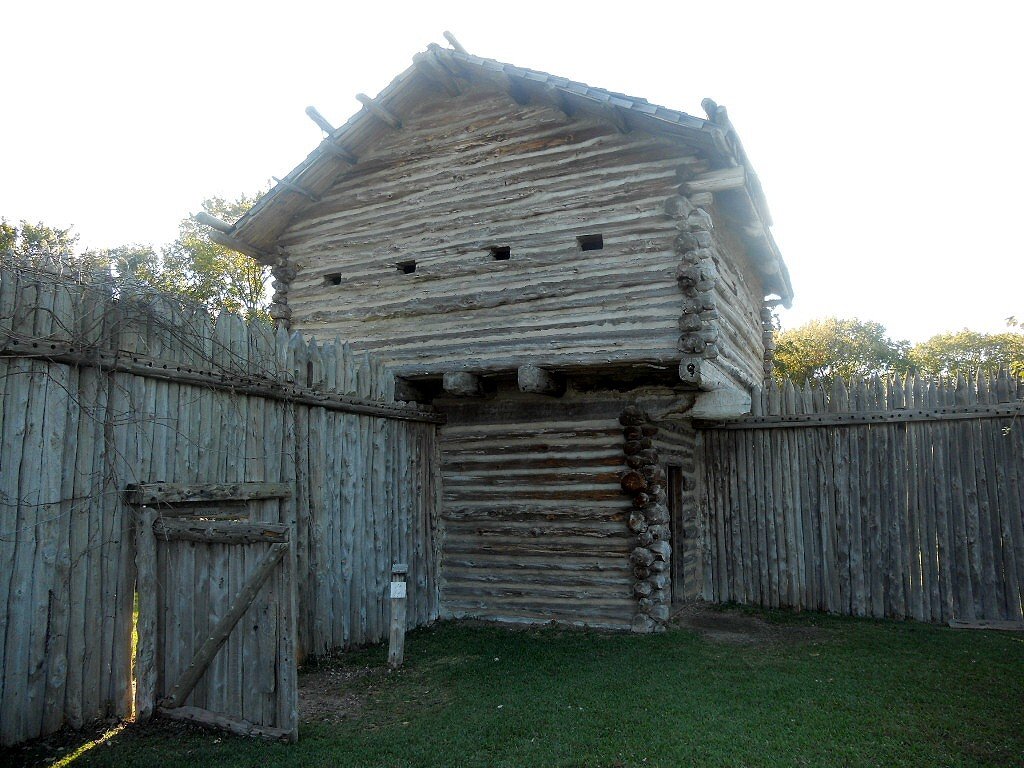 Reenactment of the siege.

In 1836, during an attack on a Seminole stronghold, the Cove of the Withlacoochee, the forces under the command of General Edmund P. Gaines, attacked the Cove but found themselves unable to cross the Withlacoochee due to gunfire from the Seminoles. The Seminoles managed to hold off the forces of Gaines for over a week. Gaines eventually had to request reinforcements while his current forces continued engaging the Seminoles. They soon ran out of supplies as they had only received a week's worth of rations from Fort Drane just prior to the attack.Gaines and his men would be forced to eat their horses, mules, and dogs in order to stay alive. Gaines' reinforcements arrived soon thereafter and together they were able to defeat the Seminole forces.

Due to the Seminoles' ability to hold back Gaines' force of around a thousand soldiers, General Winfield Scott came up with a bold plan to attack the Cove of Withlacoochee and surround the Seminoles. Scott ordered five thousand troops into three separate columns and from there they would maneuver to attack the Seminoles from three different directions. The columns would all be delayed, which would lead to all of them arriving at different times. Two of the columns arrived on March 28th, while the 3rd arrived on March 30th. On March 29th, the present forces crossed the Withlacoochee and found that the villages in the Cove had been deserted.

It would be General Scott's decision that their army could move fast without their sick and wounded marching with them. Scott ordered Major Anthony Cooper to remain behind while he and his men marched towards Fort Brooke, in modern-day Tampa, Cooper. along with 5 companies and a small artillery battery from the First Georgia Battalion of Volunteers and additional army regulars, began fortifying their position to protect the sick and wounded. Cooper and his men built a wooden palisade fort on the western shore of Lake Holathlikaha on the western edge of the Cove. It was built on a rise that overlooked the lake as protection against a Seminole attack. Cooper was told he would have to wait an estimated nine days before reinforcements would arrive to relieve them.

About three days into their wait, they were discovered, and soon after, attacked by Seminole warriors led by the War Chief Osceola. The defenders would be surrounded by the Seminole war party and attacked multiple times a day for 16 days. The Seminoles attempted at least one major attack on the fort, by sending five hundred warriors, but this attack was halted and pushed back. After the two week long wait, the defenders, with supplies running low, were reinforced by a support column on April 18th.

It was because of Major Cooper's leadership and constant vigilance that out of the small force of around four hundred men, only 20 were wounded and 1 killed. The location of Fort Cooper, and the ability of the U.S. soldiers to enter the Cove of Withlacoochee, was enough to convince Osceola, and other Seminole leaders, that the Cove was no longer a safe haven for them. They moved the entire population of Seminoles from inside the Cove, further South during the Second Seminole War. From that time on, until 1842. Fort Cooper would go on to be used as a reconnaissance, observation, and dispatch fort by multiple detachments of the U.S. Army.

The Fort's location was strategic and well placed. It's location along the western bluff of Lake Holathlikaha on the western part of the Cove, made it so the Fort would be huddled against the border of a hardwood hammock, while still maintaining access to a supply road that was covered by longleaf yellow pine.

Every year in March, the park holds reenactments of Major Cooper's defense of the fort against the Seminoles. Today the park is home to many different activities and other attractions centered around the fort’s history. The park has a basic camp grounds that can hold groups up to 20 people. Tourists can play classic games like volleyball and horseshoes in the main park and there is also a playground available for children. The hardwood hammock that was a strategic position for the fort, is now used as a picnic area. During the month of March, the park holds large reenactments of what is believed to have happened during the battle many years ago.

Sunrise to sunset year round