This 1913 building was constructed by the LDS/Mormon church to serve as a place of higher education for the local church members. In 1924 the church leased the building to newly state-established Union High School, officially closing the Stake Academy. After a number of years the building was no longer used and a plan was set in place to demolish it. However, it was later proposed to turn it into a city library and approved. Renovations continue to this day.

Snowflake Academy in 1913 after it was completed 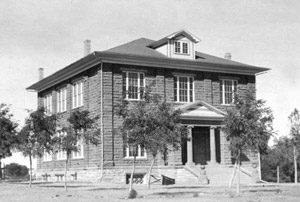 As the building looks today 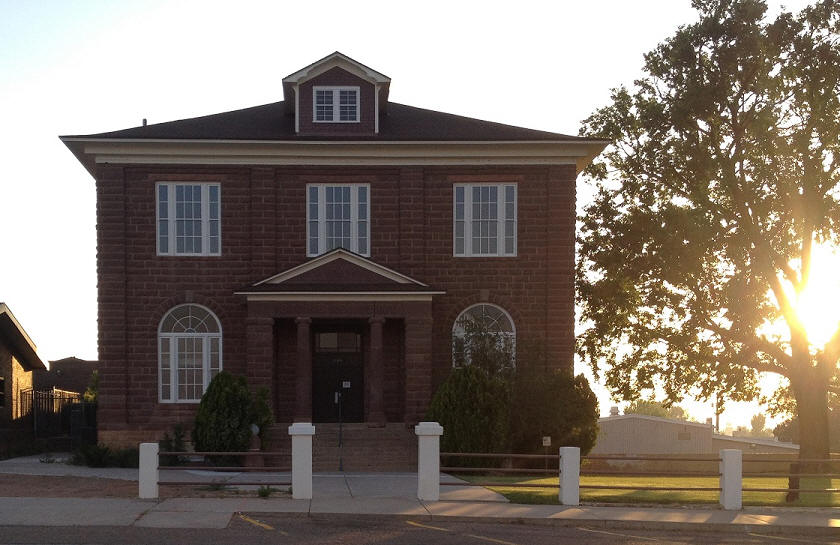 "Snowflake, Arizona was settled in 1878 by William J. Flake under the direction of the First Presidency of The Church of Jesus Christ of Latter-day Saints. The early pioneers to the area were convinced of the benefit of education to the successful establishment and permanence of a community. As early as the spring of 1879 an elementary school was formed in the area.

In 1888 Wilford Woodruff, President of The Church of Jesus Christ of Latter-day Saints and President of the Board of Education for the Church, wrote to Snowflake LDS Church leadership in regard to establishing an Academy for higher education. The local Church leadership approved the request, and a charter was established to create the Snowflake Stake Academy. The Academy met in various buildings until it was decided that a larger building, dedicated solely for the purpose of education, be constructed.

It was a considerable task to finance the building of the Academy. The citizens of the Snowflake Stake were asked to pay $2,000 toward the academy, to be carried out by an assessment to each ward in the local stake. Citizens were asked to donate to this cause. The Church in Salt Lake City appropriated $1,000 to finish the building, which opened for classes in September 1901, with Joseph Peterson as principal.

In 1908 the headquarters of the Church in Salt Lake City sent $1,000 to help build an addition to the original structure. Each community in the Snowflake Stake was again assessed a contribution amount. The building was completed and dedicated in August 1910 by Elder George F. Richards, a member of the Quorum of the Twelve Apostles. The eventual cost of the entire building with additions was approximately $24,000. Tragedy struck early Thanksgiving morning of 1910 when a devastating fire destroyed the building. There was no insurance to cover the loss.

On December 10, 1910, local Church authorities met and decided to rebuild the Academy. The Church in Salt Lake City pledged to $1,000 for every $1,000 raised by the local people up to $10,000. A list of donors for the both the old and new building was placed in the cornerstone of the new building on Thanksgiving Day in 1911. Donations of money and labor were pledged, and finally, on November 27, 1913, the newly built Snowflake Stake Academy building was dedicated by Joseph F. Smith, then President of The Church of Jesus Christ of Latter-day Saints.1 Community members, devoted to the Academy, established an endowment fund; alumni pledged $1 per year to help sustain it.

In 1921 the Church decided that, where a state school could be formed, it would no longer financially support the stake academy schools. In the fall of 1924, Union High School began holding classes in the Academy, which was leased to the State at a cost of $1 per year.

As the Academy aged, the school district realized the need for a more modern facility; the decision was made to tear down the old Academy and construct a new facility on the land. The town of Snowflake stepped in and purchased the entire corner lot where the Academy stands. The town council of Snowflake voted to renovate the building into a modern library while retaining the grand, historical essence of the building. Efforts to renovate and preserve the Snowflake Stake Academy continue."