Waconda Springs was known to Native Americans as a ceremonial meeting place for the tribes documented to have used the area. Waconda Springs was filled with the demolition debris from the original site during construction of Waconda Lake and Glen Elder Dam. Impounded water covered the site in the mid-1960s. 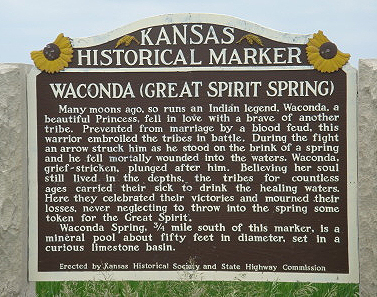 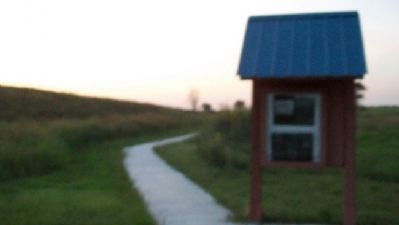 The legend of Waconda Springs is illustrated by a mural displayed on the west basement wall of the Hopewell Church. In short, the legend is a love story about the Indian Princess Waconda and her lover Takota. Forbidden to marry because they were of rival tribes, Waconda sacrificed herself following Takota's plunge into the springs after he suffered moral battle wounds. Thus the legend of the "Great Spirit Springs." This significance has its roots in the Native American culture, westward expansion during white settlement, and contemporary cultFrom the facts gathered regarding the early history of Waconda Springs, it is learned that the first white man to visit this historic spot was Sir William Johnson in the spring of 1767.

The first recorded Kansas history dealing with Waconda Springs tells of the visit by General Zebulon Pike in the year 1814. General Pike, on his trek westward visited an Indian village now known as Guide Rock. During his visit, he learned of what the Indians called the "Great Spirit Spring," a place where for generations Indians had gathered in respect of a Great Spirit. Pike altered his route and visited Waconda Springs on his way to Colorado where he discovered Pike's Peak. The last great pilgrimage of the Indians to the "Great Spirit Springs" was in the early 1870s.

The first permanent habitation at the Springs was a sod house built in 1870 by a man named Pfeifer who took out the first claim on the property through the mid 1960s.

Based on fact and legend Waconda Lake inherited its name from a prominent, historical site called Waconda Springs, which was located about half-way between Glen Elder and Cawker City, 3/4 of a mile south of old U.S. Highway 24.

The mineral springs was an interesting phenomena on the plains of north central Kansas. Its pool basin was set in a 300-foot-wide mound rising 40 feet above the surrounding Solomon  River Valley.

The spring's pool was 50 feet in diameter and 15 feet deep, although there is a myth that the pool was  bottomless. The water contained calcium, magnesium, iron, silica, sodium chloride, sulfate, and bicarbonate. Geologists thought that the mound was formed by the deposits of minerals forced up by artesian pressure in the water.

The mineral springs around which the legend evolved was once a ceremonial gathering place sacred to all the plains Indians. Later it became a health resort for the white man until Lake Waconda covered the site