A plaque at the marker with Ronald Reagan's famous line. 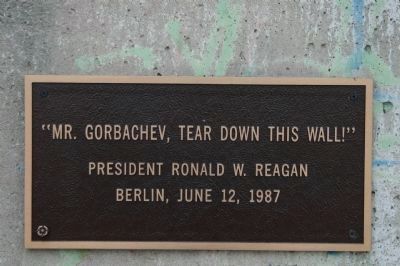 A quote from President Kennedy in Berlin 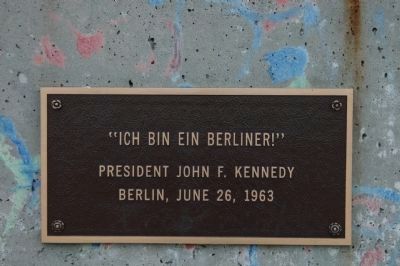 Pieces of the Berlin Wall at the site 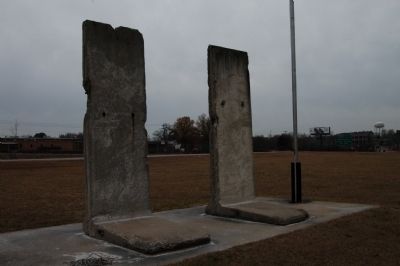 The Cold War was given its name due to the fact that, it was an ideological war that pitted the United States against the Soviet Union. No place on the planet spoke more of this than Berlin, which was divided itself into two spheres of influence in West Berlin and East Berlin. The city is the site of the famous Berlin airlift, that was implemented to prevent the citizens of West Berlin from starving years prior to the construction of the wall. Following the end of World War II and before the construction of the wall 2.7 mill citizens escaped into West Berlin. The Wall was constructed in 1961 and fell in 1987 during the years that the wall stood two United States Presidents made trips to West Berlin and gave speeches.

The Wall not only divided East and West it divided family members from others caught on the other side of the wall. The Berlin Wall was a symbol of the ideological battle between the two Rival Superpowers. The Soviet Union claimed that the wall was built to prevent corruption from the Fascist population on the other side, claiming that United States backed West German government was corrupt. While the United States point of view was look how bad Communist must be if  they have to build a wall just to keep people from leaving. The differences in the sides of the wall can be clearly seen by its remnants, the West Berlin side had graffiti on it while the East Berlin side had nothing.

President Kennedy and  President Reagan both made trips to West Berlin while the Berlin Wall stood and made speeches in the city itself. President Kennedy's trip to West Berlin was shortly after the construction of the wall. His famous line during his speech, that is depicted in this memorial to the wall is "Ich bin ein Berliner!" which in English means " I am a Berliner. Ronald Reagan's trip was near the fall of the Soviet Union, and he was clearly audible in East Berlin itself when he said "Mr. Gorbachev, tear down this wall!". Ronald Reagan Presidency wouldn't last long enough to see Soviet Union collapse, that would be during the Presidency of  George H. W. Bush. The pieces that are in this memorial to the Berlin Wall came from the people in Berlin who themselves tore down the wall, signaling the end of the Cold War.