On the west shores of the New York Harbor Narrows, Fort Wadsworth occupies 226 acres on the northern shore of Staten Island. It has guarded the entrance to New York for over 200 years with the distinction of being the fort with the longest continuous military history in the country. The fort has been through many renovations as technology improves. It is now well known for its magnificent views of the New York Harbor.

Reenactment of the Revolutionary War (Credit: Vinnie Amesse on www.visitstatenisland.com) 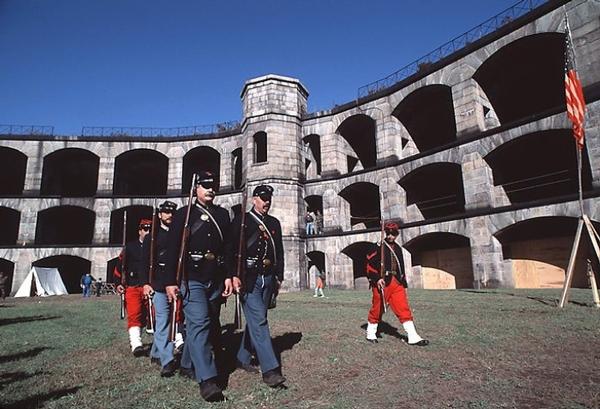 The location of the fort was first fortified by the Dutch in the 17th century. During the American Revolutionary War in the early 1800s, the British took control of the area and constructed the historic batteries that remain there to this day. When the Revolutionary War ended, the American military took over. During the War of 1812, the fort was used for defense by both the U.S. Army and the NY State Militia.

Fort Richmond, built in 1847-1862, was used during the Civil War. In 1865, the name was changed to Fort Wadsworth to honor Brevet Major General James Wadsworth, who was mortally wounded during the Battle of the Wilderness. In 1902, the entire post was named Fort Wadsworth.

The fort served it's purpose throughout the two World Wars. During the Cold War, the military posted the command center for New York's Nuclear defense system here. Due to it's isolation, it was easier to keep information secure and safe from outside hands. Today, it stands as a fort that has been through many different events through history. Other usage of the fort included: headquarters for the 52nd Anti-Aircraft (AAA) Brigade, master facility of the Nike Missile firing batteries of the NY Defenses, the U.S. Army Chaplain School, and U.S. Navy's headquarters for it's Naval Station New York.

In 1994, the fort retired when the Navy turned it over to the National Park Service's Gateway National Recreation Area. Today, the fort is a museum and managed by the National Parks Service. Visitors visit daily, to see the great military fort, along with the weaponry used. The fort stands as a reminder for how the nation was protected during the early years of this nation. With most battles taking place between naval and forts, this fort sat in the perfect position to fight off any enemy.