The St. James Hotel is the place where Aaron Burr Jr. died on September 14, 1836. Aaron Burr was the vice president of the United States under President Thomas Jefferson's first term. The St. James Hotel was created shortly after the Revolutionary War, around 1787. It was demolished in 1945 and has been replaced by an apartment complex. There is a plaque on the building marking it as the site of the St. James Hotel and the death place of Aaron Burr.

This is a front view of the apartment complex that stands on the site of the old St. James Hotel. 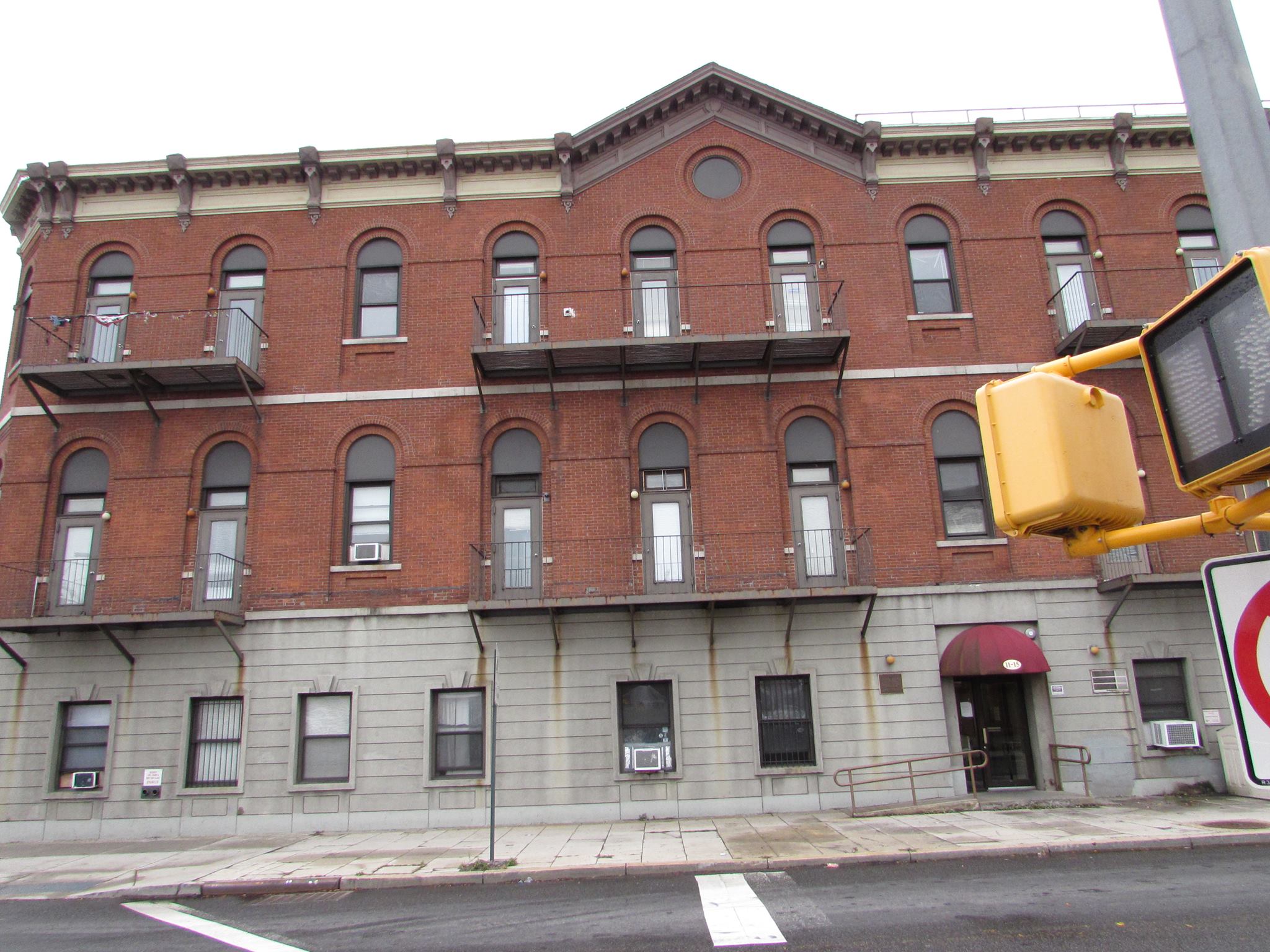 This is a plaque on the front of the apartment building that marks the old St. James Hotel and the death of Aaron Burr Jr. 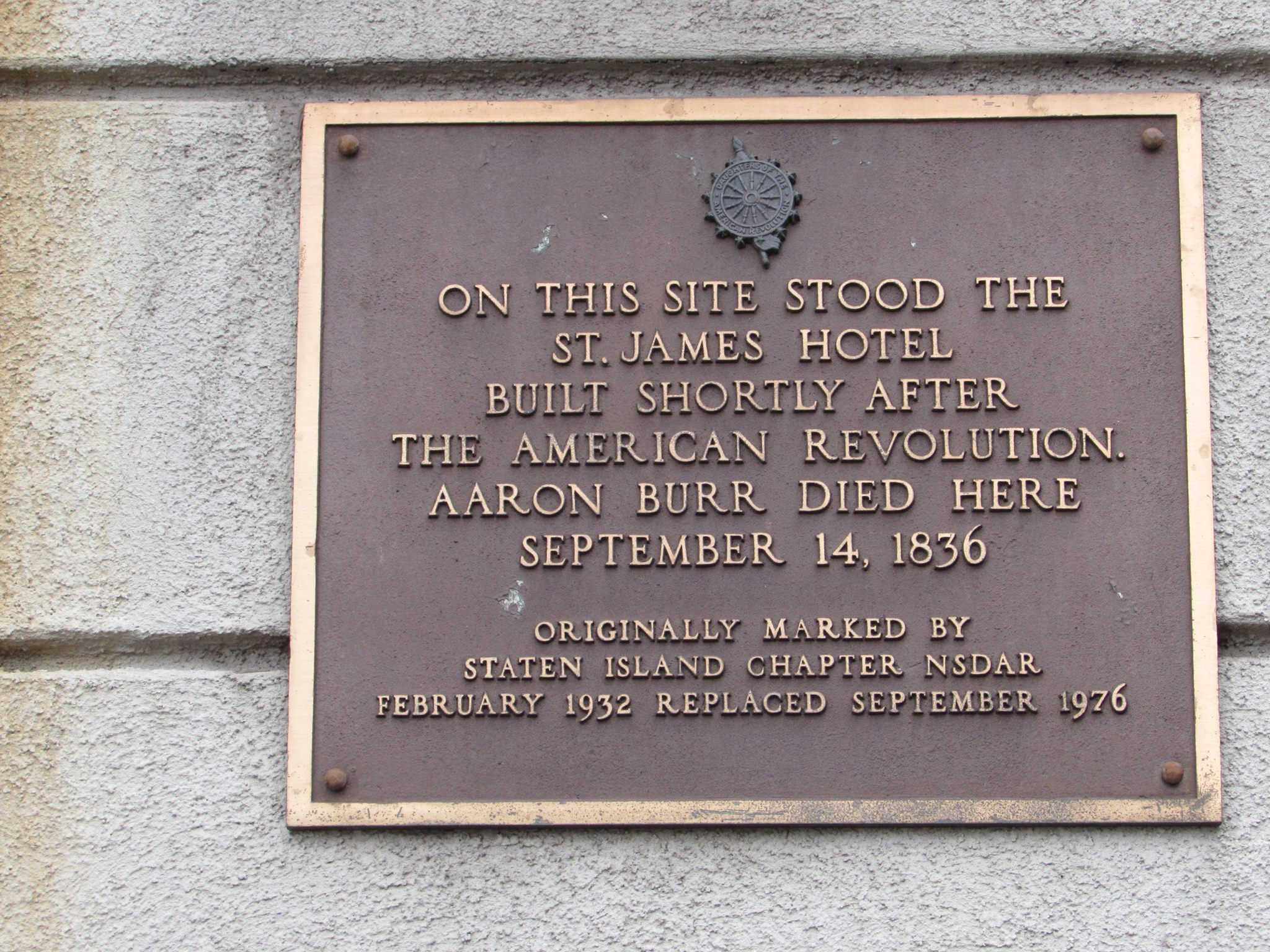 The St. James Hotel was created in 1787, after the Revolutionary War. Later, a street called the Griffith Block was built adjacent to it. The Griffith Block was created in 1874 for Charles Griffith, a shoe dealer. The St. James Hotel was demolished in 1945. It has since been replaced by a small apartment complex. Right next to the front entrance of the building is a plaque stating that the marker was originally placed there by the Staten Island branch of the NSDAR, the National Society Daughters of the American Revolution, in February of 1932. It was updated and replaced in September 1976.
One of the reasons for the St. James Hotel's fame is that vice president Aaron Burr died in one of the rooms in the hotel on September 14, 1836. Aaron Burr was born on February 6, 1756, in New Jersey. In his early years, Burr joined the militia to fight in the Revolutionary War. After the war, he became a successful lawyer and became the New York Attorney General in 1789. Aaron Burr Jr. served as a senator of New York from 1791 to 1797 after he won the election against General Philip Schulyer, Alexander Hamilton's father-in-law. He later lost this seat to Schulyer. He became vice president of the United States from 1800 to 1804 after he lost the House of Representatives vote to Thomas Jefferson after tying with him for votes in the electoral college. Aaron Burr considered Alexander Hamilton his longtime political rival because Hamilton's father-in-law replaced Burr as the New York senator in 1797. Burr also believed that Hamilton used his influence to sway the judgement of the House of Representatives to give its vote to Thomas Jefferson as president. Believing that Hamilton was slandering his name, Burr challenged Hamilton to a duel. Aaron Burr shot and killed Hamilton on July 11, 1804. However, despite public outrage, Burr was declared not guilty of murder and was able to complete his vice presidency. Aaron Burr was later accused of conspiracy, treason, and high misdemeanor in 1807. He was eventually acquitted, but his political career was unsalvageable.
Later in his life, Aaron Burr ran out of money and was fully dependent on his friends by 1830. Burr suffered strokes that made him partially paralyzed. In 1834, following the strokes, his relative, Judge Ogden Edwards, moved Burr to the St. James Hotel at Port Richmond, Staten Island, for easier monitoring for his health. After two years of living at the St. James Hotel, Aaron Burr died in his room on September 14, 1836.