Visitors to the Queens County Farm Museum can tour New York City's oldest continually-operated farm, which dates back to 1687. The 47-acre working farmstead is the largest remaining tract in the city and features animals, farm machinery, a vineyard, various agricultural displays, as well as gardens, planting fields, and an orchard. It is also the host of the annual Queens County Fair. Of course, the centerpiece of the museum is its historic and restored farmhouse, which dates back to 1772. The museum opened to the public in 1975, and due to the generosity of supporters, it is able to offer free general admission (but not during public events) to visitors of all ages. Although the New York City Department of Parks now owns the farm, the Colonial Farmhouse Restoration Society of Bellerose, Inc operates it.

This site has been operated as a farm since 1697 and this restored farmhouse dates back to 1772. 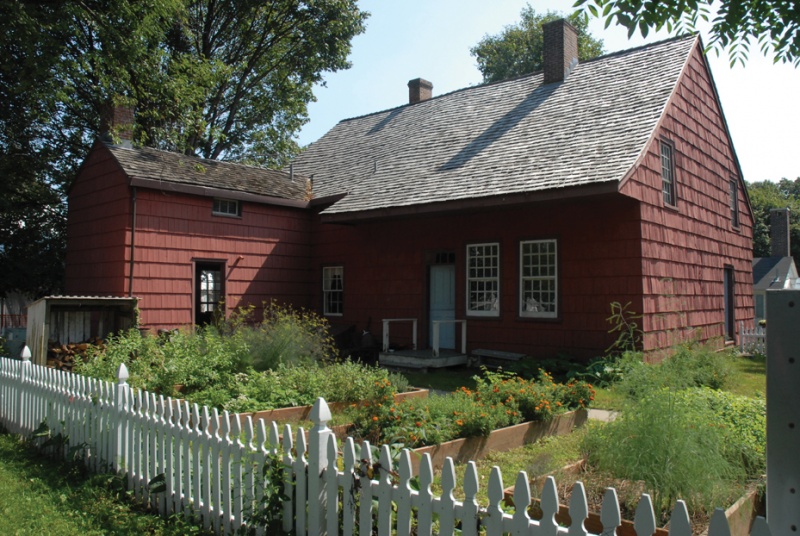 The original owner of the farm was John Harrison. He later sold the farm to Elbert Adriance in 1697. The farm remained in the Adriance family for over a hundred years. When Elbert died in 1704, his son Rem inherited it. After Rem's death in 1730, the farm was passed down to his son, who was also named Elbert, and Elbert sold some of it to his younger brother Jacob. Jacob was significant in the foundation of the farm because he built the first portion of the farmhouse, which contained three rooms. He and his wife had no children and farmed mostly for food and not profit. When they died, the farm was inherited by Jacob's nephew, Hendrik Brinkerhoff. When Hendrik died, the farm was passed on to his son, Albert Binkerhoff, who sold it to John Bennum. This marks the end of the Adriance era (1697-1808).

John Bennum Sr. owned the farm until he died in 1882 and passed it down to his son, John Bennum Jr. However, due to severe droughts and unfortunate weather, John Bennum Jr. was forced to sell the farm to Daniel Lent later that year. Lent's fate was similar to John Bennum Jr.'s fate in that he also faced many weather problems. In 1826, there were two droughts followed by floods and heavy rainfall. Adding on to his misfortune, farming was becoming more industrialized, so small farmers had very little chance competing with the new farming technology. Consequently, Lent sold the farm to Peter Cox in 1833.

Peter Cox bought the farm during a time when agricultural practices were changing in America. He brought many of these improvements to the farm, especially after doubling the size of the farm in 1885. Cox grew a variety of produce such as corn, wheat, and potatoes, which he sold until he died in 1870. At that time, his son, Henry, made changes to produce market-garden crops, which turned the farm into the biggest market-crop producer in Queens by 1879. In 1892, Henry sold the farm to Daniel Stattel for $20,000.

Daniel Stattel made further improvements to the farm. By adding new structures and improving old ones, as well as by buying newer farming tools, he increased the property value to $32,000. However, this was the last time that the farm was privately owned.

Pauline Reisman bought the farm in 1926. In a couple of months, she sold it to a New York State hospital. The Creedmoor State Hospital used the farm to help rehabilitate their patients by allowing them to farm the lands and produce food. The Hospital also destroyed many of the outbuildings and created new ones that matched their needs. The Hospital owned until 1975.

After 1975, James A. Trent, who is the president and founder of the Museum, took steps to protect the park by restoring much of what was lost over time. The restoration of the Adriance Farmhouse was completed in 1986, and further restoration projects followed. Today, when guests visit the museum, they can watch produce as it moves from the fields to our tables.

Open seven days a week, year-round from 10 am to 5 pm. Guided tours on weekends.