On April 20, 1999, a school shooting at Columbine High School took the lives of twelve students and one teacher in Littleton, Colorado. This massacre, at the time the deadliest school shooting in history, sparked controversy about gun control and devastated the local community and people across the nation. In June 1999, the Columbine Memorial Committee began developing a memorial to be "a place of remembrance, peace, and spirituality," which would honor the victims and provide comfort for the living. The Columbine Memorial was dedicated on September 21, 2007, after which the Columbine Memorial Foundation was established to maintain the memorial and grounds. Located in Clement Park, adjacent to Columbine High School, the memorial covers an acre of open field and includes the Ring of Remembrance and the Wall of Healing.

The Columbine Memorial welcomes visitors to reflect and heal after the tragic events of April 20, 1999. 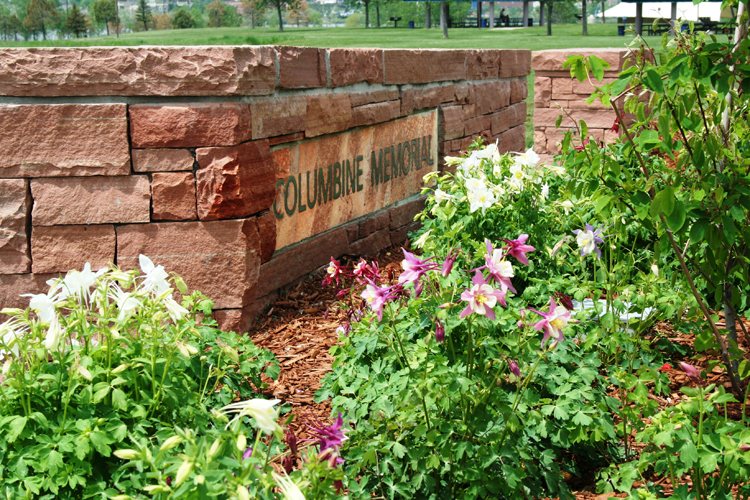 The Never Forgotten ribbon lies in the center of the Ring of Remembrance. It was designed by Kyle Velasquez's parents, Al and Phyllis. 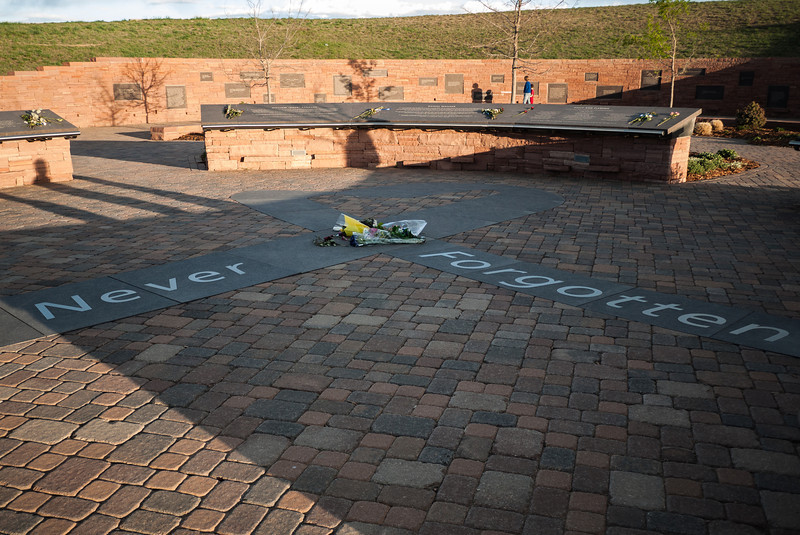 The Columbine Memorial is in Clement Park, near Columbine High School, providing a tranquil field and views of the Colorado foothills for reflection. 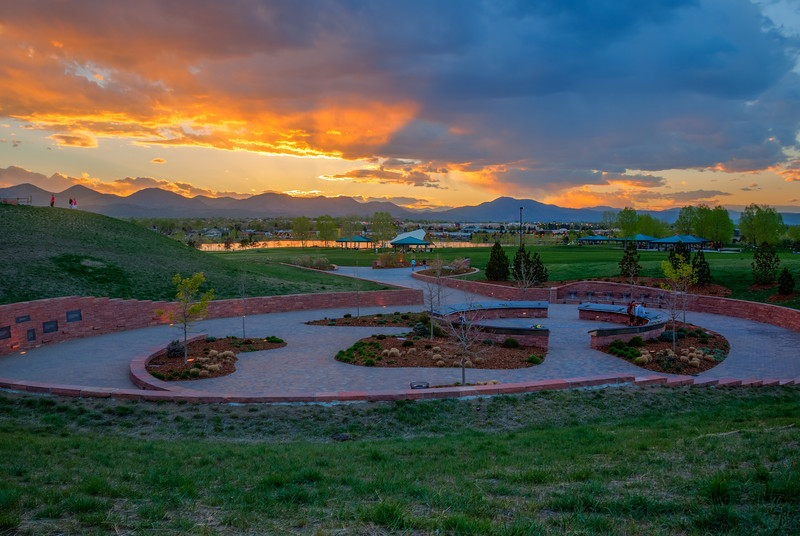 Located on the Wall of Healing, a visitor can read quotes which were given by students in regards to the massacre. 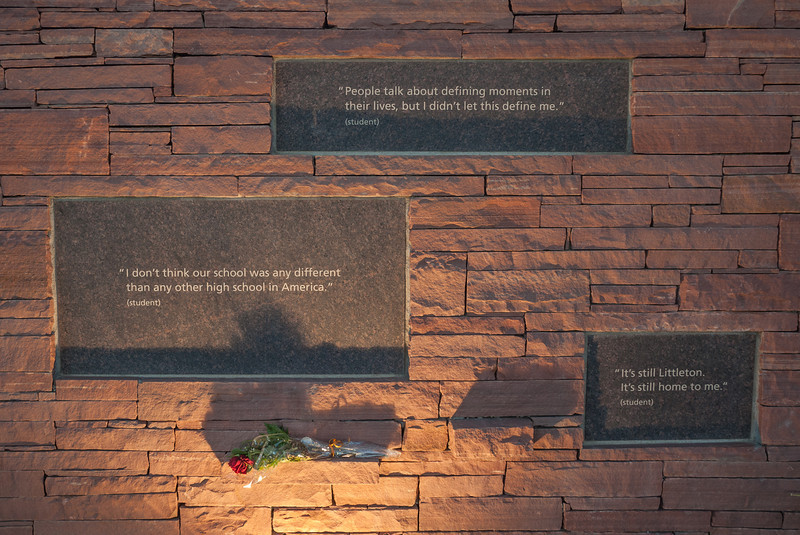 Rachel Scott is one of the most recognized victims of this shooting. Rachel is commonly known because her parents set up an organization in her memory, Rachel's Challenge, which encourages acts of kindness. 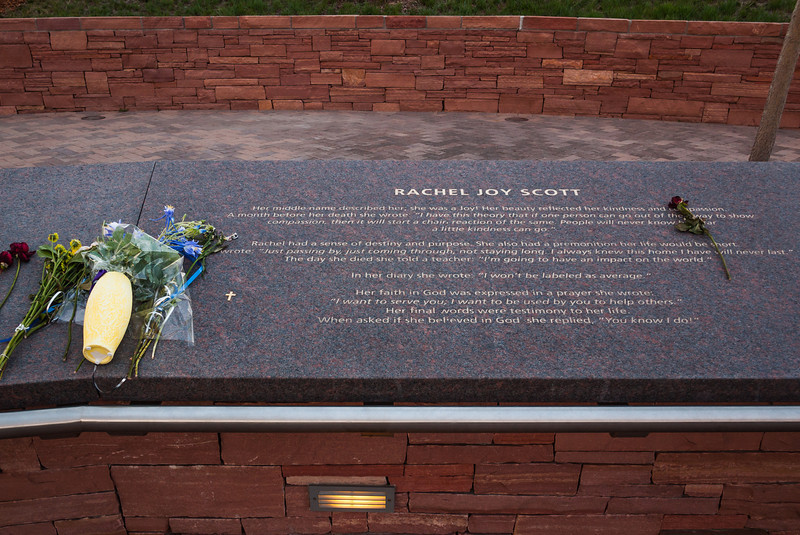 “Sit down and reflect with hope for a better future.” – Frank DeAngelis, Columbine High School principal 1

The morning of April 20, 1999, forever changed Columbine High School and its surrounding community. Two male students, armed with weapons and a premeditated plan, entered their school with plans to blow up the cafeteria. After the bombs did not explode, the boys reentered the school with guns. Twelve students and one teacher lost their lives and another 21 were injured. With 15 dead in total (including the two gunmen, who took their own lives), Columbine High School was the deadliest school shooting in history at that point.

The massacre rocked the local community as well as the nation, sparking debates over gun control, school safety, bullying, and teens’ exposure to violence. As nation grappled with the events at Columbine, its very name becoming part of Americans’ lexicon of tragedy, the memorial shined a spotlight on the lives lost and those in need of a place to grieve, reflect, and heal.

Immediately after the massacre, ephemeral memorials honored the victims with flowers, stuffed animals, pictures, and notes. In June 1999, less than two months after the massacre, the Columbine Memorial Committee was formed to “create a physical, permanent memorial for our community and others to honor and respect those touched by the Columbine High School tragedy,” according to its mission statement.2The Committee included members of Columbine’s Class of 1999, past and present faculty, parents, community and business leaders, first responders, and public officials. Collaborating with Columbine families and community members, the Committee set goals to create the memorial, selected DHM Design of Denver as the architect, raised $2.2 million in funds, broke ground on June 16, 2006, oversaw construction, and dedicated the memorial on September 21, 2007. Their efforts to remember Columbine occurred in tandem with other tragedies of the new millennium, including the 9/11 terrorist attacks, the Virginia Tech massacre, and natural disasters such as Hurricane Katrina. A permanent memorial for Columbine would solidify the events at Columbine in American memory.

To design the memorial, the Columbine Memorial Committee worked closely with victims’ families and a design consultant, while also integrating responses from a survey of 3,500 people. The memorial consists of stone walkways and low walls built into an acre of Clement Park’s landscape, a naturally quiet and peaceful place. It invites visitors to walk in remembrance of the lives lost and touched by the tragedy. The inner portion of the memorial is the “Ring of Remembrance,” which includes the names of the thirteen victims and a special reflection written by each of their families. In the center is a stone ribbon with the words “Never Forgotten,” designed by the parents of Kyle Velasquez. The “Wall of Healing” comprises the outer portion of the memorial, which draws attention to those injured and provides space for the public to personally heal from the event. The wall incorporates quotes from survivors, first responders, and speakers at the memorial’s groundbreaking. The Committee chose not to include the killers’ names on the memorial. According to chairman of the Committee, Bob Easton, “The idea is to honor those innocent victims who were killed.”3

More than 300 family members of victims, along with members of the public, attended the dedication ceremony on September 21, 2007. Thirteen doves were released to symbolize the thirteen victims, and more than 200 were released after to honor the injured, first responders, and members of the community. The Columbine Memorial Committee, having accomplished its mission, disbanded and the Columbine Memorial Foundation was established to maintain the memorial, which costs between $10 – 15,000 each year.

The Columbine Memorial continues to be a place of reflection and remembrance. Scholars have studied the memorial as part of a larger effort to understand the meanings, designs, and planning strategies of public memorials and their impact on American culture. Memorial plans for other school shootings, such as at Sandy Hook Elementary, have looked to Columbine for assistance. Some scholars have advocated for more historical interpretation at such memorials, so that the public can grapple with both the tragedy and also the heinous actions that lead to such tragedies. As the events on April 20, 1999, continue to be reframed in the context of subsequent massacres and school shootings, the Columbine Memorial remains a touchstone for all those affected by gun violence.