Fort Fisher was known as the "Gibralter of the South" because it was the last coastal stronghold for the Confederacy along the mid-Atlantic. Control of this fort allowed the South to control the Port of Wilmington until a Union offensive in December 1864 and January 1865 forced the Southern defenders to surrender the fort- an event that accelerated the end of the war. As other Confederate forts fell between 1861 and 1864, Fort Fisher had become the main port for the Confederate armies along the Atlantic. Blockade runners arrived in the port daily with food, clothing, and munitions that were shipped overland throughout the Carolinas and the Confederate Capital of Richmond and armies in Virginia. The advanced construction techniques that were used in building this fort helped its defenders sustain a number of attacks. However, in January 1865, a combination of Union naval and ground forces was able to surround and overtake Fort Fisher.

Union control of this fort reduced the capacity of the Confederate Army to stay in the field and accelerated and the end of the Civil War. 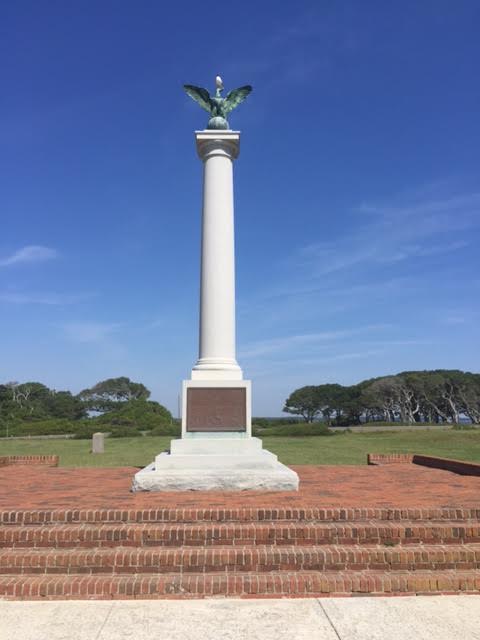 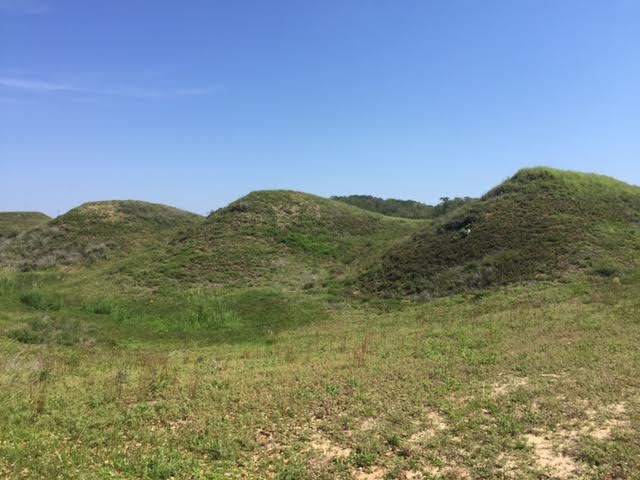 The "Bloody Gate" of Fort Fisher. This was the entry point into the Fort during the final battle 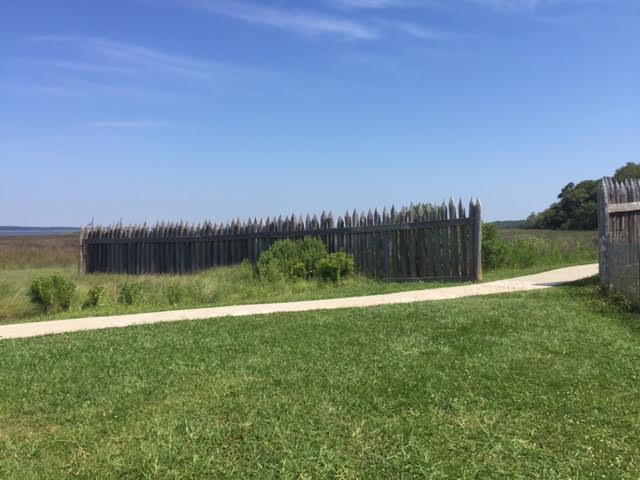 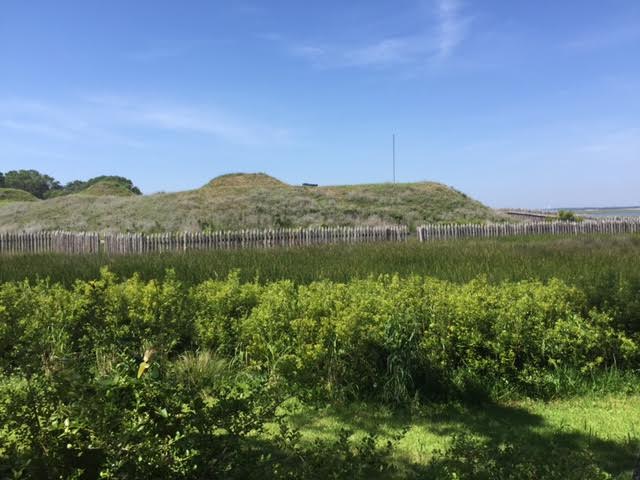 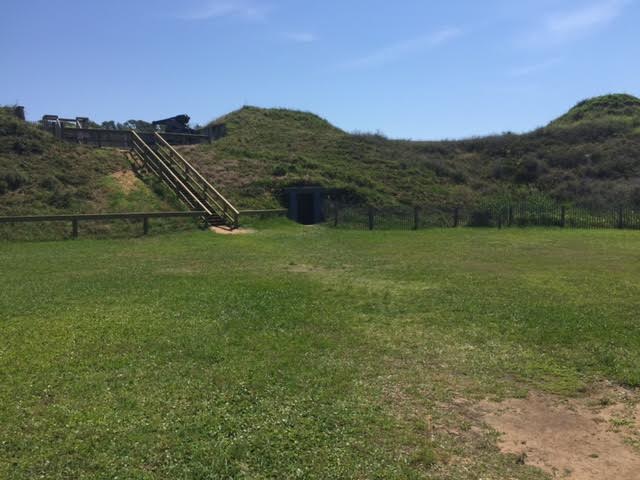 A view from the Gun Mount overlooking the Cape Fear River 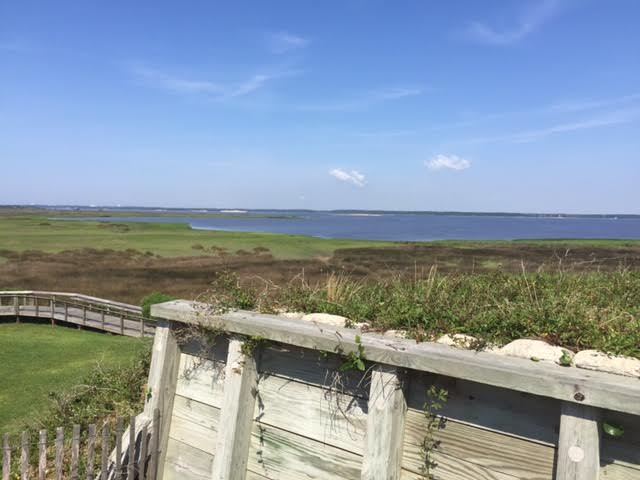 Fort Fisher is located along Kure Beach in a stretch of land south of Wilmington, North Carolina with the Atlantic Ocean on one side and the Cape Fear River on the other.  Fort Fisher was one of many important Forts that the Confederate Army occupied during the Civil War. In late 1864, Fort Fisher was the final remaining  Confederate coastal stronghold in the Carolinas and allowed the South to retain control of the port of Wilmington.

The fort was not particularly effective by 1864, however, as Union blockades at the mouth of the Cape Fear River made it difficult for Southern ships to reach Wilmington.  The Confederates relied heavily on blockade runners but it was difficult for even the fastest ships to bring supplies to the Port of Wilmington. Over the span of the final six months of 1864, the ports of Charleston and Wilmington alone imported about 50,000 rifles in addition to cannon, millions of pounds of food, ammunition and other equipment such cannon according to exhibits maintained by the Fort Fisher Historic Museum. The Union knew that in order to reduce the South's capacity to supply their army, they needed to eliminate Fort Fisher so that they could stop Confederate ships from reaching the down the port of Wilmington.

Taking Fort Fisher was easier said than done.  It was, at the time, one of the most technologically advanced forts.  With the emergence of weapons that would demolish masonry construction, the leader of the fort, Colonel William Lamb, new he had to construct a completely different style fort.  He constructed 17 traverses that protected heavy guns along the North face.  There was also a 25-foot thick parapet along the outer slope which was also sodded with thick marsh grass. These traverse’s and the parapet created bombproof shelters that the Confederate armies would use to wait out heavy artillery on several occasions by the Union Navy. The sandy mounds absorbed the cannon fire, as opposed to the previously used masonry in many forts that would explode along with the cannon balls.  Lamb also constructed an underground hospital and battery.

Lamb used forty-seven different guns to fortify Fort Fisher, which included seventeen heavy guns, twenty-seven mounted guns, and two long-range guns. He did not stop there, “across the peninsula at a distance of 500 to 600 feet outside the palisades was a line of torpedoes”(Jackson, A  History of Fort Fisher). Perhaps the most impressive and technologically advanced feature was “an electronically detonated minefield triggered by connecting wires from the mines to a battery inside the fort. (Gragg 1991, 21).

The Union recognized that they could not take one fort without first eliminating its battery. This was even more apparent following the attack on December 24th. On that day, the Navy started bombarding the fort with 60 naval ships. After a day of firing, the fort withstood the constant barrage and the majority of the Confederate guns were still operational (McCaslin 2003, 61). The Union Navy disengaged on December 25th, 1864 but remained in the area.

The final battle came just over two weeks later. On January 13, 1865, The Navy began another long ranged assault on the Fort. This assault as much more effective, the Union fleet, aware of the location of the Confederate artillery due to their muzzle flashes, began to destroy Confederate gun emplacements with concentrated fire. (Robinson 1998, 153).  On January 15th, after two days of Naval bombardment, having already landed days earlier, the land attack commenced around 3:00 p.m.  By the time this attack started, the Navy had already “killed several hundred soldiers and disabled sixteen of the twenty artillery weapons on the fort’s land face” (McCaslin 2003, 73).  Over the next seven hours, a bloody and violent close range battle would take place between the 10,000 Union troops and the 8,300 Confederate Soldiers. At approximately 10:00 p.m., after 1057 Union casualties, 1900 Confederate Casualties and the destruction of most of Fort Fisher's defenses, surrender was ordered.

Within days of the fall of Fort Fisher, the Union was able to make its way 20 miles up the Cape Fear River and overtake the Port of Wilmington, which was the last remaining seaport.  Upon hearing this news, the desertion numbers within the Confederate Army began to increase. With Confederate supply lines cut and the continued Union offensive, Robert E. Lee saw little choice but to surrender his army to Grant at Appomattox.

Fort Fisher was known as the “Gibraltar of the South” and it's demise accelerated the end of the war. When the Union took control over the war by cutting off the last line of supplies, crippling the Confederate's only remaining chance of supplying their armies.

Many years later, during WW2, Fort Fisher was used as a training base for anti-aircraft vessels. The site today is a National Historic Landmark that includes a museum that offers movies, tours, artifacts, and extensive amounts of information regarding the history of the fort. There is roaming walking path set up across the land with informational plaques that contain stories and facts about the fort. There are replica cannons and guns set up in various locations including some reconstructed batteries. The large mounds and parapets are still easily visible, as is the door to the battery and underground bombproof hospital.