This historic house was built in 1883 for the family of Harvey Wells, an entrepreneur and the founder of the city that bears his name. The Wellston Historical Association is working to restore the home, which served as a nursing home for many years after Wells' tragic death.

Local residents are working to restore this historic home, which is llisted on the National Register of Historic Places 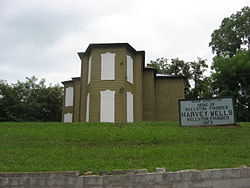 As the local coal and iron furnace boom led to the region's economic growth in the late 19th century, Wells envisioned Wellston as the future "Pittsburgh of the West." However, a fire destroyed parts of the city in 1888 which required Wells to borrow money to rebuild parts of the town. Wells died in 1896 in significant debt, and much of his property was sold at auction.