In 1942, the U.S. Army purchased and converted the resort into a 2,000 bed hospital known as Ashford General Hospital. 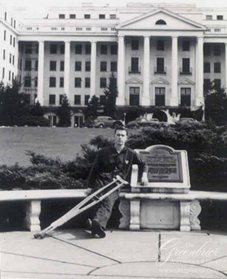 Robert S. Conte, The History of The Greenbrier: America's Resort-click the link below for more information about this book 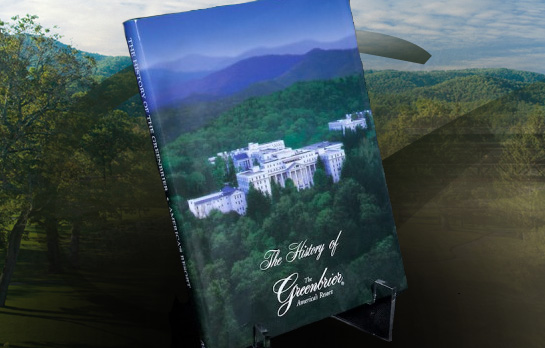 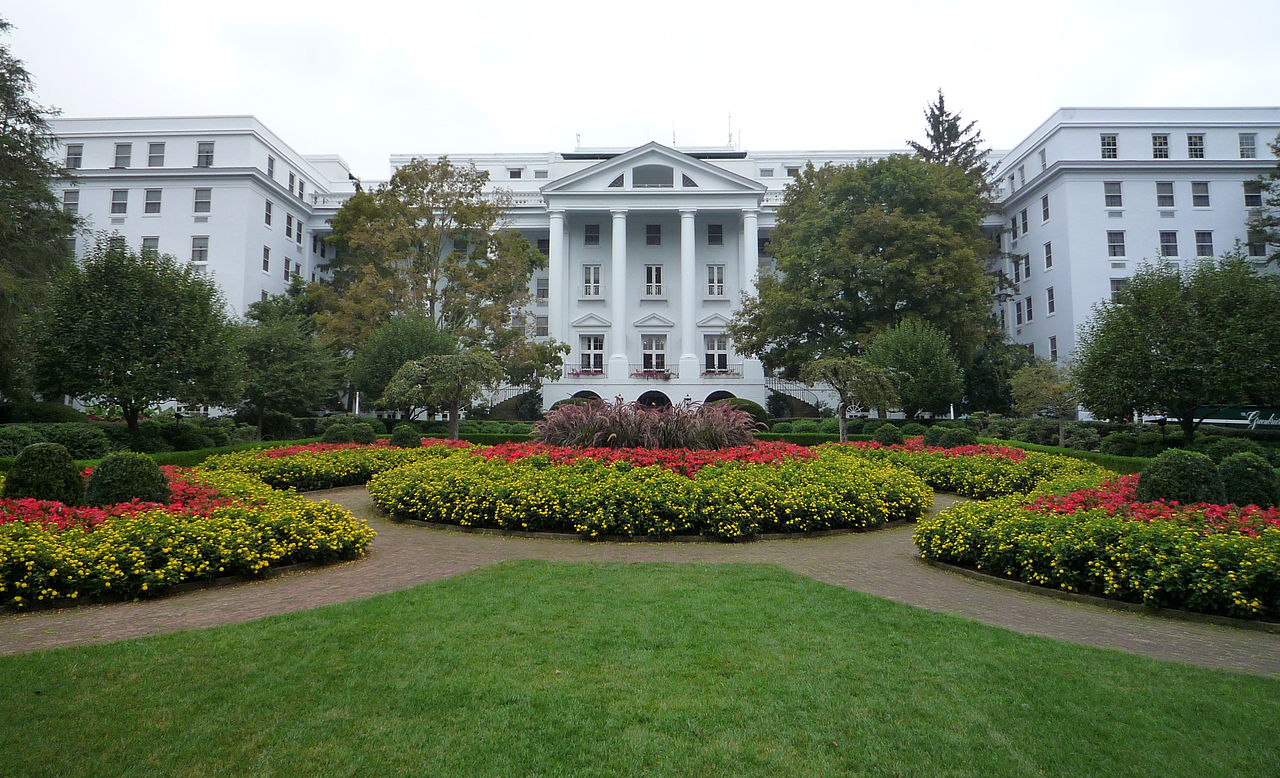 During the Cold War, this top secret bunker held space for Congress to live and work underground behind blast-proof doors. Today, guests can tour the bunker and learn about its creation during the Cold War. 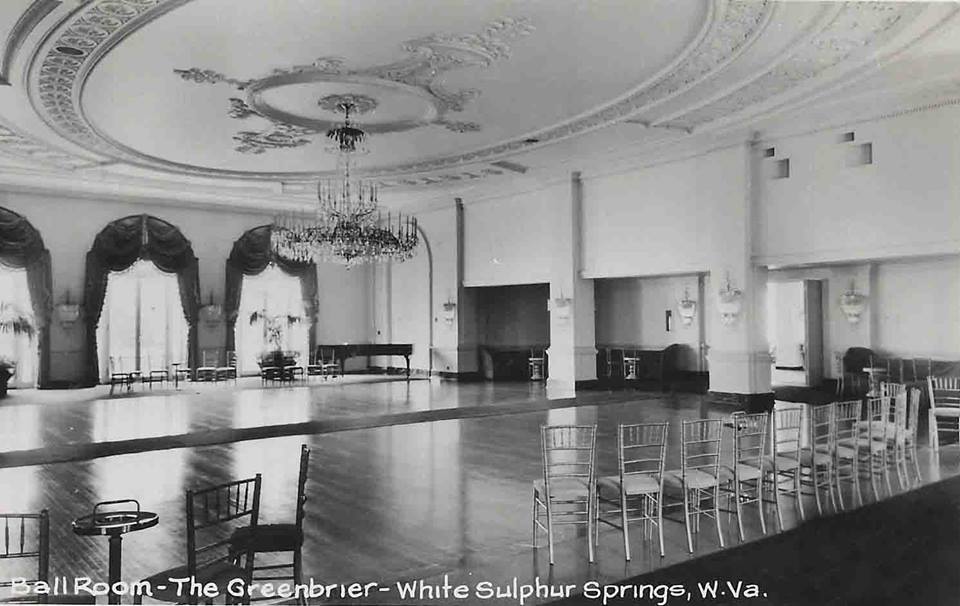 The first guest came to White Sulphur Springs in 1778. They visited the spring to “take the waters” and restore their health. It was in the 1830s the resort first became prominent. Politicians, judges, editors, lawyers, diplomats, ministers, planters and merchants, most who came from the South, made annual trips to meet at the “village in the wilderness”. Their trips to the resort took place during the summer. The reason for this is the 2,000 foot elevation of the resort which offered the travelers relief from the lowlands heat and humidity.

Between 1830 and 1861 there were five sitting presidents who stayed at the resort. In 1858, due to White Sulphur Springs’ success the first large hotel, named the Grand Central Hotel (also known as “The Old White”) was constructed. From 1861-1865 the resort closed due to the Civil War. The grounds were occupied by both Union and Confederate troops who used the hotel as a hospital and military headquarters. Not long after the end of the war the resort reopened.

Given its geographic location in the Appalachians, it was, and still is difficult to differentiate its allegiance between the North and the South. The newly built central hotel was a popular place for northerners and southerners alike to vacation. During the civil war, the hotel was nearly destroyed by changing ownership from the Confederate Army to the Union Army. When the Civil War ended, the resort reopened. Once again, it was a popular place for northerners and southerners to vacation. From a cultural standpoint, this is important to consider because many places were deemed either Northern OR Southern in culture and visitation. Most importantly, Robert E Lee delivered the White Sulphur Manifesto here which called for the unification of both societies, North and South, after the war.

In 1873 the Chesapeake and Ohio Railway was completed and improved the resorts prospects. In an effort to expand, the C&O purchased the resort property in 1910. The Greenbrier Hotel was added by the C&O in 1913. They also added a Mineral Bath Department and an 18-hole golf course. Charles Blair, the most prominent contemporary golf architect of the time designed the golf course with is now called The Old White Course.

In 1914 the Greenbrier opened for the first time year round. President Woodrow Wilson and his wife spent their holiday here while Joseph and Rose Kennedy travelled from Boston to spend their October honeymoon at The Greenbrier. In the 1920s The Greenbrier became a traveling network within high society. The network stretched all the way from Palm Beach, Florida to Newport, Rhode Island. In 1922 the Old White Hotel was removed from the property. Its removal led to the rebuilding of The Greenbrier Hotel in 1930. The renovation created more space, adding twice as many guest rooms which increased the number to 500. The hotel’s main entrance was redesigned by an architect from Cleveland, Ohio named Philip Small. Small added the Virginia Wing (inspired by Mount Vernon) and the North Entrance façade.

In 1941, after the United States entry into World War II, the hotel was leased out to the U.S. State Department for seven months. German, Japanese, and Italian diplomats, along with their families, were moved from Washington, D.C. to The Greenbrier until exchanges for U.S. Diplomats stranded overseas were completed. A year later, in 1942 the U.S. Army purchased the hotel and converted it into a hospital with 2,000 beds. The hospital became known as Ashford General Hospital and over a four year period, over 24,000 soldiers were admitted and treated in the surgical and rehabilitation center.

The C&O Railway took the hotel back in 1946 after the U.S. government was done using it. The C&O commissioned for the interior to be redecorated by a noted designed named Dorothy Draper. After its renovation The Greenbrier reopened in 1948. It was not long until the U.S. government would ask for The Greenbrier to assist them once again. In 1950 they ask the hotel to allow the construction of an Emergency Relocation Center (bunker or bomb shelter) for Congress to occupy in the event that a war broke out. The underground facility was built along with an above ground addition to the hotel called the West Virginia Wing. The bunker remained ready in case of an emergency for thirty years. The project was terminated in 1992 and the bunker decommissioned after the Cold War ended and the project was exposed by the press.

The Greenbrier Course was redesigned in 1978 by Jack Nicklaus, allowing it to be ready for the 1979 Ryder Cup Matches. The course has also served as the venue for three PGA Senior tournaments in the 1980s and the Solheim Cup competition in 1994. In 1999 Bob Cupp redesigned, rerouted and upgraded the older Lakeside Course creating the new Meadows Course. The project also created a new Gold Academy. Custom designed home neighborhoods were created by the Greenbrier Sporting Club beginning in 2000. These homes included a panoramic view of the Allegheny Mountains. In 2004 the infinity edge outdoor pool was opened also offering a breathtaking view of the Allegheny’s.

The Old White Course was revamped by Lester George who created a challenging new version of the old course in 2006. The Greenbrier changed ownership on May 7, 2009 when Jim Justice, an entrepreneur from West Virginia bought the resort from the CSX Corporation (successor of the Chessie System and the C&O). In August 2009 construction was set to build a casino and The Casino Club at The Greenbrier opened on July 2, 2010. Also in 2010, Mr. Jim Justice arranged for the PGA Tour to be relocated with a multi-year contract under the name The Greenbrier Classic. The first Greenbrier Classic was held July 26-August 1, 2010.

On March 28, 2011 The Old White became a Tournament Players Club Network course. The Greenbrier Champions Tennis Classic held in September 2012 was won by Pete Sampras. Two years later, in April 2014 Sampras was named The Greenbrier’s first Tennis Pro Emeritus. In July 2014, the New Orleans Saints relocated their training camp to The Greenbrier and in June 2015 the Center Court at Creekside professional tennis stadium was opened.