On the night of September 6th, 1861, two African American men, Marshall Clark and James Shelton, were involved in an altercation with two recent immigrants of Irish descent. As the argument escalated, one of the Irish men, Dabney Carney, was left dying on the ground with multiple stab wounds. Before he died, however, he identified James Shelton as the man who stabbed him. Understanding the eventual violence requires a look into first decades of Milwuakee history, where in the 1830s, less than 500 people lived in the area. Nevertheless, Milwaukee was revered for its maritime trade—it was on par with Chicago until the arrival of the railroad—and economic opportunities, and therefore, the city flourished with new inhabitants, including African Americans, Irish, Eastern Europeans, and Germans, among others. Police presence, however, did not keep up with the rapid population growth. After Clark and Shelton were apprehended and taken to the city’s jail (at the site of the modern day Cathedral Square), a mob of 200 to 300 people formed and broke into the jail. The mob grabbed Clark and began beating him, while Shelton snuck out the back. Afterwards, they dragged Clark down Jackson Street to Detroit Street (East St. Paul Avenue today). A mock trial was held and the mob found Clark guilty of the murder of a white man, and they sentenced Clark to death by hanging. At the time, Sheriff Charles Larkin demanded the mob hand over Clark, but the sheriff was greatly outnumbered. The mob fastened a rope to a pile driver and lynched Clark near the corner of Buffalo and Water Street. This incident of vigilantism by a racially-motivated mob remains the only documented case of a lynching within the city of Milwaukee. 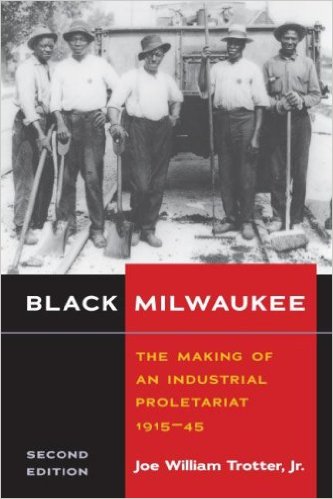 History Leading Up to the Lynching

Milwaukee was only a village in 1834, and as such, law and order was enforced by a town marshal. Growth was rampant in those first few decades, and when Milwaukee became a city, it had a city marshal unable to keep up with lawless elements, such as the population of thieves and burglars who found Milwaukee to be a safe place for their illegal activities. By October 4th, 1855, the Milwaukee Police Department began functioning. William Beck, a former New York detective, was given the role of Chief of Police, and beneath him served six officers.

Around 1861, Milwaukee’s Irish population was greatly strained, and despite sympathetic sentiments toward the growing population of African Americans in the Union city, the coming of the Civil War and the June 1861 bank riots made Milwaukee a powder keg waiting to explode.

The Lynching of Marshall Clark

The evening of September 6th, 1861, was a calm and relatively uneventful evening, and Marshall Clark and James Shelton were strolling along Milwaukee Street escorting two white women. On their evening stroll, they came across Dabney Carney and John Brady, and Carney made a derogatory mark about the African Americans spending time with white women. Naturally, Shelton took offense and confronted Carney, saying, “We know you Dabney Carney we are as good men as you or any other d--- Irishman or Yankee, either.” A fight broke out, and Shelton and Clark were soon overpowered. Shelton pulled out a knife and stabbed Carney in the abdomen and slashed Brady. Clark, Shelton, and Brady all fled while Carney was left dying in the streets from his wound. Clark and Shelton were soon captured, and before Carney died the following Saturday, he identified Shelton as the man who stabbed him.

Rumors abounded throughout the Irish of the Third Ward, and police chief William Beck sent investigators to analyze the situation, but the investigators found nothing wrong. Once word spread that Carney had died, a fire alarm rang out in the Third Ward and a mob of men gathered and marched to the jail holding Clark and Shelton. William Beck and two police officers arrived at the jail first, and tried to disperse the men, but from somewhere within the crowd, a projectile flew forth and struck Beck in the head, knocking him unconscious.

The mob entered the jail soon after and, using a large piece of timber, battered through the iron gate. They then seized the jailers and locked them in a cell. Meanwhile, Shelton had successfully moved into an adjoining cell and hid. Clark, however, was alone, and the mob grabbed him, dragged him from the cell, and began beating him senseless. The mob then dragged Clark along Milwaukee Street and took him to Engine Company No. 6’s firehouse to hold a mock trial. The “court” found Clark guilty of killing a white man and sentenced him to death. Already a rope was tied around Clark’s head as the mob led him out of the firehouse and to the corner of Buffalo and Water Street.

The end of Clark’s rope was taken up a ladder and tied to the round of a pile driver, and Clark was shoved off the ladder, left swinging in the air.

Shelton had escaped during the lynching, but was re-captured by law enforcement and tried in a real court, beginning on September 30th. He was found not-guilty and that he had acted in self-defense. Many of Carney’s friends, dissatisfied with the verdict, wanted to see Shelton join Clark, but due to Sheriff Larkin and others, Shelton was spirited out of Milwaukee to Chicago, where he set up residence. Six men were charged with the crime of lynching Marshall Clark, with one fleeing and the other five making it to the courtroom. After much debate and testimony, the trial ended in a hung jury.1

1.) Vollmar, William J. "The Negro in a Midwest Frontier City, Milwaukee: 1835-1870." Thesis submitted to the Faculty of the Graduate School, Marquette University, Pages 65 to 72. Accessed October 11, 2015, from http://www.marquette.edu/library/theses/already_uploaded_to_IR/vollm_w_1968.pdf