The Concord Schoolhouse , open from 1775-1892, was Germantown's first English language school. The school is sited on a lot set aside in 1692 to serve as a civic burial ground. 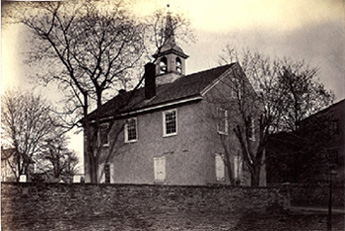 The Concord School sits on a corner of the Upper Burying Ground of Germantown, which was established at the beginning of the settlement in 1693. The construction of the stone schoolhouse, originally one story, took place under the supervision of a group of residents, one of whom was Jacob Knor, the builder of Germantown Academy, between March and October 1775. The second story and the bell tower were added to the building around 1818.

The first minute book of the school, in use from the school’s early decades through the early twentieth century, is held by The Historical Society of Pennsylvania. According to these minutes, inhabitants of upper Germantown (122 subscribers) collected funds to build the schoolhouse because of “the Distance and particular Inconveniance [sic] through the Winter Seasons of sending their Children to the Lower School and Seeing the number of Children Continually Increasing . . . .” Concord was established as an English-only school, although this probably suggests not that residents of German origin were excluded, but rather that assimilation of German speakers to English-language culture had largely taken place.