This small building was one of six international observatories established in 1899 along the same latitude (39° 8' N) for the collection of data regarding the wobble of the Earth on its axis. When the roof parted, a reflecting telescope inside could observe the night sky. This observatory was one of the first four established, with the number growing to six in subsequent years. Each night for decades, scientists collected measurements and data which assisted in the study of the geophysics of the planet and which aided orbiting spacecraft in navigation. This data collection persisted even during World War II, though it was not continuous due to interruptions from weather, earthquakes, military action, and funding shortfalls. Eventually human telescope operation grew obsolete and the observatory closed in 1982.

Gaithersburg Latitude Observatory by Catherine A. Masek, 1991, courtesy of Maryland Historic Trust (reproduced under Fair Use) 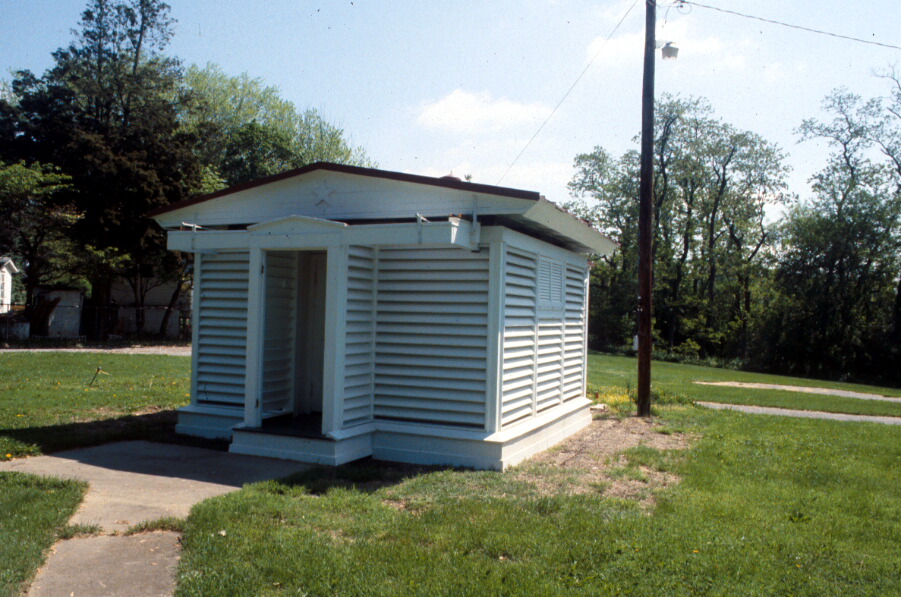 Designed by architect Edwin Smith in 1899, this observatory has been the site of scientific study of polar motion. It is a thirteen-square-foot building with one story. The gable roof separates into two sections on wheels to expose the interior of the building for telescopic observation. In the main room of the observatory is a pyramid-shaped structure built into the double floor, which once held the telescope and other scientific instruments. The observatory used a Zenith Telescope of 108 mm focal length and 104X magnification.

Near the building, about 200 feet to the south, is the Meridian Mark Pier, a green structure used for marking the azimuth (angular measurement), which was necessary for aligning the Zenith Telescope.

The International Geodetic Association, which studies the Earth's curved surface, established the International Polar Motion Service that year as a collaboration between six observatories to study the motion of the Earth. In addition to this one, the original observatories were located in Ukiah, California; Mizusawa, Japan; and Carloforte, Sardinia, Italy (which was relocated to Cagliari in 1978). Later, two observatories were added in Cincinnati, Ohio and and Tscharjui, Russian Turkestan (relocated to Kitab, Uzbekistan in 1935). These observatories produced a wealth of data for scientists between 1900 and 1960, including during World War II.

As human-operated telescopic observation became obsolete in the latter part of the twentieth century, the observation closed in 1982. The telescope and instruments are now in storage in Corbin, Virginia. The National Register of Historic Places recognized the building in 1985. The site is still relevant to scientific data collection, as the U. S. Coast and Geodesic Survey still uses markers on the site for global positional satellite (GPS) correction. The area is now a park.