The battle of Ball's Bluff was a small skirmish between the Union and Confederate forces during the civil war. The battle occurred on Oct. 21st 1861 marking it one of the earliest battles in the war. It took place in Virginia just past the Potomac River. Before the battle an advanced scouting party was sent ahead and reported back a deserted camp. Hearing this, Col. Charles Devens leading the force decided to attack the camp while the Confederates were away and gain a foothold in Virginia. Upon entering Virginia, they found the camp had actually just been a series of trees. Soon after they were spotted by a Confederate force and attacked. The Union force quickly retreated back attempting to get to a better position in order to retaliate. Ultimately a number of Union soldiers died and the skirmish was lost. Today, Ball's Bluff Battlefield and National Cemetery holds 54 fallen Union soldiers from the battle also commemorates the battle. 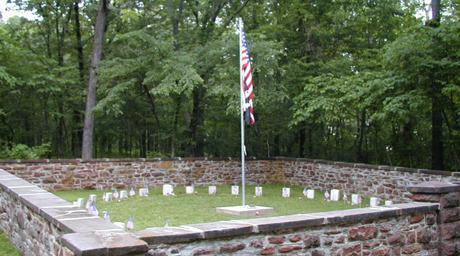 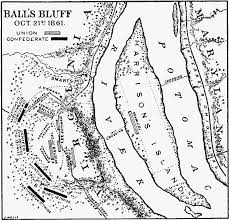 The Battle of Ball’s Bluff was a relatively minor battle that took place in Leesburg, not to far from downtown Washington, DC. It was in October of 1861, which had been months after the General Irvin McDowell’s disastrous attempt at seizing the railroad junction at Bull Run or Manassas. Unlike Bull Run, the Ball’s Bluff would be not a planned event, but an accident that occurred which drove Union into an ill-fated encounter with Rebel forces in the vicinity.

With the defeat at Manassas, many of the Union’s top generals were more than willing to create a situation for the rebel army that would have them forced to retreat from a major railroad center, which would eventually, lead them to Richmond. Thus Union officers set their sights on the Washington & Old Dominion Railroad. Leading the Union troops was the newly appointed George McClellan. McClellan sent his Brigadier General Charles Stone into Leesburg the evening of October 20. The problem was that his subordinate officer Captain Chase Phillbrick, had mistaken a line of trees for a tent city. He ordered fire on the “tent city” until he realized it was not that at all.

When this occurred, the result was that the Mississippi regiment under Colonel Nathan “Shanks” Evans, took notice of this. The regiment than proceeded to take advantage of the Union troops mistake and begin to fire on them. To further, the problem, there was much misunderstood communication between Union officers already there and reinforcements on the way. The small number of boats also contributed to the problem that occurred at Ball’s Bluff.

Evans eventually was able to have the commander, mortally wounded and as a result, this made the Union forces disintegrate. Eventually, they had no choice but to retreat from that advancing armies of such. Many died trying to swim to Maryland via the Potomac by enemy fire. 553 Union troops were taken prisoner, while only 200 Confederates were captured, killed, missing or wounded. Learning from this battle, Congress gave more authority to Union officers for major decisions.