Opened in 1881 on the day after Christmas, the Bird Cage Theatre was originally intended by its owners to be a family-friendly entertainment establishment. However, the heavily male demographics of Tombstone's mining community led to the Bird Cage becoming known as the "wildest, wickedest night spot" in the West. A reported 26 people were killed in shootouts at the Bird Cage, with 140 bullet holes littering the walls. The theatre was also known for its prostitution and gambling. The longest poker game in history- lasting 8 years- was played in the theatre's basement. The Bird Cage Theatre closed in 1889 after the silver mines shut down. When the building was purchased in 1934, the new owners found that everything was left exactly as it had been in the 1880's. Today, the Bird Cage Theatre operates as a museum, tourist attraction, and favorite destination for paranormal investigators. 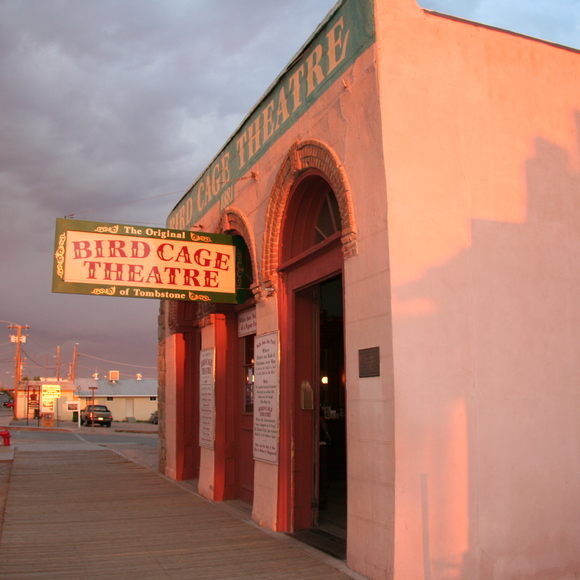 Interior of the Bird Cage Theatre 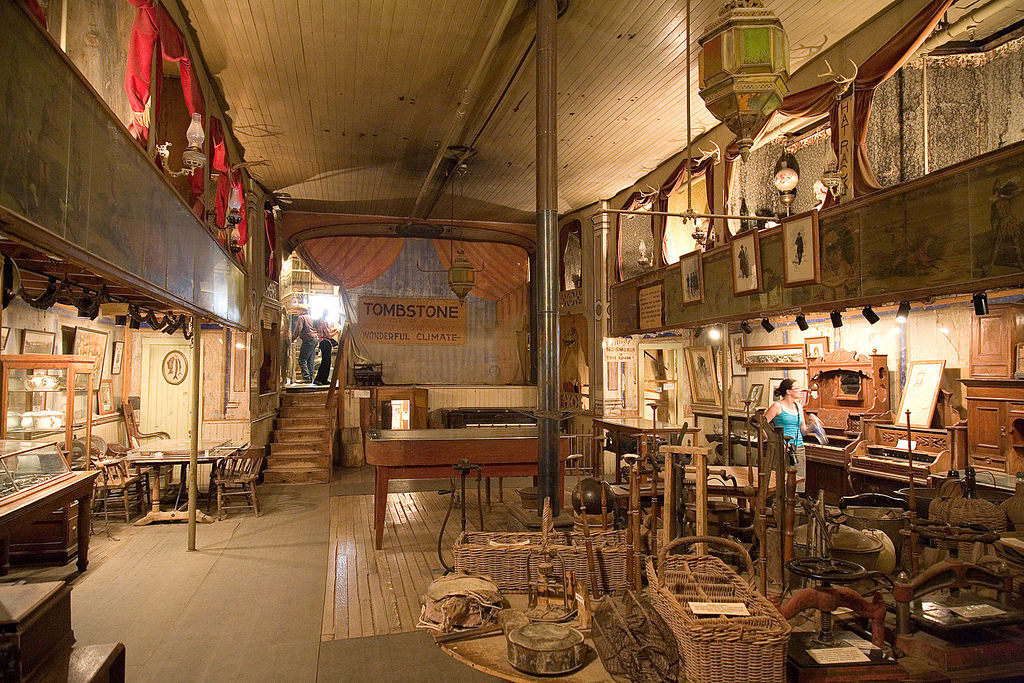 Table where the longest poker game in history was played 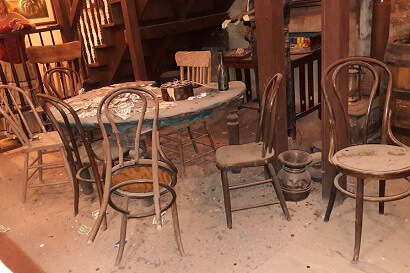 Booths where prostitutes at the Bird Cage worked 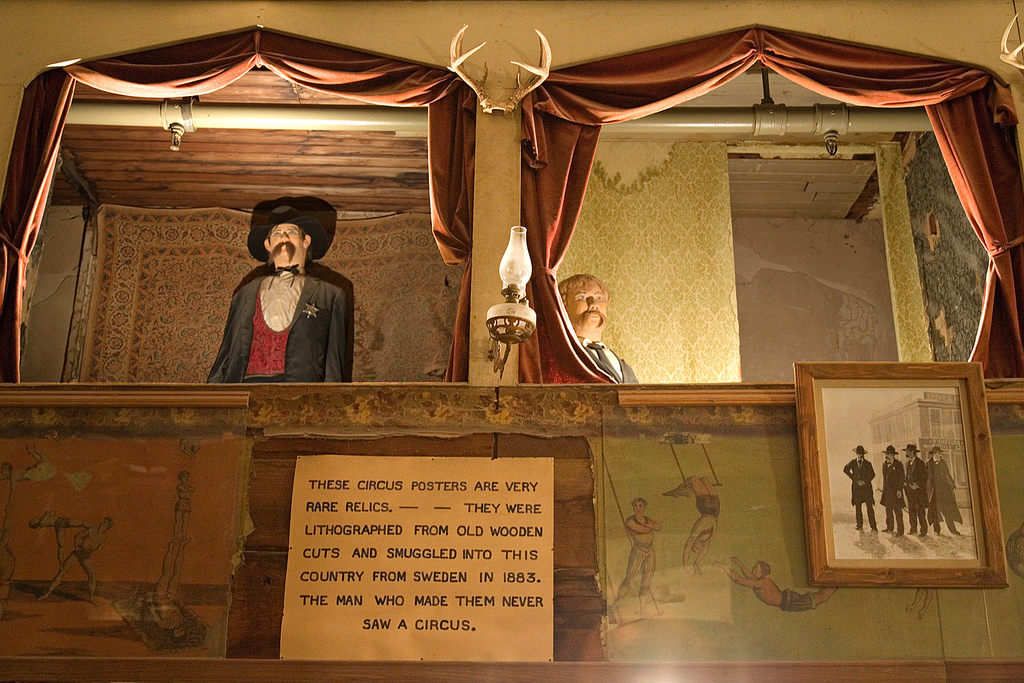 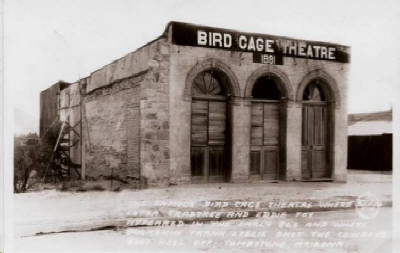 The town of Tombstone was founded in 1879 and quickly became a "boom town" due to its lucrative silver mining industry. By 1881 the population had boomed to 1,000 citizens and by 1882, it had a population between 5,000 and 15,000 people. The Bird Cage Theatre was established on December 26, 1881 by Lottie and Billy Hutchinson. The Hutchinsons intended the Bird Cage to be a family-friendly variety show theatre, as was evident in their first event- a free “Ladies Night” for the respectable women of Tombstone. However, in a mining town mostly populated by unmarried men, the theatre was unsuccessful and the Hutchinsons sold it to Hugh McCrum and John Stroufe after a few years. In January of 1886, the Bird Cage Theatre was sold again to John Bignon. Bignon renamed the theatre the “Elite Theater” and remodeled the facilities. Under the management of Bignon and his wife, who was known as “Big Minnie”, the theater started catering to the miners’ more vulgar and adult sensibilities.

Open 24 hours, seven days a week, the Bird Cage began featuring acts such as Mademoiselle De Granville’s “Female Hercules” performance as well as various cross-dressing comedy routines and musical acts. Prostitution also became an integral part of the Bird Cage Theatre's business model thanks to Bignon and his wife (who worked as the madame). Curtained balcony booths upstairs were occupied by the Bird Cage's women. It is said that the women would hang cribs in the gambling hall for their babies to sleep in as they saw their clients. Today there are 14 cribs still hanging along the sides of the gambling hall. The Bird Cage’s reputation for heavy drinking, sex, gambling, and violence was nationally renowned, with The New York Times even calling it the “wildest, wickedest night spot” in the West.

The Bird Cage is perhaps best known for hosting the longest poker game in history in its basement. Notable players included Doc Holliday, Wyatt Earp, Bat Masterson, Adolphus Busch, Diamond Jim Brady, and George Hearst. The game required a down-payment of $1,000 and was played continuously, 24 hours a day, seven days a week for eight years, until the Bird Cage’s closure in 1889. An estimated $10 million was exchanged during the course of these years, of which the Bird Cage Theatre retained roughly 10%.

Another cause for notoriety for the Bird Cage is that, over the course of its eight years of operation, 26 people are said to have been killed there. The theatre’s plaster walls are littered with over 140 bullet holes. Those killed were transported to Tombstone’s famous Boothill Cemetery in The Black Moriah, the town hearse, which is stored at the Bird Cage Museum today. Gilded with 24k gold and sterling silver, The Black Moriah was the first vehicle to feature curved glass on its sides. It carried notorious outlaws- such as the McLaury Brothers after their fatal gunfight at the O.K. Corral- to their graves at Boothill.

In 1886, Tombstone’s Grand Central Mine hoist and pumping plant burnt down. Without railroads to connect it with the rest of the country, Tombstone quickly found itself isolated and without industry. By 1890 the US Census says that Tombstones population had dwindled down to 1,900. The Bird Cage Theatre closed in 1892. When the building was purchased in 1934, the new owners discovered that it had been abandoned exactly as it was forty two years earlier. They then opened the Bird Cage Theatre as a museum, which is still open today. Purported to be one of the most haunted buildings in the United States, in recent years the Bird Cage Theatre has been featured on popular paranormal investigation TV programs such as Ghost Hunters, Ghost Adventures, and Fact or Faked: Paranormal Files.