College of Medicine of Maryland

The College of Medicine of Maryland, also known as Davidge Hall, has been used to teach medicine since 1813, making it the oldest medical school building in the country still in use. Davidge Hall is a rectangular, three-story building that features a circular dome. Inside, it contains an anatomical theater, one of the oldest surviving ones in the Anglophone world. Traditionally, anatomical theaters such as this one are designed with a dissection table in the center surrounded by tiered seating for students to observe. Learn more about the College of Medicine's (often tumultuous) history in the video below.

College of Medicine of Maryland 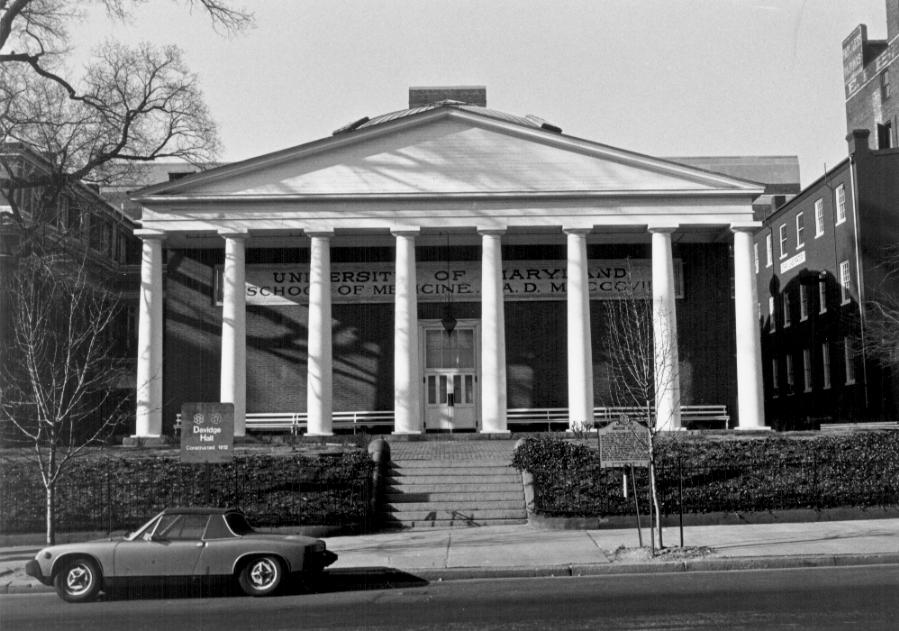 Charles Wiesenthal established Maryland's first medical school after arriving in Baltimore in the 1750s. He set up a laboratory, in which students attended lectures and learned anatomy, in part through performance of dissections, a practice that was somewhat controversial. In 1788, an anti-dissection crowd burst into the laboratory and dragged out the corpse.

Regardless, medicine in Maryland was becoming more professional. In 1788, the Medical Society of Baltimore emerged. In 1797, Dr. John Davidge moved to Baltimore, where he taught anatomy, physiology, surgery, and midwifery. Davidge, along with doctors James Cocke and John Shaw, decided the time was right to improve medical education in Maryland. They encountered setbacks--for example, the break-in and stolen cadaver from Davidge's anatomical theater at the intersection of Liberty and Saratoga streets. Nevertheless, their efforts eventually led to the construction of the College of Medicine building in 1812.

Design of the College of Medicine's anatomical theater is based on European precedents and the anatomical hall at the University of Pennsylvania, which was built several years earlier. The history of dissection as a teaching practice goes back centuries; see, for example, the work of Mondino de Liuzzi, anatomy professor in Bologna, who conducted his dissections in the 14th century. Alessandro Benedetti, who worked and taught in Bologna in the late 15th century, described the ideal anatomical theater as follows:

A temporary theater should be built at a large and well-ventilated place, with seats arranged in a circle, as in the Colosseum in Rome and the Arena in Verona, sufficiently large to accommodate a great number of spectators in such a manner that the teacher would not be inconvenienced by the crowd...The corpse has to be put on a table in the center of the theater in an elevated and clear place easily accessible to the dissector.
(quoted in Cambridge History of Science, 275).