Listed on the National Register of Historic Places, this is the grave of abolitionist, suffragist, and humanitarian Harriet Tubman, who died in 1913. Harriet Tubman worked to guide over 300 slaves to safety and was a firm believer in the abolition of slavery. Harriet Tubman's grave was erected by the Empire State Federation of Women's Clubs and is located in Auburn, New York.

Harriet Tubman died of pneumonia in 1913. 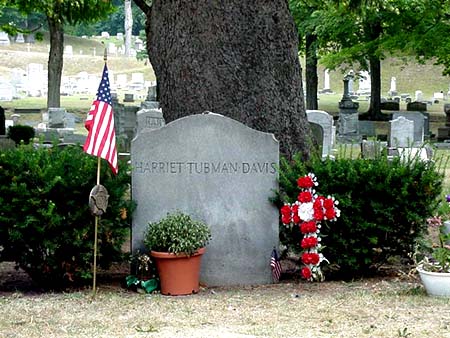 Harriet Tubman made an estimated 19 trips to free slaves. 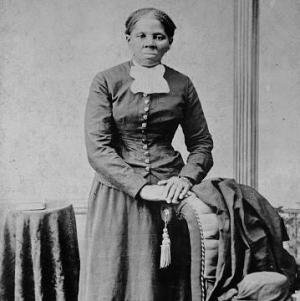 The grave is situated on the western corner of Fort Hill Cemetery. The cemetery inters many other well-known people, including William H. Seward, who served as Secretary of State under Abraham Lincoln and Andrew Johnson (1861-1869).

Harriet Tubman was born in in 1822 with the name Araminta Ross. She was born into slavery to slave parents named Harriet Green and Ben Ross. Harriet was owned by a woman named Mary Pattison Brodess. Harriet Green and Ben Boss had nine children together; three daughters were sold to another family, separating them. Harriet Tubman was rented as a young child to a woman named Miss Susan. Harriet’s job was to take care of Miss Susan’s baby during the night. If the baby cried, Harriet was whipped. The whippings left her with severe scars for the rest of her life. Harriet started wearing thick clothes as protection, fighting back, and running away. Throughout her childhood, Harriet Tubman was hired to various masters. While she was working, she suffered a severe head injury when she was hit with a metal weight. For the rest of her life, she suffered from seizures, headaches, visions, and vivid dreams. This diminished her value as a slave.

In 1844 Harriet Tubman married a free black man named John Tubman. She took his last name and began using her mother’s name Harriet. In 1849 Harriet’s owner passed away. Instead of waiting on the possibility of being sold, Harriet escaped with her brothers, Ben and Henry, on September 17, 1849. Later, her brothers experienced guilt and returned with Harriet. This did not stop Harriet from escaping again soon after. Harriet used the Underground Railroad to escape and the North Star to provide direction. She eventually made it to Pennsylvania, a free state.

Once Harriet was in a free state, she began working odd jobs in Philadelphia, Pennsylvania. However, she felt that her family in Maryland should also experience freedom. Despite the Fugitive Slave Law of 1850, she began rescuing family and other slaves beginning in December 1850. With each trip back to Maryland, she became more confident. On one return trip she discovered that her husband had married another woman, and her husband refused to go with Harriet. Soon, Harriet’s trips between Maryland and Pennsylvania turned into guiding former slaves to Ontario, where the Fugitive Slave Law of 1850 was not in effect.

It is estimated that Harriet Tubman made 19 trips and guided over 300 slaves to safety. In 1903 she donated her personal land to the church for the founding of Harriet Tubman Home for the Aged, which opened in 1908. In 1911 her health began to decline, and she moved into the aged home. She died of pneumonia in 1913 and was buried at Fort Hill Cemetery in Auburn with semi-military honors in Auburn, New York.