On December 17, 1862, Union Brig. Gen. John G. Foster's expedition began destroying the tracks leading to the Goldsborough Bridge in an effort to break the main Confederate supply line. The Confederates were able to delay the destruction but it could not be prevented. It is estimated 220 men lost their lives in this battle. This battle field has been well preserved and hosts school events and reenactments throughout the year.

Location of the Battle of Goldsboro Bridge 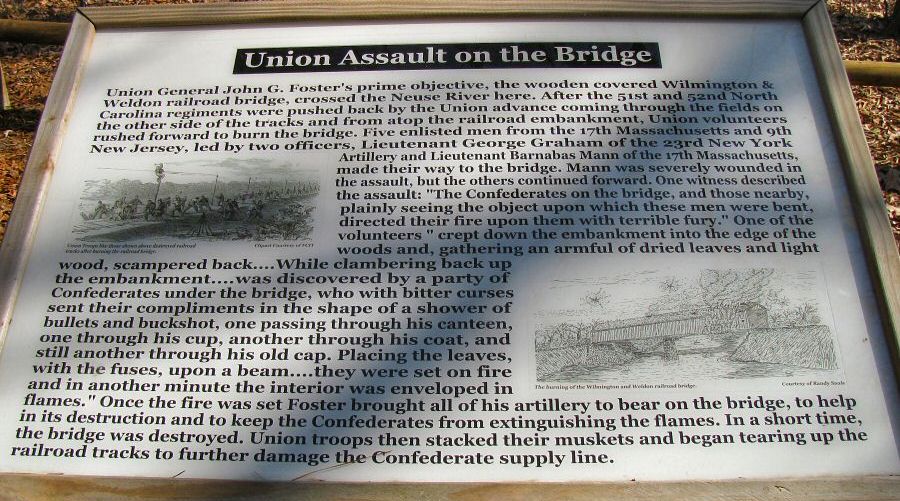 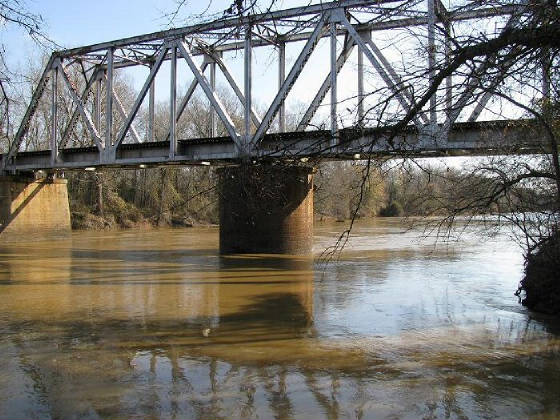 The Goldsborough Bridge spanned the Neuse River and was used by the Wilmington & Weldon Railroad. In 1861-1862 this bridge was an important link that moved supplies and men to and from the port of Wilmington. It was also a connection from the states of the Deep South to the Confederate forces in Virginia. Both the Union Army and Confederate forces wanted to fortify the strategically significant Wilmington and Weldon Railroad Bridge.

Union Brig. Gen. John G. Foster began a series of raids on December 11th, 1862, when he marched his troops inland from New Bern, fighting the Confederate forces all the way. The Confederates were outnumbered in men and guns and were rarely able to hold their position.

As they neared the bridge on December 17th, the Confederate brigade of Gen. Thomas Clingman prepared to defend the bridge with less than 2000 men. The Confederates were lining the woods leading up to the railroad bridge when Foster fired at them with his cannons. Clingman pulled his men back under this attack; however the fighting was far from over. The Union forces kept firing and fighting and pushing forward. Even though the Confederates had far fewer cannons, they continued firing their guns and the one cannon they had mounted to a railcar. The fighting was bloody and violent. Within two hours the Union forces had reached the bridge.

The Unions objective was to destroy the bridge and with it, so they thought the Confederates lifeline. Each time a man ran forward to set the bridge on fire, he was shot by a southern sharpshooter. Finally, Lt. George W. Graham and Lt. B.N. Mann got the fire underway on the bridge but Mann was injured. General Foster ordered all cannon fire on the bridge to keep the Confederates from extinguishing the fire. When he was satisfied it was fully emblazed he began his withdrawal from the battle field. However Foster was unaware that additional Southern troops had arrived for a counter-attack using another bridge. As they were preparing to leave, the Confederates came out of the woods and charged with a rebel yell and waving their flags. As the fighting continued the Southern troops broke a dam and flooded the field between Foster’s main force and his rear guard. They were able to escape only by wading through neck-deep water in freezing temperatures.

The total Union casualties in the Battle of Goldsborough Bridge were 92 killed and 487 wounded. The Confederate losses were 71 dead and 268 wounded.

While the Battle of the Goldsborough Bridge was a Union victory, the destruction of the railroad bridge was not as successful in creating the devastating impact the North had hoped.

The included video is an hour long informative video detailing the various aspect of this battle. It includes specifics of the Union and Confederate uniforms, the typical food and utensils they used, an interview with a descendant of the battle and a reenactment. Replicas of the medical "equipment" presented in this video indicate the crude conditions these men dealt with on a daily basis. This video was made during the 150th Anniversary Reenactment on December 15, 2012.