In 1811, Joseph Smith Jr. and his family moved from there home of Sharon, VT, to this location in West Lebanon, NH, due to economic hardships as farmers in the Sharon area. The moved to West Lebanon was to try farming out again in a new area. During the winter of 1812-1813, a typhoid fever outbreak reached the town and affected some of the Smith family members, Joseph Smith Jr. being one of them. He recovered but suffered from a bone infection as a result which had to be operated on, at the age of seven. This experience became a critical moment in Joseph Smith Jr.'s life. Soon afterwards, they returned to Vermont then on to Palmyra, New York.

What is believed to be his home in West Lebanon as it looked in the 1960s before it was torn down so that a gas station could be constructed. 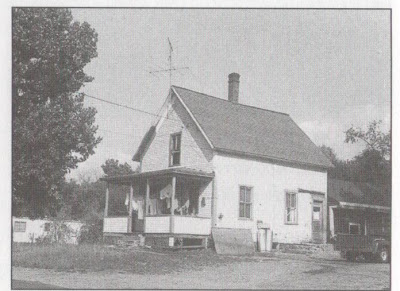 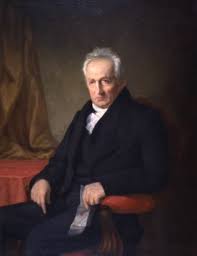 Painting depicting Joseph Smith Jr. being held by his father before the surgery. 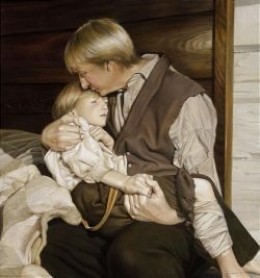 When Joseph Smith Jr. was 5 years of age, his family suffered from a failing crops and being cheated by a business associate while they lived near Sharon, Vermont. These economic hardships forced the Smiths to move for another chance and to pay off debts and so forth. The family moved across the Connecticut River into West Lebanon, New Hampshire and rented a house. The area at the time was the outskirts of town. Here, Joseph Smith Sr. and the oldest Smith children farmed right away. However in little over a year later, a typhoid fever outbreak came to the region. It is not quite known to this researcher and Clio entry creator,  how this fever came to West Lebanon, but what is know is that in its wake, over 6,000 people would die and all the Smith family members would be affected by the outbreak, with older sister Sophronia would almost die and Joseph Smith Jr. would also be seriously ill. In the end, all would survive, yet as the fever broke from Joseph, yet some of the fever got into his left tibia, infecting it and causing painful swelling for over two weeks. This infection is now known as osteomyelitis.

There were many attempts to reduce the swelling, yet all failed and it was suggested by many caring for the family that the leg should be amputated. Fearing this, the Smith family sought another means to end the infection, but spare the leg. That alternative arrived by the name of Dr. Nathan Smith (no relation), a prominent physician from Dartmouth Medical College in Hanover, NH. Older brother Hyrum Smith attended the same college around this time, so it is believed he had developed a friendship with Dr. Smith, which led to his arrival and suggestion that he could perform a new, and at the time controversial, procedure of removing the infection portions of the bone and binding it, rather than taking the whole leg. The family agreed, and at age seven, Joseph Smith Jr. would go under the knife in his home. He was offered whiskey to numb him, but he refused, only asking that his father hold him, while his mother left the house as to not see the procedure nor hear his discomfort.

However, the bone had to be broken in order for the procedure to work and having screamed, she ran in, only to be removed. In the end the surgery was a success. It was then advised that Joseph Jr. was to go to a relative's house in Massachusetts along the shore to recuperate. The healing and rehabilitation took an unknown number of weeks and months, but he healed and met his family in their new home in Norwich, VT. The surgery caused Smith to use crutches for most of his childhood and left him with a pronounced limp, yet he lived to be strong and in robust health. Before his prayer in a grove in 1820 while in Palmyra, New York, where he had a vision of God and Jesus Christ and was called to restore the church of Christ onto the earth, this sickness and surgery was really the only defining moment in his life.