Following the devastating American Civil War, the Creek (or Muscogee) Nation passed a constitution in 1867 that created a democratic government with three branches. To accommodate the Creek legislature, a log cabin meeting house was constructed downtown in the newly designated Creek capital of Okmulgee. In 1878, a fire destroyed the wooden structure, and it was replaced with the sandstone capitol building still standing today. The Council House housed both the Creek legislature and Supreme Court. It continued to serve the Creek Nation until 1907, when the Creek Nation was abolished by the U.S. government and Oklahoma established. The Council House began use as a museum in the 1920s, and in 2010, it was reacquired by the Creek Nation, who continues to use it as a museum today. 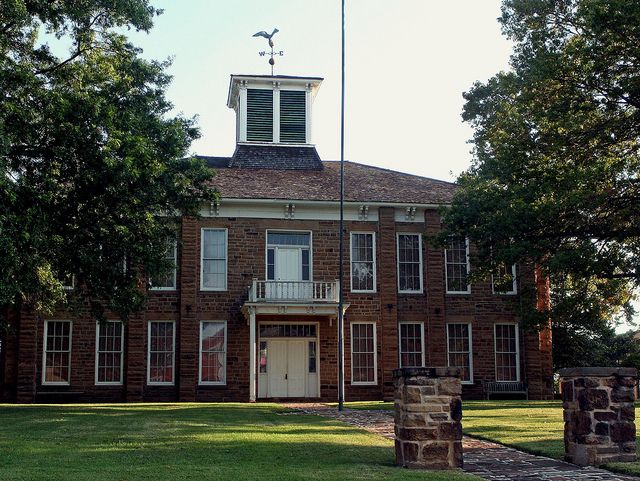 The American Civil War devastated Creek (or Muscogee) Nation. Forcibly removed to Indian Territory in the 1830s, the Creeks established themselves in central Indian Territory (present day Oklahoma). At the outbreak of the Civil War in 1861, political and cultural divisions tore the tribe in two. Some Creeks allied and fought for the Confederacy, others fought for the United States (the "Loyal" Creeks). During the war many Creeks became refugees, reliant upon either the U.S. or Confederate governments for food to survive. Creek Nation itself was ravaged by the war, and as Creeks returned to their homes at war's end, they faced destitution.

Not only did the Creeks face the physical task of rebuilding farms, homes, towns, etc., they also had to rebuild a civil society torn by civil strife. Indeed, at the end of the war, Loyal Creeks and former Confederate Creeks were so divided that the Loyal Creeks wanted to separate and create their own distinct Creek Nation. The U.S. government kept the Creeks from splitting politically, but partisan divides remained.

In 1867, the Creek Nation adopted a new constitution that embraced representative government similar to that of the United States, consisting of executive, legislative, and judicial branches. The Creeks would be governed by Principal and Second Chiefs, a bicameral legislature comprised of an elected House of Kings and House of Warriors, and a Supreme Court. That same year, the Creeks built a log cabin capital building in their new national capital Okmulgee (a variant of Okmvrke, Muscogee for "boiling water").

In 1878, a fire destroyed the log cabin and a two-story sandstone Council House was constructed to replace it. The stone capitol housed both the Creek legislature and the Creek Supreme Court. The Council House also occasionally hosted the Intertribal Council, comprised of representative from many of Indian Territory's tribes.

Over time, Creek sovereignty was challenged by both white settlers and the United States government. The construction of a railroad through Creek Nation in 1872 brought an influx of white settlers. In 1890, Oklahoma Territory was created from western parts of Indian Territory; Indian Territory remained in the east (giving rise to the "Twin Territories" of the region). In 1906, the United States government abolished Creek sovereignty, ending the Creek Nation and its government. In 1907, the two territories were united into the State of Oklahoma. The Council House passed into the hands of the U.S. Department of the Interior, then the City of Okmulgee.

Though no longer the seat of the Creek Nation, the Council House remained important to the Creeks. In 1923, the Creek Indian Memorial Association established the Creek Council House Museum in the building. It was designated a National Historic Landmark and added to the National Register of Historic Places. In 2010, the Muscogee (Creek) Nation reclaimed the property, and it is today managed by the Muscogee (Creek) Nation Cultural Center & Archives.