Currently home to the Center for the Arts at Virginia Tech, this brick building was constructed in 1934 as Blacksburg Elementary School. The elementary school was open to whites only, even after the 1954 Brown v. Board decision required school integration. The University purchased the building in 1965. Prior to the construction of the elementary school, this location was home to the Blacksburg Female Academy (later the Caldwell Masonic Female Institute), a private school for women that was organized in 1840 and operated until 1908. Once the university purchased the building in 1965, it was used by student organizations for several years; then the media relations, marketing and publications departments occupied the building until 2017. 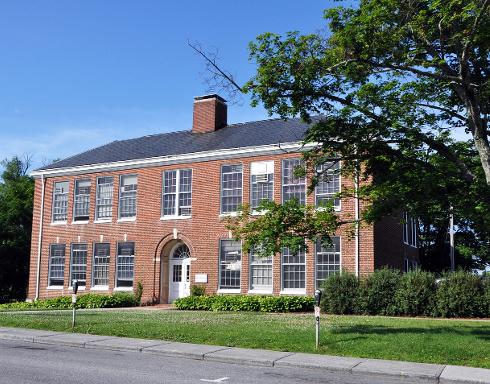 This site has long been home to educational institutions, beginning with Blacksburg Female Academy, which was incorporated in 1840 by a legislative act. The prominent Black family supported the founding of the school and provided its brick building. In 1858, the name of the school changed to the Caldwell Masonic Female Institute when it was sold to the Hunter's Lodge of Free and Accepted Masons. The school operated until 1908. Blacksburg Elementary School was eventually built on this spot in 1934, and this is the building currently standing there.

In 1965, Virginia Tech purchased the building, along with the neighboring buildings that it calls the Agriculture Annex and Media Annex (formerly Blacksburg High School and Montgomery County School Board Agricultural Building, respectively), for a total of around $300,000. While other construction was taking place on campus, these buildings were vital for temporary use. From 1966 to 1969, student organizations used the building while Squires Student Center was being renovated, and eventually the campus university relations department moved its offices there. In 2017, the Center for the Arts at Virginia Tech moved into the building.

A similar institution to the historical Blacksburg Female Academy in the area was the Montgomery Collegiate Institute/Montgomery Female College, which operated in nearby Christiansburg, Virginia. The two institutions were unaffiliated.